A Son's Promise and a World Record Sitka Blacktail 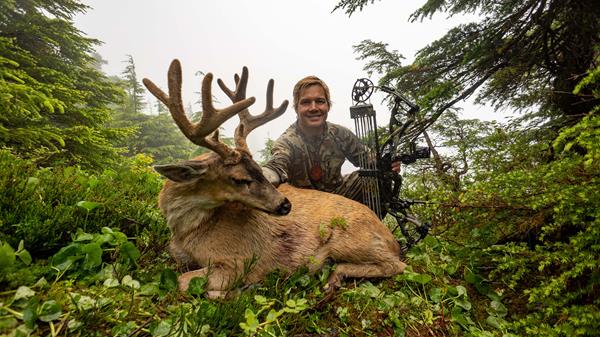 Early in my bowhunting journey, I read a lot about hunting Sitka blacktail deer. Bowhunters like Chuck Adams and Jack Frost seemed obsessed with these little island deer and wrote amazing stories about their DIY adventures in Alaska. Their stories sparked my need for adventure. When I decided it was finally time to work on harvesting a blacktail, I knew I wanted to have an adventure like Chuck and Jack and go self-guided into remote Alaska. I also wanted to arrow a really big one like they had both done. The ultimate goal, I concluded, would be a Pope & Young Booner. This is what I call animals that qualify for both all-time record books.

My schedule cleared up in 2018, and my 16-year-old son, Jake, and I planned a two-week backpacking adventure to bowhunt blacktails in the early season alpine. We were dropped by a floatplane by a remote lake on July 30th. As luck would have it on opening day, Jake arrowed a gorgeous 5x5 non-typical. It was his first animal to qualify for the Pope and Young record book. I could see Jake’s joy as he stood over his buck for the first time and put his hands on those beautiful velvet antlers. He was so proud and so thankful.

He said, “Dad, I’m so grateful for this experience and opportunity you’ve given me. I want to pay you back with a promise that I will stay with you and help you find your big buck, no matter how long it takes! I won’t get impatient or want to go home. I’m here with you until we get it done.”

As a father, these were some of the sweetest words I’d ever heard. My 16-year-old understood and was willing to give it all in the tough backcountry to help his old man accomplish a dream. After arranging a pickup of Jake’s deer meat, we climbed back into the alpine. Both of us were ready and determined to do whatever it would take to find a giant buck.

Over the next 12 days, Jake and I endured some very tough conditions and explored some beautiful but intimidating country. Ultimately, we camped on five different peaks, endured gale force storms, and spent countless hours behind glass. We were fortunate to look over 120 different blacktail bucks.

On the twelfth day, I reflected on the awesomeness of the trip as I sat on the edge of a cliff 80 yards above the biggest buck either of us had ever seen. He was taking a midday rest with a few of his buddies. When he finally stood, I placed a perfect arrow in his vitals and Jake watched him fall as he glassed from a lookout above me. That 2018 buck scored 103 3/8" P&Y and received the Club’s First Award at the 2019 convention in Omaha, Nebraska. Although he was short of my dream 108"B&C all-time minimum, he was a beautiful deer that meant a lot to Jake and me. The two bucks we harvested on that trip will always be displayed together in our home.
The bright side of missing the B&C minimum was that our adventure would continue. Unfortunately, Jake wasn’t able to hunt with me in 2019 due to school commitments. Luckily for our ongoing goal together, the buck that I killed also fell just shy of that magic 108" mark.

In 2020, Jake and I decided to go back to the same spot we hunted in 2018. We were accompanied by Jake’s friend, Tyler Rose, and my buddy, Luke Johnson, who was taking pictures. We were pounded by copious amounts of rain and fog and ended up stuck in our tents. When we finally got out to hunt, the fog and rain continued to roll in and out, posing a big challenge for glassing. The conditions were some of the most frustrating I’ve ever dealt with. There were multiple three-day stretches where we didn’t hunt at all. I was also frustrated because I wanted the boys to have fun. The only consolation was that their toughness and patience was being tested to the extreme, which was also a goal of the trip. I just hoped it wasn’t too much. I was relieved to see that they stayed positive and entertained playing cards and Yahtzee.

Thanks to everyone’s good attitude, we jumped on every opportunity to get out and hunt, even when the weather wasn’t ideal. On one such occasion, we decided to move camp deeper into the mountains. As we walked through mixed fog in a historically good deer area, we found a very defined deer trail and some large, smoking- fresh buck tracks. As we followed the trail across a main ridge, I spotted antler tips about 75 yards out. We dropped into the tall alpine grass and glassed ahead. There were a few bucks we could see that looked pretty nice. I was about to ask if either of the boys wanted to stalk one of them when a giant buck appeared with the group from behind a rise. As we looked over the bucks, I was undecided on what to do. I really wanted to watch the boys make a stalk. Luke got my attention and snapped me out of my indecisive trance. He looked directly at me and said firmly, “Allen, you need to shoot that buck!”

One of the bucks had noticed our movement and started to walk off. The herd divided as a few bucks went up the ridge, while two dropped down the ridge toward a saddle. They were suspicious of something but moved slowly and didn’t know exactly what was wrong. Luke and I used the contour of some draws to get closer. The big buck was not in either of the groups that were moving off. We slipped into the area where we’d last seen him, but he remained out of sight. There was only one very small draw left. Did he somehow sneak out on us? I felt pretty strongly that we would’ve seen him leave, yet it was hard to believe that he was completely hidden in that one small cut. We crawled to within 10 yards of the lip of the draw. I decided to be patient and wait. If he was in the draw, there was no way for him to leave it without showing himself inside my bow range, and I felt it was risky to try to peek down into the draw.

We waited several minutes, and I began to lose hope. Both visible groups of bucks were moving away more quickly now. I looked back at Jake who was glassing my position from our original spot. He gave me an encouraging gesture. Suddenly, a small buck fed out of the draw 14 yards in front of us. He saw us and started to stiff-leggedly walk the rim of the draw. I knew it was likely that the big buck would follow him out. My muscles tensed with my release hooked on the string. I settled my bow grip into that familiar place on my left palm. This was going to happen fast, and I was way closer than I wanted to be.

Within moments the big buck slumbered out of the draw with his nose in the grass feeding. As I came to full draw, he saw the movement and looked my way. However, his reaction was too late and my arrow smashed through his ribs from 14 yards. He sprinted down the ridge and bailed into some timber where I would find him an hour later.
As the boys and I celebrated and took photos of the giant buck in the pouring rain, I told Jake that I thought we might be looking at a new P&Y velvet world record. He couldn’t believe it, and honestly, neither could I. The blacktail was later scored by a panel of Pope and Young measurers. It was determined to be the new World Record Velvet Typical Sitka Blacktail with a net score of 108 1/8" and a gross score of 116 3/8".

I thought back on the three-year journey and on the nearly 30 years of dreaming of this adventure. I thought of the hundreds of bucks I had looked over and the time spent bonding with my son and of his promise to stick with me to the end. Our journey made a complete circle. We ended where we started, on the same ridge as Jake’s first P&Y animal, within a couple hundred yards of the exact spot where he thanked me with a promise, one that he had just fulfilled.

The circles of human influence are an integral part to the magic of hunting. The way others inspire us and the way we inspire them are the fiber of what fuels our passion in the field. Thank you, Chuck and Jack, for telling stories nearly 30 years ago. Without those, I would never have had a dream to chase. Thank you, Jake, for being with me and living that dream. I hope that someday you’re able to inspire your own child’s life and pass the baton of adventure-seeking to yet another generation.