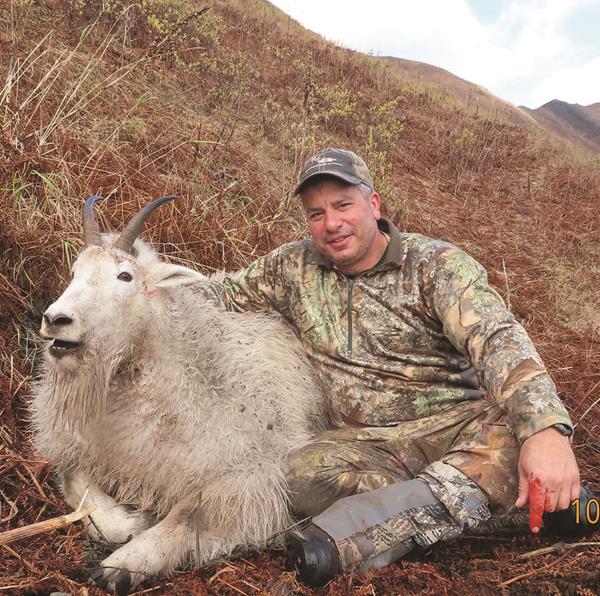 This hunt started out like many others I’ve been on with Al. “Come on, Chuck, we can do this. It will be tough, but I know we can get it done.” This was in 2017, and we booked a Kodiak mountain goat hunt with outfitter/guide Scott Milleur for October 2019.

October 6, 2019, we flew from our hometown in upstate New York to Kodiak, Alaska. On the 7th, we took a floatplane to our camp on Karluk Lake. This is where we met Scott and guide Bill. We settled into camp, which was set up on the edge of the lake. In no time, we were watching a couple dozen bears dining on the salmon all around the lake. While eating dinner in Scott’s cook tent, we chatted about the hunt, safety, our expectations, etc.
Tuesday, the 8th, was going to be our first day out on this six-day hunt. However, we got fogged in, and Wednesday produced the same results with fog and high winds. We couldn’t see the mountains at the bases, let alone the tops while looking for some goats. The forecast looked good for Thursday, but Friday was expected to be foggy with very high winds again.

We were all excited and up and at it early Thursday morning. Al, our guides, Scott and Bill, and I started cruising the lake looking for a mountain with goats that we could climb. We were glassing and trying to figure the wind for a stalk. Al and I wanted to watch each other stalk and shoot, so we decided to hunt together. After glassing multiple mountains around this lake, we found one with a few good billies on it. Scott and Bill thought there were two goats worth taking a closer look at. We beached the boat and set up the electric fence to protect it. This is where the hunt really gets going – two shooter goats on the same mountain! A plan was discussed and set in motion. We had to hike three hours up the river to the other top end of the mountain and then hike three hours up the mountain from that end. That was an easier hike for my knees, and the wind would be in our favor. We could also keep an eye on the goats and get plenty of looks to make sure they were worth going after.

The hike was going great, and Al and I were feeling good about our chances. Another look at the goats showed promise of possibly getting two. We made it clear to our guides that we wanted respectable goats but we were not here to break any records. This was my first goat hunt and Al’s second. His first goat hunt didn’t end well, and he had wanted to do it again.

As we neared the top and got within range of these beautiful creatures, Scott stopped and we discussed the plan. He told us to put all our layers back on and prepare for cold wind as we crested the top. This is where I told Al I was shooting first. I told him I was more worried about the hike down and didn’t think I could do this again tomorrow. His words to me were, “We are not coming down without two goats.” Obviously, he was exhausted too.
We crawled to the crest of the hill to prepare for the shots. One shooter goat was off to the right laying down. He was going to be my shot, and he was beautiful. The other was bedded behind some rocks out of sight to the left. The plan discussed and followed was that Scott would get my goat to stand up. I was to shoot him with Bill watching for the second goat to stand and make sure he was a shooter. The plan worked perfectly. My goat stood, and I shot as he turned broadside. Someone yelled, “You dropped him!” and I couldn’t find him standing any longer. Now, all attention went to looking for Al’s goat. Billy said, “He’s a shooter, the one on the left.” Al found him in his scope and shot. As the goat started stumbling around the rocks, Al followed up with a second shot and the goat rolled down the mountain. I didn’t think it was going to stop until it hit the river. It finally stopped rolling about 500 yards down the mountain on a very small shelf of grass.

All four of us start looking for my goat that supposedly dropped on the top of the mountain. To all of our disbelief, it was nowhere to be found. I was sick. Scott started to question my shot placement; I was sure of my shot. The wind had paused, and it was a 180- yard shot. However, I started to second guess myself.

We searched the top and a bowl off to the right for 30 minutes or so, and we then started to circle around the site looking for blood. We found blood off the edge of the mountain, but it was thought to be Al’s goat. As we stretched our search further around and off the mountain, Bill and I found some blood that had to be from my goat. It was in a very steep area. The blood trail got better, although the spots were far apart. He was rolling and bouncing pretty good. We still couldn’t find my goat, but the trail of blood said he was down there and dead.

Bill was the first to spot him. He had rolled deep into a small patch of young alder trees. We couldn’t see him until we got about 50 feet from him. He rolled down to the same plateau as Al’s goat, which was about 100 feet away now. As we tried to get my goat out of the trees so we could take pictures of our goats together, he shifted and rolled down a few hundred more feet. At this point, we decided we couldn’t get them together. It was too steep and dangerous.

We all went to Al’s goat, celebrated a little more, and took some pictures. After caping and packing the meat, it was off and down to my goat. It was getting late, and we were starting to get nervous about dark. Quick pictures with my goat and caping and packing the meat, and then we were off. I couldn’t walk down the mountain. My knees wanted to buckle out, getting caught in the grass. Sliding on grass and under bushes and trees, I wore a hole in my pants and the bottom of my backpack. Al tried to drag his backpack instead of wearing it. The cape-loaded pack was too heavy to keep balance hiking down. It got away from him a couple times and rolled much of the way down. We got to the valley bottom as the sun settled. We made the last exhausting hike to the lake edge, and finally, we were boating around the lake and back to spike camp.

The next morning, the weather was so bad that we couldn’t get a flight back to Kodiak. All flights were canceled due to fog and high winds. Another day of playing cards in the tent and all day to celebrate our successful hunt. We couldn’t believe it. We certainly didn’t plan it this way when the morning started, but we took two nice goats 15 seconds apart. We were truly blessed on this hunt.