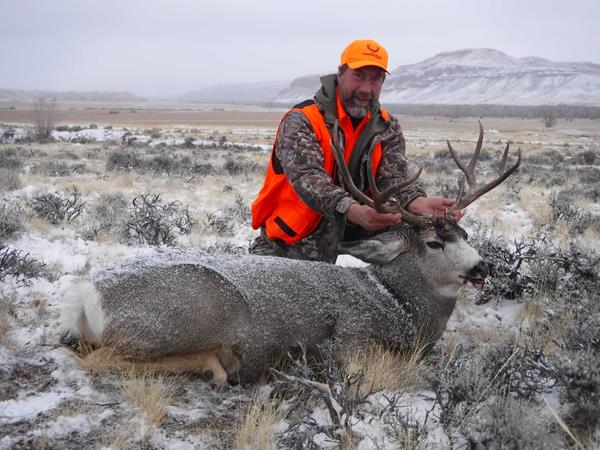 Do you ever have one of those hunts where you see so many animals that your eyebrows chafe from constantly throwing up your binoculars? Such was my experience in Wyoming!

I was sitting on max points for deer with the 2019 Wyoming application deadline coming up quick. As I looked through Huntin’ Fool, trying to map out my application choices, I noticed that one of the “Huntin’ Fool picks” was for a November rut hunt with pretty low odds (a.k.a. about 1%) of drawing for a non-resident max point holder. I studied the data for other unit options and ultimately made that longshot unit my first choice for the application submission. You know how the rest of that story goes when it was utter shock that the draw results showed “Successful.”

When composure was regained, I made that important call to Huntin’ Fool for the list of previously successful members. Boy was I surprised when “The Robert Hannemen,” Research Specialist and Hunt Advisor, was on that list! He returned my call and was genuinely excited that I had drawn the hunt. He shared with me invaluable information like places to stay, suggested places to hunt, and gave me great ideas and strategies on how to hunt those areas. A tool like onXmaps would be key for navigating the public and private lands, plus there was the Wind River Reservation land to respect. He also stated that I would see a whole pile of deer and many would be lovestruck 140-160" 4-points rutting hard, so it would take a lot of work and glassing to find an exceptional buck if that was what I was willing to hold out for.

The hunt ran November 1-20, and I decided to go during the peak of the rut, November 12-20. My first day afield was amazing. I watched a 4x3 take on a 4x5 and fight for over 20 minutes only 150 yards away. They locked horns and tossed each other in the air in mortal combat. A 28" 4x4 with a busted G4 on his left antler snuck in from across the river and stole some does. He was very tempting and only 250 yards away. By noon, my eyebrows were sore from the binocular use and I gave up on counting all the deer I was seeing and just kept track of 4-points or larger. I was at 20.

Midday was only slow for about 90 minutes. I was able to talk to a few people and hear stories about the animals they were seeing. At around 2 p.m., the does were back out en masse and the bucks were right there with them. By sunset, I had found 15 more 4-points. I had seen 35 4-point bucks my first day!

I reflected that night on the animals I had seen and started sorting out options and even nicknaming some of the bucks. However, aside from that busted up 28" buck, they were all nice but not what I wanted to put my tag on. My eyebrows were sore and my smile was wide, but I could tell this was going to be work and a game of patience.

Day two started with a lot of shooting action, just not mine. As I headed out to check for new bucks, hunters were already stationed at strategic vantage points and every buck that caught my interest for a second look was being shot right in front of me. I was surprised at the amount of hunting pressure. I congratulated the successful hunters on their harvests and helped an older gentleman get his into his truck. The deer taken were solid, mature bucks, and a few had some extras. The upside to all the shooting was that hunting pressure really tapered off from that day on. One hunter I met was actually keeping track of the deer harvested and informed me that only six people had not filled their tags yet. Day two was a wrap, and I had seen 27 4-points or better.

Day three was choice. It was snowing, and bigger bucks were starting to appear. What was even more choice was that they basically couldn’t care less about me. I could take my time watching and evaluating them and they were happy to oblige. One buck even laid down with a group of does at noon and was so exhausted that he laid flat on his side and I swear I could hear him snoring.

As each day came to an end, I found myself making mental notes of where the bigger or more unique bucks were and which ones would be my backup or last day bucks. Yet when I got to town, there was that buck in the back of one of the remaining tag holder’s trucks at the gas station as they were heading home. I started questioning if I was passing up too many nice bucks or if there would even be any bigger bucks left. As I was heading back to town at sunset on the second to last day, I saw a nice backup buck bedded at the edge of a field. He was a solid 4x4 about 25" wide. A mental note was made, and the day was over.

As the last day of the hunt started, I was starting to get worried. I was seeing the same bucks over and over that I had seen and passed on each day before and no big boys were anywhere to be found. The weather had been sunny and warm the past five days, and two other hunters and I were the only ones still with tags in our pockets. A cold front was moving in, but would it be too late for the hunt?

As I changed areas, I passed where the backup buck from the night before was last seen. To my amazement, he was now in the middle of the field, on his side and not moving. He was dead. Had he been poached? I could not see a bullet wound on him. As I drove down the road, a game warden was passing by. I flagged him down and showed him the buck. He did a field autopsy and determined this buck had been rutting and lost his life in a serious fight. There must be a really big boy out there to do that.

With only 90 minutes of hunting light left on the last day of this hunt, I was racing from vantage point to vantage point trying to find a shooter. With one hour left, it was starting to snow and I spotted about 50 deer. There were several solid bucks interested in the does. Right there in the middle of the herd was “the one!” His body was massive, he was totally focused on the does, and his antlers appeared to be a country mile wide. They extended way past his ears, and his brow tines had some serious character. One was even broken from fighting! Was this the victor from last night’s fight?

I managed to sneak in, and at 70 yards, I had a problem. There were does in front of and behind him and no shot. The wind was in my face and I was mostly hidden, so I waited and waited. Ten of the longest minutes of my life I waited. All of the sudden, they looked right at me and bolted. No! As they lined out, a clear shot presented itself and my Browning .300 WSM roared. The buck went down, and all I could see was his rack pointing up to heaven. When I got to him, I could see devil tine extras around the bases. I gave thanks to The Man Upstairs for the success of this hunt and His hand in my life.

I had to work fast to take pictures as I was alone and losing light and the increasing snow was building up everywhere. As I finished, a hunter I had met earlier that day came up with a deer sled, which is an industrial plastic toboggin, and we were able to roll the deer in. It was an easy pull over the snow, getting the buck out whole. The game warden from earlier that day stopped by, congratulated me on the deer, checked my tag, and recorded the deer as a 7x6 with an inside spread of over 27".

By no means was this hunt easy, but it was a lot of fun seeing so many deer each day. As I look at the European mount with friends and family, both my deer and my smile are still a country mile wide.