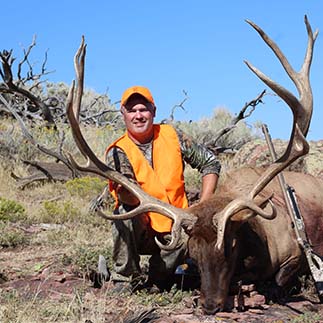 This story starts like all the rest, building points and applying for those once-in-a-lifetime hunts. With 27 elk preference points in Colorado, I felt like I had a chance to draw the one non-resident archery elk tag offered in unit 2. My son also had 27 points and put in for the one non-resident muzzleloader tag. My thoughts were to hunt the unit first and then he would hunt it in the future. Usually, it takes more points to draw the muzzleloader tag. Well, when the results came out, he had drawn and I had not. So much for trying to figure out the draw!

Since I am semi-retired, I had planned on spending a lot of time in the unit before the hunt. Little did I know that I would also draw the non-resident 13A Arizona Strip archery deer tag, which quickly changed my plans. Now the plan was for me to hunt Arizona, kill a monster mule deer, head to Colorado to do some scouting, and then meet up for the elk hunt. After 16 days of hard hunting on the Strip with a top outfitter in that unit and not firing an arrow, it was time to move on. So much for plans!

I usually spend the fall guiding elk and deer hunters out of Hayden, Colorado, about two hours from unit 2. That’s where I met my son, Bronson, grandson, Cody, and wife, Toni, five days before the season opened. I had some knowledge of the unit from an antelope hunt in the unit a few years earlier, but I was depending on the local guys I guide with. They had spent considerable time in the unit guiding and shed hunting. I also made arrangements with Wild West Outfitters to hunt some private land in the unit, and that turned out to be a big asset.

Scouting didn’t work out as planned as a freak snowstorm made scouting hard with low visibility and limited back road travel. Splitting up and covering as much ground as possible, we were able to find some bulls, but they were not the quality we were hoping to turn up until two days before the season opened. Bronson found a secluded valley with some rutting activity and bigger bulls than we had turned up anywhere else in the unit. He videotaped several of the bulls, and after reviewing the tape that night, we decided that one of the bunch might be a shooter.
The next morning, we split up again with Bronson going back to his valley to do some more filming and Cody and me traveling to other parts of the unit in search of the best place to be on opening morning. While we turned up nothing big, Bronson came back with news of two new bulls moving into the valley. Both were potential shooters! Now we had a starting point for opening day.

The next morning, we walked to the rim of the canyon at first light and began glassing, trying to get a look at the bulls that we had heard as we approached. Several of the bulls were in the bottom of the drainage, but the terrain made it impossible to get a look at them. Finally, we got a peek as they began working up the other side. It was the two bulls we were interested in. Both were 6x7, and they looked big! The two bulls were working toward each other, posturing and bugling at each other and the smaller bulls in the valley. They were 600 yards with no chance at getting closer, so we began to video them and took some pictures with the Phone Skope. Our goal was a 350" bull, and after waiting this long for a tag like this, we didn’t want to mess up. I quickly texted the pictures to my guide buddies to get their opinion on what class bulls these were. The reply was quick, “Shoot!” With no chance of getting closer, all we could do was wait for the bulls to start to move toward their bedding areas and wait for an opening. The bull Bronson liked picked up the only cow in the valley and moved to a small patch of trees to bed on the open hillside across from us.

A plan was made with me staying on this side of the valley to video and give hand signals as Bronson and Cody made the stalk up a drainage that should get them close to the bedded bull. Everything went as planned, and soon, they had set up 67 yards from the bedded bull. Both were lying flat on the ground with Cody running a video camera on a tripod above him and Bronson ready to shoot. With cameras rolling, Bronson let out a timid bugle to get the bull on his feet and into shooting position. The bull responded by getting up and facing the challenge, not the best angle for a shot. After what seemed like an eternity, the bull slowly began walking straight toward the spot where the challenge came from, but there was still no shot. At 50 yards, the bull stopped to look for the intruder and then slowly turned broadside. From my view, I saw the smoke and reaction of the bull long before I heard the shot. The bull took the shot like a tank with little reaction. I could see the spot on his side as he turned and slowly walked back toward the trees he had bedded in. I panned over and saw Bronson reloading and watched as he moved in for a second shot. The bull went another 50 yards after the second hit before going down. Man, these big bulls are tough! After the pictures, the work began with boning and packing. This is where you pay the dues for shooting an elk with no roads nearby.

After a late-night pack, we spent the next day taking care of the meat and resting. Since we were there, we spent time seeing some of the sights and scouting around for when I hopefully draw this tag in the near future. We never saw a better bull than the one we took, which grossed 359". It was a great hunt with three generations of family, and it will never be forgotten.