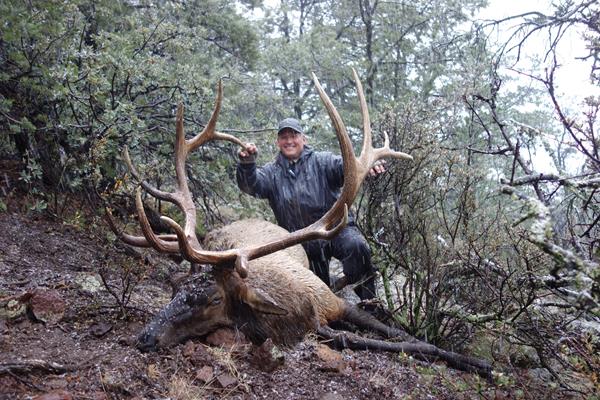 “Look what just popped up in my email!”

It was a normal day at work until I looked down at my phone to see that text from my dad accompanied by a screenshot of an email from the New Mexico Department of Fish & Game. Sure enough, 23 years of applying and he had finally pulled one of his dream tags. Hunting has always been a shared passion between my dad and me, so the secondhand excitement I felt for this hunt would make the next several months of anticipation both excruciating and wonderful. I think it’s safe to say that we have all had a very interesting and challenging year, so this tag was a nice glimmer of excitement to look forward to as we tried to navigate these strange times and maintain some level of normalcy in our lives. We wanted to take a few scouting trips but were unable to due to travel restrictions and work constraints.

My dad headed down a week early with my mom, and they spent the week catching up on lost time looking for bulls and learning the area. Someone had to stick around home to keep an eye on the family business, so I planned to work that week and drive down with enough time to get an evening glass in on Friday.

The trip down went smooth, and I found myself pulling into their camp around noon on Friday. They were both in very good spirits and just thrilled to be away from home and work for a while on their version of the perfect romantic getaway, but they had not found any “monster” bulls that my dad felt excited to chase. We looked over a map to figure out our plan for the afternoon glass. In my months and months of internet scouting, I had noticed a gnarly looking canyon that was about a mile or so hike from the nearest road. It looked like a good spot worth checking out. They hadn’t made it there yet, so I decided to check it out.

I had a great evening of glassing, highlighted by several small bulls bugling all around me, but I didn’t find “the one.” I was impressed by the terrain around the canyon, so even though I hadn’t seen a big bull that night, I felt confident that the area could easily be holding one. When I got back to camp, I told my parents that I planned to go back there in the morning. They decided to come with me since they hadn’t been finding much elsewhere.

Opening morning turned out to be a bust. The elk I had seen the night before had passed through. We found a few small bulls on the opposite side of the canyon but nothing else. We returned to camp and started working on a plan for the evening hunt.

We decided to go back to a place they had found earlier in the week. There was a high peak not far from a trailhead where I could watch from afar while they walked along a ridge nestled down in a timber-covered valley. I sat on the hill for about two hours before I saw a small, young bull feeding alone. I continued to search and only picked up one other bull. I was starting to think that the evening was a bust. About 30 minutes before dark, I spotted an elk on a distant hillside with my binoculars. As soon as I got my spotter set up on him, I knew we had found a truly special bull. Even from about a mile and a half away, I could see his massive, beautiful antlers swaying around as he tossed his head, looking for food. Seeing him made my heart race! I couldn’t wait to tell my parents what I had seen.

About 10 minutes before dark, I was watching the bull feeding when out of nowhere a massive cloud of dust erupted behind him. The bull spooked over the ridge, and I felt an overwhelming sense of disappointment. I thought that another hunter had found and shot at the bull, which meant that they would be in hot pursuit until they found him. I returned to camp and waited to break the news.

Before I could even speak, my dad’s first words to me were, “Man, did you hear me shoot? I just saw the biggest bull I’ve ever seen.” Turns out it was him back in there shooting at him! He overcompensated on his holdover, which made the shot sail over the bull’s back. That night was a somber one in our camp as we sat in silence thinking about the bull that we had just watched run away, potentially to never be seen again. All we could do was look at a map and make a plan for where we might find him in the morning. I picked a mountain on the opposite side of the ridge he disappeared over to set up on in the morning to glass, and my dad went back to where he shot from the night before.

Unexpectedly, at first light, I spotted the bull not far from where he had run over the ridge. He was feeding in some sagebrush. I glassed around for my dad because I knew he would see the bull as soon as he glassed down into the valley from the ridge. After an hour and a half later, I was able to glass my dad up. He had worked his way down the hill while keeping his distance from where the bull had bedded down. It was apparent that he had spotted the bull and was making a stalk. I thought we had him! I put my spotter back on the thicket of trees that the bull was in. Not long after, I saw a flash of tan as the bull trotted out of his thicket of trees and disappeared over the nearest ridge. I painstakingly watched for the next hour while my dad continued his stalk on an animal that was no longer there. The swirling wind had alerted the bull and busted the stalk. Eventually, my dad learned what I had known for a while and made his way down the ridge for me to pick him up. We went back to camp and made our plans for the next morning. I would be at the same vantage point I had been at the day before, and my dad decided to come with me.

As luck would have it, we spotted the bull almost exactly where we had seen him the day before. We still aren’t sure why the bull was so anchored in that one area, but it really worked in our favor. With the way the wind was swirling, we decided that walking up from the bottom of the hillside would be a safer bet than walking down the ridge as he did the day before. I wished him luck as he mounted his four-wheeler to drive down to the bottom of the valley and hike up to try and get a shot at our monster bull. Not long after he left, some fog and snow moved in that was so thick I could hardly see the trees 50 yards in front of me, let alone the hillside that the bull was on. I would have no way of knowing if the bull spooked out of the area or what direction he was headed. My dad was going in blind, but the falling snow meant less carry of his scent.

After sitting blind on the hillside for about two hours, we heard a shot ring out across the valley and I heard the unmistakable sound of a bullet hitting its target. That shot was immediately followed by a second shot. We had no idea what to expect, but my mom and I drove our four- wheeler down to the bottom and found where he had parked. He wasn’t back down to his four-wheeler when we got there, so we decided to head up the hill, occasionally calling out for him. Once we got about halfway up the mountain, we finally got a call back. A few short minutes later, we walked up on him beaming, standing next to the absolute bull-of-a-lifetime. In the snow and fog, he had jumped the bull in the trees and barely got his first shot off before he disappeared again. He said he wasn’t sure how well the first shot hit, but it was enough to stop him in his tracks, so he sent another shot just to be safe.

This was truly the trip and hunt-of-a-lifetime, and all three of us are so thankful for the memorable trophy for my dad and the precious memories made along the way.