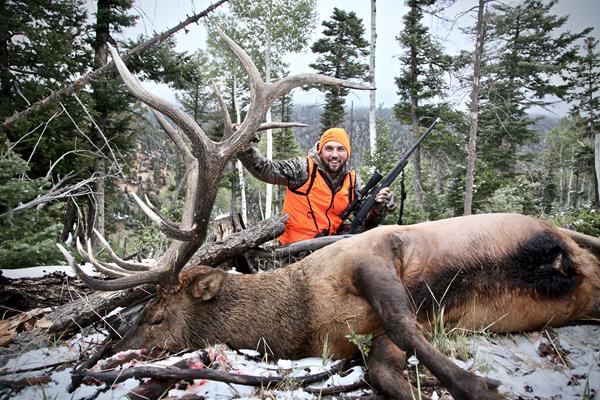 September is my favorite time of year. It is when fall starts in the mountains and bulls start screaming. My partner and I have been very fortunate to be able to hunt some great locations over the years for deer and elk while filming our TV shows, Savage Outdoors and The One. We always try to do at least one elk hunt during the rut once a year, if possible. In 2019, I was fortunate enough to get the opportunity to hunt a private ranch in Colorado that had some exceptional elk hunting. It is not easy to find a property to hunt that has great bulls, especially in an area where you can get a tag. Another option is to work with the landowner to use one of their Ranching for Wildlife tags. I hit the prime of the rut and got to experience some of the best elk hunting I have ever seen. I was able to kill one of my biggest bulls and had the experience-of-a-lifetime. I knew I had to get my partner, Jamie Satterfield, and my dad to come up and hunt with me on this ranch in 2020.

With our crazy schedules and the landowner’s schedule of guests, the only time we could make it work was the first week of the season. It was definitely not a rut hunt in most cases. This was going to be a very different hunt than I had the year before. More than likely, the rut wouldn’t be going wide open yet and we would have to climb high to find these bulls. The area we were hunting had mountains over 13,000 feet in elevation. We were hoping to find them a little lower than that, but we knew more than likely these bulls would be at the top of the mountain.
It was finally here, the first week of September. We arrived in Colorado, and they were calling for snow at the end of the week. There was a chance with this weather that we might actually get to see the elk kick into gear and start to rut a little bit, or with a front coming in like this, it might make the elk just lock down and not move for a day or two. We started the hunt off with two windy, cool but clear days. The bulls were not doing much, so our best plan of action was to get up to a higher elevation and glass as much as we possibly could to try to locate some of these bulls. It didn’t take long before we were able to put our eyes on a great bull. There were just two problems with him. He was about two miles away and he was way above tree line, putting him at about 12,000 feet. It was late in the morning, and we actually watched this bull feed over the top of the mountain and out of sight. After watching him with a few cows, it didn’t seem like he cared much about the cows or rutting. We never saw nor heard him bugle, nor did we hear a bugle anywhere on the mountain that entire day.

After Jamie and I watched that bull the day before, we decided to split up and climb higher in a few different locations to try to locate some new bulls. We both spent the better part of the morning glassing different areas but not having much luck. I decided to go back up to the same lookout location where we had watched the big bull the day before, thinking maybe I would get lucky and be able to find him again. We drove up as high as we could and then hiked over to set up the spotting scope. Jamie was already sitting there watching the same area, hoping he could spot the bull.

We spent about an hour picking that mountain apart and finally spotted a few cows. Then, the bull stepped out. He wasn’t very far from where he was the day before. We looked the bull over pretty good and decided he was a good-sized bull. It would be worth going over and looking at him if we could get up to where he was without spooking other elk. This bull was way above tree line, and when they started feeding, they actually ended up feeding over the top of the mountain again.

When we went back to camp midday, I kept harping to Jamie that the bull was going to feed over that ridge again. He was second guessing it a little bit. These elk move around all the time, but seeing him in the same spot doing the same thing two days in a row this early in the season was rare. I was extremely confident that Jamie had a great chance at this bull if he could get above tree line undetected.

That afternoon, Jamie had a pretty good climb with his cameraman to get above tree line. They got up on the flat the elk had been feeding on at about 3:00 p.m. They were able to set up behind a giant rock that we had used as our reference when we were watching the elk from our lookout position. By the time they got set up and the cameraman was ready, they heard a bugle. As they looked in the direction of the bugle, they could see antler tips moving over the hill. The bull was coming up on the flat where they were sitting. The plan was coming together! With the cooler temps, the bull must have really gotten fired up. He was bugling nonstop and walking right toward Jamie. He ended up coming across the flat about 85 yards from Jamie, and he made a perfect shot on the bull! It doesn’t always happen like that, but when it does, it doesn’t get any better than being able to experience a bull of that size screaming his head off and then taking down such an awesome bull. This was by far Jamie’s biggest elk to date.

Now it was my turn to try to find another bull to go after before the end of the week. The weather continued to get colder and now we had some snow blowing in. We thought we had planned a hunt way before the rut, and it might be hard to find some bulls doing much. We called that wrong. When the snow hit, it did us a huge favor. It shocked the elk for a day or so with the drastic weather change, pushing them down into the timber.

On the last afternoon of our hunt, we went back to the area where our hunt started five days before. We had seen a ton of elk sign on the old logging roads on this ridge but didn’t hear any bulls that day. After this snow, it was a different mountain. They were screaming everywhere. We got lucky and spotted a large group of cows going up the mountain with a decent bull pushing them. We had seen a number of bulls all week the size of this bull, so we didn’t go after this group. There were two bulls still down low that were bugling, and it sounded like they were going to come up the same ridge this group came up. We occasionally cow called to let the bulls know that we were there. They were talking but not moving much. I was starting to think that they might have cows since they were so hung up on the creek below us.

We decided to wait them out instead of going down the ridge to get them. One of the bulls sounded like he was starting to work his way down the creek, not really changing his elevation, but he was on the move. We just kept trying to parallel him, staying above him. We had moved down the ridge about 400 yards using a logging road to stay quiet. The bull seemed like he was coming up to our elevation, so we cow called a few times and he started screaming and coming right up the ridge toward us. We worked to a spot where we could see a little better in the timber where they had cleared for logging and set up. The bull was coming, so I got set up on one knee and looked up. I could see the top of his rack coming up the hill. He read the script and ended up about 75 yards from us. Giant Colorado elk number two was on the ground this week!

When we set the dates for this trip, we were hoping we could get the opportunity to hear some bulls bugling since we knew we were coming early. We knew in this country we might have to get to higher elevation to find the elk above tree line. Instead, we got lucky with the weather and it turned our early season hunt into one of the best elk hunts I have ever been on. We achieved absolute early season success in Colorado!