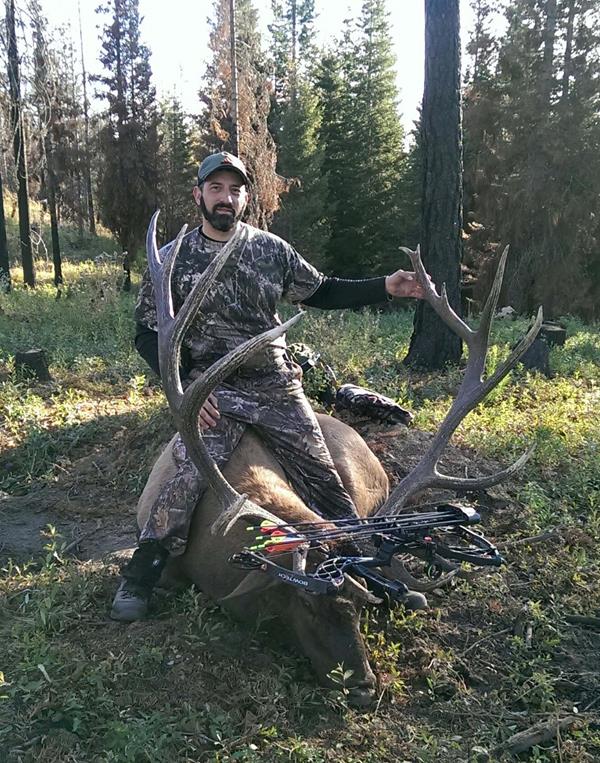 In 2016, I finally drew the coveted Wenaha non-resident archery bull tag. I had 20 points and was finally going. Two years prior, my dad had drawn the same tag with 19 points and had shot a nice, heavy, mature bull on the third day of our unguided father and son wilderness hunt. This was by far the best hunt we had ever been on.

Now it was my turn, and the anticipation and excitement quickly turned into immense pressure. What if I failed? This was a once-in-a-lifetime hunt. The same stresses that I talked with my dad about on his hunt were now hitting me. The unit has had an ever increasing rate of predators, especially wolves that are now well established throughout the unit. An Earth-scorching fire had changed much of the landscape. How much had changed since we were last there? It was difficult to get information on its effects, what timber remained, and the current salvage logging operations.

A more important concern quickly hit home. A few weeks prior to the hunt, my dad told me he had been diagnosed with cancer. He had been hiding the news from me for five months as to not distract or make me worry. On top of that, he was foregoing treatment to go on my hunt as to complete our lifelong quest for two “bucket list” bulls. The thought of losing my mentor and lifelong hunting partner was a weight I was struggling to bare.

The time came for my hunt. I had flown from Phoenix, Arizona to Portland, Oregon. My dad picked me up, and we prepped and packed for the hunt. The seven and a half hour drive from my parents' place to our destination was filled with stories of prior hunts and plans for the one ahead.

September 10th was day one of my hunt. We were counting down the minutes to legal light, listening to bulls screaming across the ridgetops. Within 40 minutes, I was in position and Dad had called in a big 346 class whaletailed 5x6 within 18 yards. I drew but let him walk.

Dad said, “Why didn’t you shoot him? I would have shot him”.

I knew he was a good bull that I may regret, but it was the first day and I didn't want this to be over. By the end of the third day, I had passed on four bulls and had called in 25+, but with the wind not cooperating and the dense forest, I had still not released an arrow at a bull. However, I did stay focused by arrowing a squirrel and a couple grouse. That night, I decided I would shoot that big 5x6 if given another opportunity.

in the morning, we headed in to where we had last seen the big 5x6. Day four was ridiculous. We parked at the trailhead to the wilderness area and could already hear bulls screaming and antlers cracking. Multiple bulls were fighting for dominance and establishing a pecking order for the cows. The ruckus played out for miles, and more and more bulls joined in. Our heads were on swivels trying to figure out which direction to head as bulls were coming from what seemed like everywhere. As daylight approached, I got a glimpse of a large 7-point beam on a hillside and we made our play. As we got closer, it was clear that this was the “big dog.” His unrivaled fury and frustration as he shuttled his cows to safety was quite the spectacle. He was running the ridge back and forth, stopping only to direct cows and take his frustration out on a mature pine. He smashed his head tines deep into the bark as his hooves dug in, permanently scarring the trees with 4” deep grooves. I made my way to a position to intercept him. He pushed a pesky satellite bull out of his herd, driving him over the next hill. Dad cow called, and here he came, but he suddenly changed his route. He was now heading below me towards my crosswind, and I was running out of time. Immediately ranging out in front of him as quickly as I could, a charred aspen was my marker. With my sight adjusted, I was now at full draw, leading him as he charged down the slope on my lower parallel. My dad, seeing me draw my bow from his position below, knew he had to stop the bull. He let out a cow call. Nothing. Then he screamed on his bugle. The bull quickly slowed to respond, and as he paused to bugle with a downward quartering angle, my arrow found its mark, dropping him to the ground.

The bull stumbled to get up. Confused and wobbly legged, he made it about 60 yards and then went down. A satellite bull, seeing him in trouble, immediately took advantage, charging in at him bedded. Then, with the most incredible will of determination, he rose to his feet. He roared with dominance, sending the satellite bull running and then collapsed.

My dad was now at my side. We watched the steam rise off the bull's body in the crisp morning air. I had just killed a large herd bull. As we approached him, there was no ground shrinkage. He now lay before our feet, a nice, wide 8x7 with character. Exceeding all expectations, we were in shock and blessed by another successful hunt together.

We are now two for two on Wenaha wilderness bulls. Each hunt was on foot, unguided, and on our own. Our father and son hunts lasted a combined total of seven days. My bucket list bull is now complete, and I have a 387" green, 380 3/8" official score bull to show for our efforts.