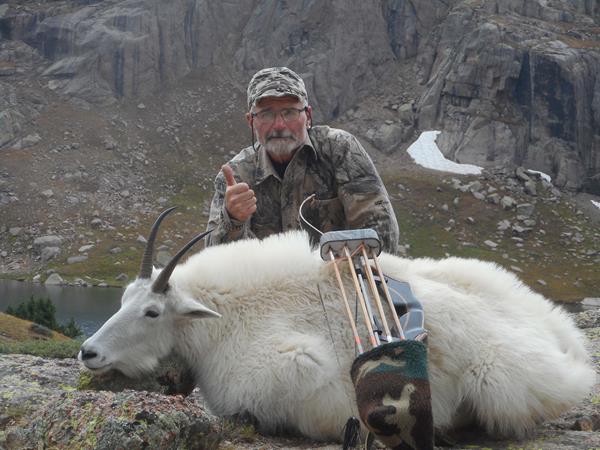 While checking my mail in early June, I received an envelope from Colorado. Knowing it was time to start receiving my annual refunds, I didn’t get too excited. The letter once again revealed that I was unsuccessful in the bighorn sheep draw. In years past, my sheep and mountain goat refunds generally came in the same day or the next. I commented to my wife that this could be a good omen. I never checked the results online, and after about five days, I got another letter from Colorado. When I opened it, I couldn’t believe it! I’d drawn a G5 archery-only tag.

I immediately called my hunting partner, Bill Hedl, whom I travel to Idaho with almost every year to archery hunt for elk. I suddenly had a lot of planning to do. My first thought was to hunt elk September 12-26 and then put Bill on a plane and I would head to Colorado. During a strategy meeting with Bill, he graciously offered to drive to Idaho himself and I’d meet him there after my goat hunt. With the goat opener on September 5th, I told him I’d hunt until the 13th or 14th and then head to Idaho for elk.

I left my home in Massachusetts on September 1st and headed for the mountains of Colorado. I was hoping to be hiking in on September 3rd, and I was, but I was a few hours late. I spent extra time at my vehicle because I was double checking everything. With my late start, I was only able to make it approximately 9 miles that first day, although I was hoping for 12.

My first day didn’t come without some adversities. About seven miles in, the third bridge was out and I had to fjord the river barefoot. After regrouping on the other side of the river, four elk hunters from Ohio came up to the river and promptly put on rubber water shoes. When they got to my side, I commented how nice it would have been to know that the bridge was out as I could’ve been prepared as well. We chatted briefly and then I was on my way again. I decided to put up for the night, and with darkness quickly approaching, I settled on a semi-flat spot.

I set out the next morning with renewed excitement to reach my destination. While hiking along, I went right by the spur trail I needed to take. After a while, I realized something was amiss but I’d already gone one and a half to two miles out of my way. I started bushwhacking backwards. I was losing precious time crawling through blow downs, so I crossed the river and finally found my spur trail. I dumped my gear at a suitable camping spot, and by now it was quite late and I’d had enough for one day.

The next morning, I finished my trek up to goat country, stopping 0.6 miles short of a lake. It was a great spot right next to a creek with shelter under the trees and plenty of firewood, should I need it.

It was hard to contain my excitement the next morning being up in God’s country by myself hunting mountain goats. I put on a lot of miles but didn’t spot goats until about 1:30 that afternoon. There was a group of six that I watched for an hour or so, but they were above me on a fairly open slope and not stalkable. While trying to get closer, I spotted another group of six that eventually joined the first group. I left them late in the afternoon, thinking that I’d come in from the top in the morning. On my way down to camp, I spotted a lone goat by the lake. It appeared to be a billy, but he gave me the slip in the broken terrain before I could be sure.

I returned to the lake in the morning, and after a lot of glassing, I spotted a lone goat up in the ledges across the lake. After observing him for a while, he seemed to be content in his second bed. I picked out some landmarks and went around the lake to come in above him. I was on the other side, just beginning to gain elevation, when I turned around to see six goats where I’d just come from. While I was watching, a seventh goat joined them. Now I had a dilemma; was the seventh goat the one I was stalking? After a lot of deliberation, I decided to go back around the lake and try to sneak up on them or set up an ambush if they continued to feed in that direction.

Once I was back around the lake, I spotted a ledge that had a shelf on it with some sub-alpine spruce growing on it to use for cover. This was only my second day and I didn’t want to rush things, so I kept glassing the goats, catching glimpses of them moving in and out of the brush. I had a good crosswind and I was glassing a possible route for a stalk, but I figured I’d sit tight and let things play out as it was still early in the day.

All at once, a kid came busting out of the brush about 250 yards out, heading my way, and about 50 yards behind it came a mature goat. In no time, the kid was right under my ledge, but the other goat hung up about 60 yards out. I lost track of the kid while concentrating on the other goat and was soon startled by rocks rolling and the sound of hoof beats. I turned to see a flash of white cross the shelf I was on about 12-15 yards in back of me. Unbeknownst to me, there was a chute in the ledge and he came right by me. Now I knew that if the other goat followed I had a chance. After deciding that everything was okay, the other goat committed at a pretty fast pace. When she passed under my ledge and went out of my sight, I turned around, put pressure on my strings, and prayed that she’d follow the other goat’s route. I heard hoof beats coming up the chute, and I knew that I’d only have a split second to shoot. As soon as I saw her hit the small opening, I drew, anchored, and released in one fluid motion. She caught the movement, but it was too late. There was instant blood as she reversed direction and went back down the chute, out of sight. I scurried across the shelf to try to catch sight of her and saw her just as she went over a hill and didn’t come back into sight. I climbed higher until I could see her, and after glassing for a few minutes, there was no movement. She’d gone less than 100 yards.

I slowly made my way down to the goat with an arrow nocked, but there was no need. I gave thanks for this great moment and took in all the beauty of the surrounding peaks. Right in the middle of boning my goat out, a nasty snow squall came through. I made it back to camp right at dark, just in time to get the meat hung for a good night of cooling.

I packed my goat out the next day to get it processed, and after nine hours of steady hiking with all the meat, hide, and skull on my back, I finally arrived at my truck. It was too late to get my goat checked in at the Fish & Wildlife headquarters in Durango, so I iced the meat and got a motel room.

Colorado Fish & Wildlife wasn’t open on Saturday, so I took the meat to get processed and then went back to the trailhead camping area to cape out the skull. I put it in the cooler and got a good night’s sleep in the back of my truck.

I’d like to thank my wife, Pat, for putting up with this obsession of mine, and thanks also to the references supplied by Huntin’ Fool for all their help.