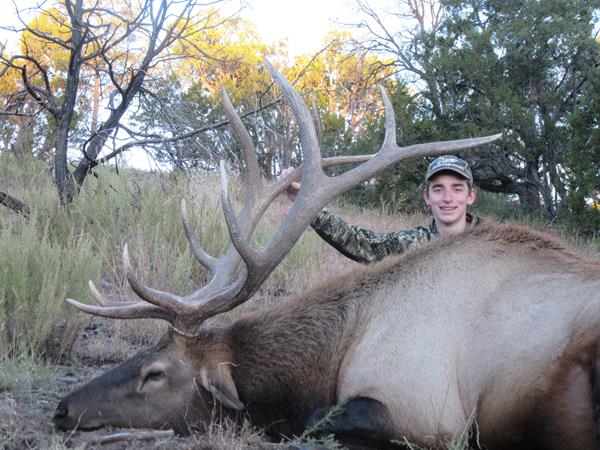 My son, Paden, is living a charmed life! Last year, he harvested a great 183" buck in Colorado, and this year, he drew a New Mexico youth muzzleloader bull elk tag. I’m not sure what the exact odds were, but there was only one youth tag available in the non-guided pool for the unit and he drew it. We looked forward to this hunt all year and got to the point of vivid dreams about it at night. Our good friend and Huntin’ Fool member Phillip Peine had hunted the unit before and graciously offered his time, knowledge, and muzzleloader for the hunt. Amazingly, his daughter drew the same tag last year and harvested a great bull. Phillip suggested we travel to New Mexico two days before the season opener to scout. Wanting to minimize missed days of school, we had Paden fly to Albuquerque Friday night before opening day on Saturday, October 7th.

I left work midday on Wednesday, October 4th, and made the 11-hour drive to Albuquerque. Phillip few from Las Vegas, and I picked him up at about midnight at the Albuquerque airport. He had been up since 4:00 that morning hunting deer in Utah with his muzzleloader before catching the evening fight in Vegas. We got to the first scouting area at 3:00 a.m. There was a chance of rain, but we were too tired to put up a tent, so I rolled out a tarp under my truck. We tucked into our sleeping bags on the tarp right there underneath the truck and slept until 5:00 a.m.

Our morning hike and glassing session turned up no elk, so we drove to another area, catching lunch at a gas station. We arrived at the next area at about the same time as a heavy thunderstorm, so we both passed out in the truck, overcome with fatigue, and slept the rain away. I was startled awake by a very unusual sucking sound near the truck. A beef cow was slurping water from a puddle outside my window. We had a good laugh at that.

That afternoon and evening proved much more fruitful. We took the ATV up some roads and stopped to blow bugles, and we got answers. The bulls were vocal but hidden in thick, unglassable timber and steep draws. Just before dark, we spotted our first elk, a cow, but she was in close proximity to a very vocal bull. Pretty soon, he had competition, and we could tell the bulls were moving toward each other. There were two or three other bulls bugling around as well. We never saw the bulls, but we were very excited to have located rut-crazed elk. Phillip had one more area to check out for the morning, so we quietly backed out and left after dark. In the headlights by the road, we came across two small herds of elk, each with a bull. There was a decent 5x5 and also a small 6-point. That night, we set up camp and a tent in another area. All night, we were roused by bugling bulls not far off. My excitement continued to build. Between that and the bugling bulls, I didn’t sleep much. Phillip was battling a cold and slept fairly well with cold meds.

First light on Friday found us on the ATV again. We came through a creek bed with water and immediately jumped a herd of cow elk between the water and the road. We stopped to look and heard a bugle just up ahead. We moved forward and caught a strong whiff of rutting elk. Suddenly, a bull materialized and crossed the road not 20 yards in front of us. He was beautiful, a solid 350 class 6x6 with great mass. He stopped at 40 yards and stared at us. I was wishing it was opening morning and Paden was there. Little did I know that we would have similar luck the next day. The rest of the morning was awesome! Bulls were bugling like crazy, non-stop until about 11:30 a.m. We saw a few decent bulls and a really nice 7x7.

That afternoon, we turned up a few more elk and another 5x5. I’m convinced Phillip is a bull magnet. I’ve hunted elk with him before, and he always manages to find the bulls. He can spot them like no other. Back at camp, the wind had blown our tent over as I had forgotten to anchor it with stakes. One section of fiberglass pole was broken, so we improvised a fix with electrical tape. That night, I drove to Albuquerque to get Paden and Phillip stayed in the tent, nursing his cold.

I picked Paden up close to midnight and then drove the two hours back to camp. He was unconscious the whole drive. We got about three hours of “sleep” before waking up at 5:00 a.m. Breakfast was oatmeal and some hot chocolate warmed over a can of Sterno. I was a bit worried because we didn’t hear any bugling like the night before. We started driving with the windows down, stopping to listen. No bugles. We motored past the water where we had seen the bull and cows the day before but saw nothing. Just after it was light enough to shoot, a big bull appeared 20 yards of the road.

Phillip looked over, thinking I was referring to something 100-200 yards out. He wasn’t expecting to see one so close. He said his vision suddenly refocused close and he thought, Oh, that bull! We all stared at each other in shock for a few seconds. The bull then turned his head to leave and we got a great profile view. Phillip and I shared the Oh-yeah he’s-a-shooter expression while nodding our heads. Paden had been half asleep, but he was wide awake now. The truck doors exploded open, and I shakily helped Paden cap the muzzleloader. We could hear the bull crashing through the brush below us. We crept down the hill, scanning for a glimpse. Paden spotted the bull climbing the other side of the ravine. It crossed the road exactly where the bull had the previous morning. As Phillip set Paden up on the shooting sticks, the bull stopped, mostly broadside at 200 yards and very unconcerned with our presence. Paden hadn’t been in New Mexico much more than seven hours, and it was within the first 10 minutes of shooting light that he squeezed of his shot and put the 290 grain slug through the pump house. By then, buck fever had a hold of us all, making it difficult to reload. Paden readied for a follow-up shot, but that didn’t matter. The bull only went about 10 yards, lay down, and was done. He died just 50 yards from the road.

In my many years of hunting, I had never brought home my own bull, but watching Paden have such success was way more exciting. Many thanks to Phillip for sharing his time and talents and helping us have a very successful hunt. Also, thanks to Huntin’ Fool for the information on New Mexico hunts, and thanks to my very patient wife.