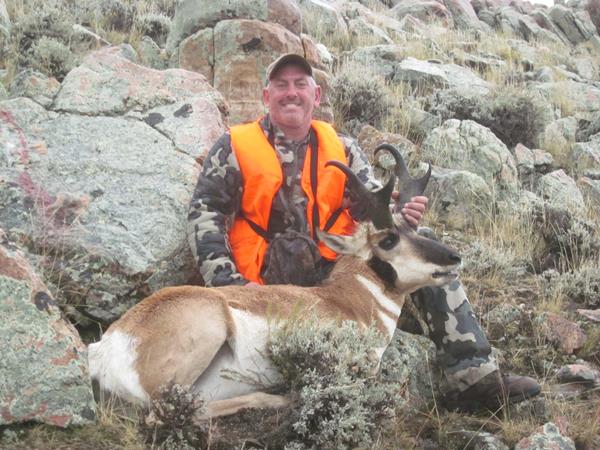 "Caution, antelope entering highway at 55 mph!" I knew I was getting close after seeing that. After a day and a half of driving, I had reached the high plateaus of Wyoming to meet my good friend, Mike Curtis. After nine years, we decided to pick unit 68 for antelope. After talking to Logan at Huntin' Fool and doing research, we knew we would have a challenge getting an above average antelope pretty much anywhere in Wyoming, so 80” was the magic number we were going to try to get for our scores. Seeing that we were at 6,500 feet, we were already in the clouds and the snow and the rain! Between snow showers on the first day, we found a camping spot and set up and started scouting.

We were told to look in the mountains to the south for bigger bucks and also to the north of the unit. We spent a total of three long, fun days scouting on four-wheelers and 4x4ing. Big mountains and thick trees are what we experienced to the south, and little to no antelope were seen. When we started looking to the middle of the unit, we saw thousands of antelope. We quickly realized that almost every antelope we saw was mid 60s to maybe 70". That was not enough to get us excited. As we worked our way north, we started seeing antelope that got us excited. Pretty soon we had our top four. We were very confident that these antelope would score in the high 70s. These were by far the biggest we had seen. We had the "Mass Buck," "Basin Buck," "Cabin Buck," and "Wide Buck." Mike and I talked and we both wanted different bucks and neither one of us cared who went first. I decided to go after the Wide Buck because of how much spread it had and its unique look. I was torn between this one and the Mass Buck. Initially, the Wide Buck was in an excellent spot and stalk area. When we decided to hunt it, it was across a canyon in a different area but it was still OK to spot and stalk.

We took the four-wheelers down, across, and up the other side and parked about a mile away. When we got to the area after sneaking up there, we ended up exactly right in the middle of them. We had antelope all around us. Unfortunately, after looking and looking, we discovered that the Wide Buck had outsmarted us and ran a long ways away from us and left the others behind. We waited for a while, and he ended up hooking up with another group, so we left. I was a little bummed, but it was a fun way to start out. Due to our location in the middle of nowhere, I decided to go after the Mass Buck because it was close. Mike’s bucks were all close to our camp hours away.

The Mass Buck was initially next to a dirt road in another spot and stalk area. When we got to the area, he wasn’t there. We got in and out of the vehicle three different times, looking for him but not finding him or any other antelope for that matter. For the third time, we decided to walk a little further and check out a bowl. As we were walking up a saddle, looking up and to the right at a cool rock formation, the Mass Buck stood up about 50 yards away. He was bedded down in the wide open to the left, and neither one of us saw him. He took off, running way too fast and down into the bowl. After I had a major meltdown and started heading back (now 0-2), my good friend and voice of reason said we were not done yet. He wasn’t giving up and wanted go back to the truck and drive down a little further to the other side of this rock formation and check out the bowl to see if we could see him. Thank God for good friends!

As we headed up toward this rock mountain from the opposite side, I was going slow and glassing the bowl and looking up to the left. I had a giant boulder I was using as cover. As we were slowly walking up and getting to the edge of the boulder, I looked all the way up to the left and low and behold that antelope was standing in the rocks almost at the top with about five more does, looking right at us. I told Mike he was right there, so he said to take his spotting scope and use it as a stand. I did that, and he ranged for me. “92 yar...,” he had started to say when I shot. He didn’t finish. The antelope was ready to run again, and I wasn’t waiting. I dropped the Mass Buck in his tracks! My emotions went from disappointment to being ecstatic. The buck was bigger than we had thought and I was so happy with it, especially having my friend there. It ended up scoring right at 80”.

The next day was Mike’s turn. Mike had his heart set on either the Cabin Buck or the Basin Buck. Mike’s bucks were very unique with what we were seeing. Unlike the Mass Buck that just had everything big, Mike’s bucks had unusually large hooks compared with the rest. We got up the next morning and went after the Cabin Buck. At 6,500 feet, the clouds that day decided to be right at ground level. After driving around, waiting, and looking for other vantage points, we decided to go after the Basin Buck. We drove up a ways and then hiked in about a mile. The clouds were dropping right into that hidden basin. As we arrived, a cloud had just started to blanket the area and I thought I had seen a group of antelope at about 300 yards. Mike thought he’d seen a single one off to the right. As the cloud came down, I told Mike this would be a great time to crawl up to the edge of the lip, set up, and wait. Perfect timing! We were set up and waiting with me behind Mike, glassing and ranging. The cloud started lifting, and we immediately saw a buck off to our right by itself. We glassed, and Mike said he liked that one and was going to shoot him. I told him to wait a second to be sure. He wanted to shoot, but I said no. After some discussion, we realized it wasn’t his buck. I said I was pretty sure there was a group right in front of us so he should just wait. After a couple of minutes, the clouds started parting. Sure enough, there was a group of about 30 antelope at 300 yards. After waiting for a clear shot and ranging for him, Mike shot and nailed the buck. He stumbled, so Mike hit him again and then we waited. The Basin Buck dropped. What a great hunt! Mike's buck scored 78”.

We had two great hunts and a great trip in beautiful Wyoming. Both of us were ecstatic with our bucks, they scored great, and both of us got to share in the hunt. After talking to some outfitters and others, we realized how awesome we did with our buck scores. Much like hunting with our own sons, we both said how awesome it was to be a part of the hunt, not pulling the trigger, but being able to help out our friends and share in something special.