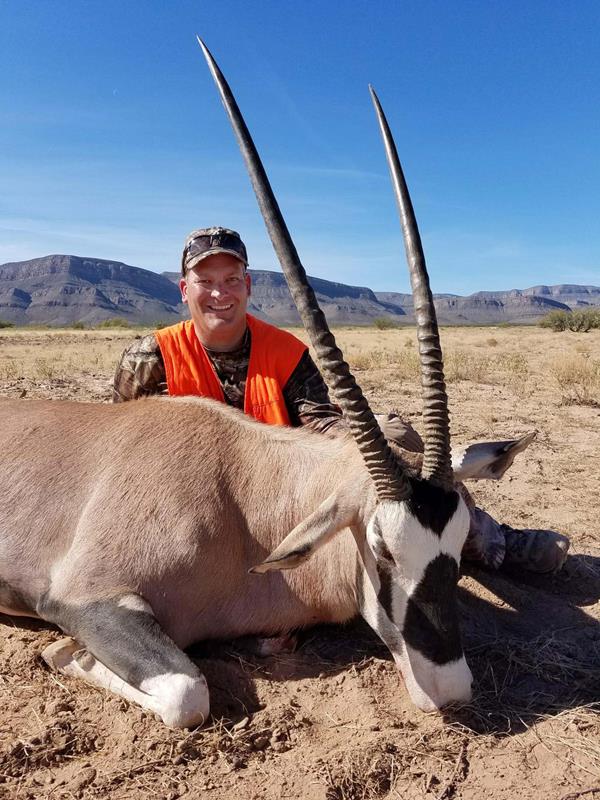 For 12 years, I have been building points in many western states in anticipation of one of the amazing hunts I read about every month in the Huntin’ Fool magazine. I appreciate the unbiased advice their Hunt Advisors give as to what areas to apply in.

2017 was shaping up to be a great year as I was lucky enough to draw both a mule deer tag in unit G of Wyoming and a New Mexico oryx tag on the WSMR (White Sands Missile Range). My Wyoming mulie hunt consisted of five days of some of the worst weather Wyoming had ever had in mid-September. Needless to say, my coveted unit G tag remained in my pocket as our quest for one of the unit’s many 200” bucks ended abruptly. With that in mind, I looked at the forecast for my upcoming oryx hunt and was excited to see that 60 degree temperatures were expected.

I’ve had a great relationship with Compass West Outfitters in New Mexico over the years. Chris goes out of his way to help find areas with true trophy potential. While I was lucky enough to draw an oryx tag on my fourth year of applying, my guide, Jim, has applied unsuccessfully for over three decades! The WSMR tag is a once-in-a-lifetime tag with low draw odds and is only a three-day hunt. As such, Jim and I decided we were going to try and find a true trophy.

We arrived at the base on Friday at 5 a.m. so that we were in front of the line. After orientation, it was off to the races as hunters scrambled to their vehicles to be first to their favorite spots. I’m from a small town in Illinois where if you find 80 acres of undisturbed land to hunt on alone, you have really accomplished something, so it was hard for me to fathom why everyone was jockeying for a position to hunt when there were less than 70 hunters with their pick of more than 700 square miles to hunt. Jim’s strategy was to find a high point to glass from. A quality spotting scope and rangefinder are critical for a hunt like this as most shots average 300-500 yards. This is due to the tremendous eyesight of oryx and the fact that the terrain is fairly open. I was glad I had tapped the "slush fund" and invested in a set of Swarovski 12x binoculars before I left. I expect that my wife will be equally thrilled about the new addition to our family when she reads this.

After scouting several areas, Jim located a group of five nice animals and our first stalk was on. We were only able to get within about 550 yards due to the open terrain. One of the bulls was massive, around 40” with very heavy bases, and would have been a beautiful trophy. However, he had several inches broken off of one side. Since it was the first day, we chose to back out and see what else we could find.

Saturday and Sunday started with us doing a lot of glassing in different areas. Jim located many nice animals and we had several shot opportunities, but we still hadn’t found what we were after. Throughout the hunt, I consistently joked with Jim about wanting to know when he was taking me to his "honey gole". Well, we found it on the last morning of the hunt. Throughout the hunt, we gravitated towards a large area that was not accessible from any road. We would consistently see oryx grazing in the fields, but due to the lay of the land, it was very difficult to approach them without being spotted. Oryx have amazing eyesight, and when their tails start to swish, your time is limited before they disappear into the thick brush.

Jim suggested we load up our packs and get off the beaten path, approaching the area from the opposite side. We spent the next two hours hiking through the brush and drainages to try to get a better look at the honey hole. It was one of those "Are we there yet?" hikes where we would crest a ridge only to peak over and find that we had another mile to go. As we got closer, we started seeing massive amounts of tracks and sign. It was evident that we had found the main bedding area, an area where the oryx fled to for safety that was not visible from the road. It was almost too good to be true. As we rounded every corner, we spotted more and more oryx and had our pick of several great bulls. It was 11 a.m. and the gate closed at 6 p.m., but we were square in the middle of oryx paradise. Yes, the honey hole!

As we worked our way through the brush, we spotted a great bull and decided to try and get a closer look, even though he had already spotted us. As luck would have it, there was one bush in front of us that we were able to use for cover. We made a quick advance to get within 300 yards. As I got ready for the shot, Jim confirmed that he was definitely a shooter. I steadied the .300 Win Mag for the shot just as the bull started to run. My shot was a little further back than I would have liked as the vitals on an oryx are further forward than most big game animals we encounter in the U.S. Fortunately, he only went 40 yards before bedding down. We were able to finish the bull without having to track him. Now that we had our once-in-a-lifetime trophy, we celebrated and snapped a few photos. Then reality set in. We only had six hours to spare before the gate closed, and we were several miles from our vehicle. It was a race to get him field dressed, in the truck, and to the gate before 6 p.m. We saw over 80 oryx in the time that we spent coming in and out of the area with our trophy, which was more than we saw combined over the entire hunt.

We knew we had a nice bull, but we weren’t sure exactly how big he was until we got to the gate. Gilbert, the biologist who runs the hunts (and who does an excellent job providing hunters with a wealth of knowledge through many emails in the months leading up to the hunt), got excited when he saw our bull. After measuring it, Gilbert confirmed his longest side was 39", making him the largest bull killed on the hunt and a top 30 bull of all time! Needless to say, I was thrilled that my once-in-a-lifetime tag had been filled with such a beautiful animal.

A special thanks to Jim and Chris from Compass West for finding the honey hole and helping to make the trip a huge success and one that I will never forget!