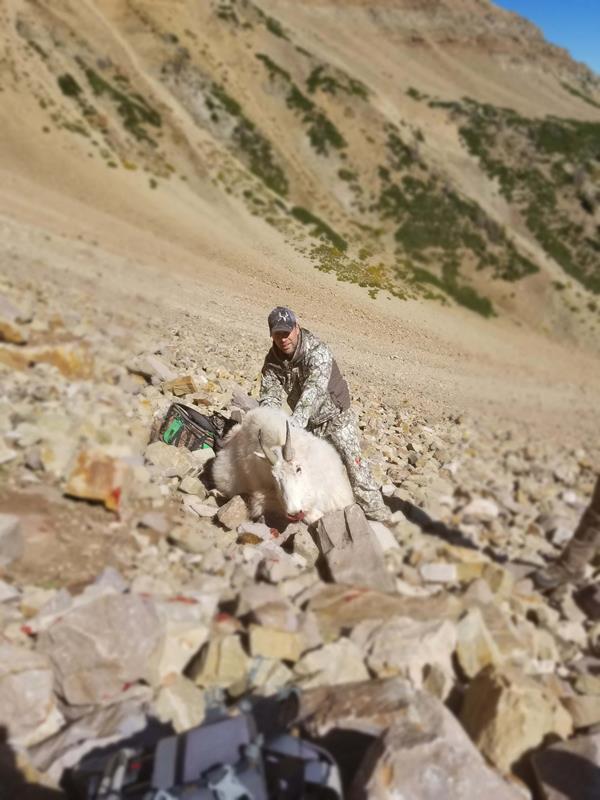 It was May, and I was sitting at our cabin in Montana after bear hunting that morning. The phone rang, and it was my mom letting us know that not only had she drawn a Rocky Mountain bighorn sheep tag, but my brother-in-law had drawn a Wasatch moose tag as well. My mom had been putting in for 21 years and was well deserving of the tag. We were superstitious about checking credit cards in the past since it had usually been bad luck, but with the day’s good news, I decided to throw caution to the wind and looked up mine. What would be the odds that I would draw a mountain goat tag as well with 8 points? Turns out the odds were in my favor because my card had been hit for the appropriate amount.

I started scouting my unit in July and went on multiple hikes with my sister, Candise. I reached out to my buddy, Johnny, and we took his horses on a 25-mile adventure on an extremely wet and foggy day. We were only able to locate one billy goat when the clouds cleared. He was a mile up in the cliffs, working his way around the rim and out of sight.

After several more scouting trips, I made the decision to start my hunt back in the area where Johnny and I had ridden several weeks prior since I had some good intel from previous successful billy goat hunters in years past. My buddy, Chase, offered to take his mules, and we started the trek late in the afternoon. As the sun was setting, we stopped riding and put camp up where Johnny and I had spotted the lone goat several weeks prior. It was just before dark, so we did some quick glassing and were able to spot two goats, which we named “Bill” and “Ted.” We believed Bill to be a shooter, but he would need a closer look.

The next morning, we had a game plan and hiked way up into the ledges and sat waiting for Bill and Ted to show, but they never did. That afternoon, we watched a goat work his way through the cliffs and into the bowl across the canyon from us. He lay behind a rock where we could size him up, and we determined he was a great, respectable billy, but we needed to minimize the distance for a shot. We called him “Lucifer” since he was the mighty tempter making us move into a more dangerous spot for a better shot. As we closed the gap, he spotted us and quickly moved back out the same direction he arrived. We spent another day riding all over the country and not seeing anything comparable to Bill or Lucifer.

On the next trip, I decided to hunt the southern end of my unit where I had previously seen goats on a scouting trip. My dad spotted a nice billy that we decided to make a play on, but he gave us the slip and we went home empty-handed.

By this time, I was feeling exhausted and overwhelmed. I needed to hike back in 10 miles where Johnny and Chase had taken me on horses and mules. I was able to get a few recruits in my buddy, Ryan, his sons, Shane and Colby, and my sister, Candise.

On the morning of September 22nd, we left the house at 1 a.m. in order to make the three-hour drive to the trailhead and give us enough time to get where we needed to be in the morning. Once we made it up into the bowl, we spotted a billy lying down way up in the ledges. We decided to leave the current spot to see what was in the adjacent bowl and located another billy, which we determined to be much smaller. We decided to make a game plan to go after the one still lying in the ledges. As soon as we started moving his direction, he got up and began moving quickly into the area where we were headed. He was headed out and taking the same escape route I’d seen him do twice before. Lucifer? Ryan and his boys ran up this steep, boulder-filled rim to where it leveled off. I did my best, clawing and pulling myself up until I reached the top. I pulled out my rangefinder and determined he was 750 yards. I did my best to steady myself and my breathing but shot over him. I continued to shoot and miss. Shayne took the rangefinder and told me 650 yards as he was working through the cliffs. I dialed my scope into the correct yardage and pulled the trigger. This shot connected and ultimately did Lucifer in. The feeling of relief, excitement, and exhaustion was overwhelming.

My brother-in-law, Andrew, hunted from sunup to sundown with my dad for the first 10 days of his moose hunt without locating a big bull. It was one of those years where not many hunters with that tag were seeing much of anything that merited getting excited over. My dad decided to give it a rest and headed to the cabin for a week or so with the intent to come back and hit it hard. Andrew continued hunting, and on October 2nd, he received a text with a picture from his mom saying, “I’m not sure what a big bull is, but this one looks pretty good to me.” She had decided to go for a random hike and ran into a fantastic Bullwinkle. Andrew was able to get into the area, locate the bull, and end his hunt. It reminds me of when I had a moose tag in Wyoming back in 1996. My Grandpa Ashton, Dad, and I were on our second trip and about our tenth day of hunting. I was frustrated and starting to wonder if I would even get one. My dad noticed I was hanging my head low and told me to cheer up as it could happen around the next bend. Not 10 minutes later, around the next bend, we ran into my bull. It’s funny how things work out and can end so quickly. That hunt remains one of the fond memories I have of my grandpa.
When my mom drew out for bighorn sheep, my first thought was, “How many people get to hunt bighorn sheep in their lifetime?” I knew this would be an amazing experience. My mom had knee surgery in the summer. It was supposed to be just a scope, but when the doctor was in surgery, he found out she needed her ACL ligament replaced as well. My dad asked the doctor if she would be ready to go in November for her sheep hunt, and he responded yes.

As November drew closer, my mom’s knee was still a concern. We knew we would need to locate the sheep and get her on it as best we could. She wouldn’t be able to make multiple hikes scouting and looking for a good ram. We would need some Divine Intervention. I started looking above my house where I located a decent ram way up high, which would require some weather to drive them down in order for him to become an option.

On November 2nd, we spent the morning combing the Wasatch Front and ended up locating some sheep at the top of Nebo, which would take a hiker in good shape all day to get close enough for a shot. That evening, I was talking with my wife and suggested going for a ride to see if we could catch the sheep above the house coming down to water. She said we should call our cousins in the same neighborhood to go with us. We all piled in the truck, and I dropped off the hill, not really expecting anything to happen. Instead of going the direction I had intended on, I had a feeling (maybe from Grandpa) to ride up the canyon for a minute to see what we could see. This was the Divine Intervention we needed because no sooner had we started up the canyon than my wife noticed one up on the hillside. As soon as I laid eyes on him, I knew he was “the ram.” I called my dad and told him I had one spotted.

We were able to get my mom up the mountainside and in position for a good shot, which she made with one squeeze of the trigger from my deceased Grandpa Ashton’s trusty ol’ .270. With daylight slipping away, my cousin, Kirk, and I hustled up the steep incline and located the expired ram. When I got my first close-up of him, I was in awe of his mass. He was magnificent! I was so happy for my mom, her 21-year dream had come true.