The Year of the Deer 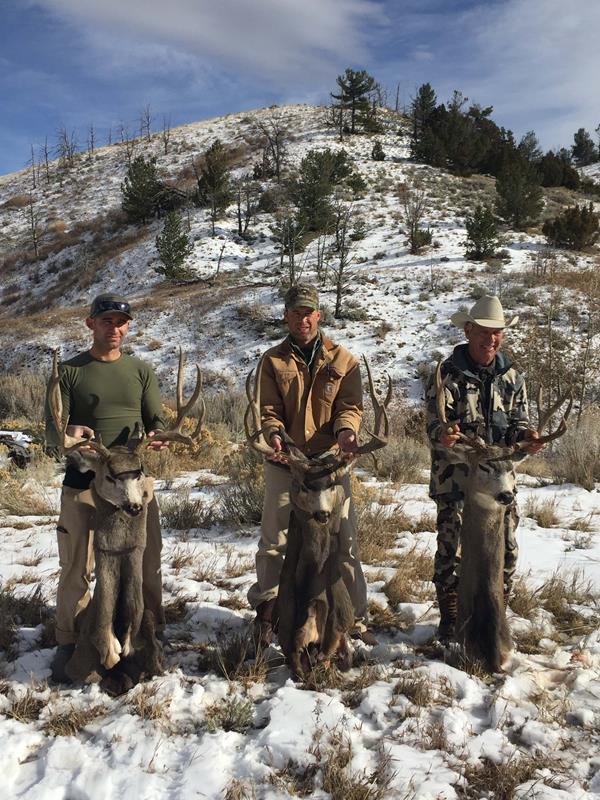 This would be the year of the deer. It started off with my two sons and me drawing late season deer tags in Wyoming. Then, after 23 years of applying in Arizona, I finally drew the Arizona Strip tag. It was a great feeling knowing that I would be hunting with my two sons, both of whom are in the military. It has always been hard for the three of us to hunt anywhere together because of their military obligation.

We all know the Arizona Strip tag is one of the most sought- after deer tags in North America. Several years ago, I hunted with Matt Schimberg for elk in Arizona and had a great hunt, so when I drew the Strip tag, I booked my hunt with the A3 Team of Matt Schimberg, Jay Lopeman, and Chad Rhoton. My guide was Jay Lopeman. I couldn’t have imagined how invaluable Jay would be for me on this hunt.

The story begins with a problem. We wanted to hunt the last part of the Wyoming season since the deer would be in full rut, but I realized that hunt would run into several days of the Strip hunt, so that was not an option. My sons and I decided to move the Wyoming hunt to the first part of the season, even though it would be taking us out of the main rut. I was grateful to my sons for that.

On the first leg of the two adventures, I drove to Wichita Falls, Texas to meet Paul, my oldest son, who is in the Air Force. The second day, we traveled across Texas and then through New Mexico and Colorado. It wasn’t long after entering Colorado that the weather changed dramatically. An early major winter storm was upon us. The temperature was falling rapidly, the snow began to fall, and the road visibility was very poor. Taking our time, we finally made it to Cheyenne that night. The next day, we drove to Cody to pick up my younger son, Nathan, who was flying in for the hunt from Ohio. He is in the U.S. Marine Corps. It was great that we could finally be together for this hunt!

The day before our hunt, the three of us drove to our hunting area where we met our guides Brandon O’Brien and Karsten Milek, who both did a great job guiding on our hunt. Opening morning was clear and cold with snow on the ground. Thanks to the early winter storm, the rut had started. Paul and Nathan were hunting with Brandon, and by early afternoon, Nathan was able to harvest a beautiful heavy-horned buck. Later that evening, Paul took a really nice buck with a drop on one side. What a first day of hunting! Harvesting two bucks like that, I had two happy sons.

The next morning, Karsten and I got on two nice bucks, and I was able to take the larger of the two. Within less than two days, our hunt was over. We all had a great time. Even though it was a short hunt, it was a hunt we will never forget. The following day, we dropped Nathan off at the airport in Cody, and Paul and I headed back to Texas. Because of the short hunt in Wyoming and if everything went right, it was possible to make the Strip opener, but the timing would be tight.

Later that day as we were driving, I received a phone call from home informing me that my Godmother had passed away. The funeral was to be the next week, right in the middle of the Strip hunt. My thoughts began to run together with sadness and anticipation of what to do. The best option was to hunt for two and a half days, fly home for the funeral, and then return for the last four days of the season.

The trip home from Wyoming went well. Now I was confronted with having less than 24 hours to unpack, repack, and be on the plane by 5:00 a.m. to fly to Las Vegas and then drive to St. George, Utah where Jay would meet me. By that afternoon, Jay and I were headed to the Strip. Jay was glad that I had made it for opening day because he had located a very big buck that we would be hunting.

Opening morning found us in the area where Jay had previously seen the buck we were after. Over the last several weeks, this buck had been travelling with three other bucks. As we waited for daylight, a number of vehicles passed us by. I knew then that we weren’t the only ones hunting this buck.

On the morning of the third day of the hunt, I spotted a good buck that was chasing three does. I had to make a quick shot as he was moving fast. I took a shot and then saw him move into the thick brush. I missed at around 300 yards. Later, as Jay and I drove back to camp, I explained to him that because of the time factor of the two hunts I had not been able to shoot my rifle. It was time for me to leave for the funeral. He said to leave him a box of shells and he would shoot my rifle while I was attending the funeral.

After the funeral, on November 13th, I caught a flight back to Las Vegas. It was my birthday, and I couldn’t ask for a better gift than to spend the last four days of the season on the Strip. Jay informed me that my rifle was shooting off and that he was able to zero it back in. The next morning found us looking at a plateau at daybreak. It did not take long for Jay to locate four does at the base of the plateau. He said that there had to be a buck with them, and sure enough, within several minutes, a buck appeared. The buck had a very wide spread. He definitely was a mature buck, but he was a long way off. The deer were heading toward water, and Jay knew where the water was, so we tried to head them off, but they saw us and took off. I figured they were gone for good, but Jay located them again. We made another stalk, but they vanished again. This happened several times during the day, and when Jay finally located them for the last time, the deer were laying down. The buck was lying under a cedar tree with his does close to him. Jay helped me set up for the very long shot. Jay had ranged the buck at 554 yards. I dialed my scope in at 550 yards. After about 30 minutes, the does got up, and I told Jay it was showtime.

The buck got up and stretched. As he came out of the stretch, I squeezed the trigger of my old Sako 7 mm. The shot was perfect, right where I had aimed. He took a few steps and went down. I couldn’t believe it! I sat in silence for a while. After 23 years of applying and making a shot like that, I was able to take the buck-of-my-lifetime.
All the circumstances came together to yield hunts-of-a- lifetime. God had taken someone special from my life, my Godmother, but he also brought someone special into my life. That someone special was Jay. He was always there for me from the beginning – helping with my family situation, sighting in my rifle, locating my buck several times during the day, helping me set up for the long shot, and then finally making it happen. Jay, you are the man. I cannot thank you enough, my friend!