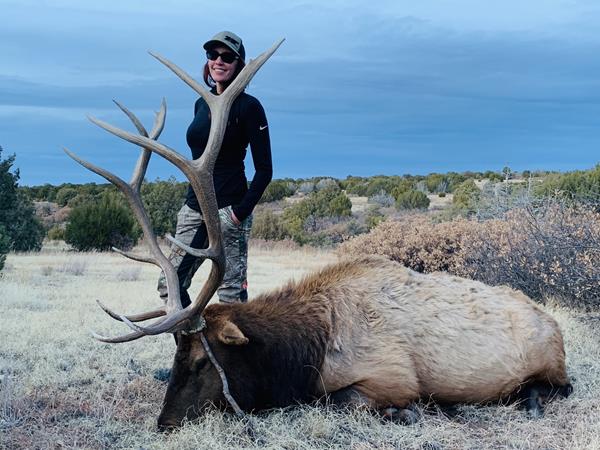 For Christmas, my boyfriend, Matt Adams, surprised me with a five-day elk hunt. The day before my hunt was scheduled to start, we got up before sunrise and set out to scout around. First thing that morning, a beautiful beast stepped out. The sun was rising in the sky, and his cape was glowing and his antlers were like diamonds, reflecting the light whenever he would turn his head. We couldn’t have missed him if we tried. He was just walking around, showing off and enjoying the morning sunshine. We sat on top of the mountain in a field of grass for hours, just watching him and taking it all in. Finally, he decided he would stop teasing us and walked over the edge of the cliff to find his bedding spot for the day and we headed back to camp.

The goal was to go get this dude come first light. Well, you know how it goes, life is never that easy and nothing ever goes as planned. At sunup, we headed up the mountain and started glassing for “Thumper,” but he was nowhere to be found. On day one, we came across a herd of 15 bull elk, but I passed. It’s a little challenging to not get trigger happy, but if you shoot just to shoot, you can’t get the one you really want.

Day after day, we would get up before sunrise and make our way up the mountain. We saw herds of elk every single day, 5 or 6 here, another 10 there, some bedded off the cliff over here. They were all very respectable animals but not Thumper.

For five days, we looked off every cliff, hiked up and down mountains, sat on the highest points glassing for hours, and searched numerous draws. We pounded the dirt, looking everywhere and anywhere we could think of, but nothing. We found no trace of him. He had put on a beautiful show for us and then disappeared. I could have settled and harvested a different bull elk, but I had my mind made up and I wanted Thumper.

Time was not on our side. On the last day, in the last hour with very little daylight left, what to my wondering eyes should appear but ivory tips shimmering along the bottom of the draw while a bull elk was browsing there. Once we saw his tops, we knew it was him. Thumper had made his presence known again. Matt, his brother, Tanner, and I all just looked at each other. It was go time! We grabbed what we needed out of the truck and took off after the prize. Luckily, the wind was blowing about 30 mph in our favor, giving us the perfect opportunity to make a play. It was a slow stop and go process, with every single second of daylight counting against us. If we jumped him at all, it was over.

We were able to sneak up and get right across from him on the other side of the draw. The problem was that he had two younger bulls with him. One spotted us, so we crouched down and froze. We stalled out as long as we needed, giving the young bull a chance to calm down and keep on moving.

In the meantime, Thumper decided to lay down broadside and chew his cud. I was able to get lined up with the perfect shot at about 160 yards away. I sat in the grass and got him in the crosshairs. I took some deep breaths, calmed my racing heart, and pulled the trigger. As soon as the bullet hit him, he hopped up and took a couple steps, putting himself behind a bush and out of sight. I looked at Matt and Tanner, trying to confirm I had put him on the ground. Although I was pretty confident I got him, I wasn’t 100% sure it was a kill shot.

We tip-toed a little further forward and to the side for a better angle, and there he was, my Thumper! Tanner gave me a thumbs up, and my entire body started shaking. One shot, one kill! After some celebratory fist bumps and a hug or two, it was time for the real work to begin. We hiked through the draw, up a rocky cliff, and pushed our way through a bunch of brush that led right to my beautiful beast laying there in all his glory. He had one side of his antlers resting perfectly on an old Native American metate. Matt looked at me and said, “This guy was meant to be yours,” referring to my Native American heritage.

What a blessing this hunt was, and to be able to do it with some amazing people was a dream come true. Moments in life come and go, but moments like these create memories that will last a lifetime. Thumper scored just shy of 350".