The Two-Year Stalk Came to an End 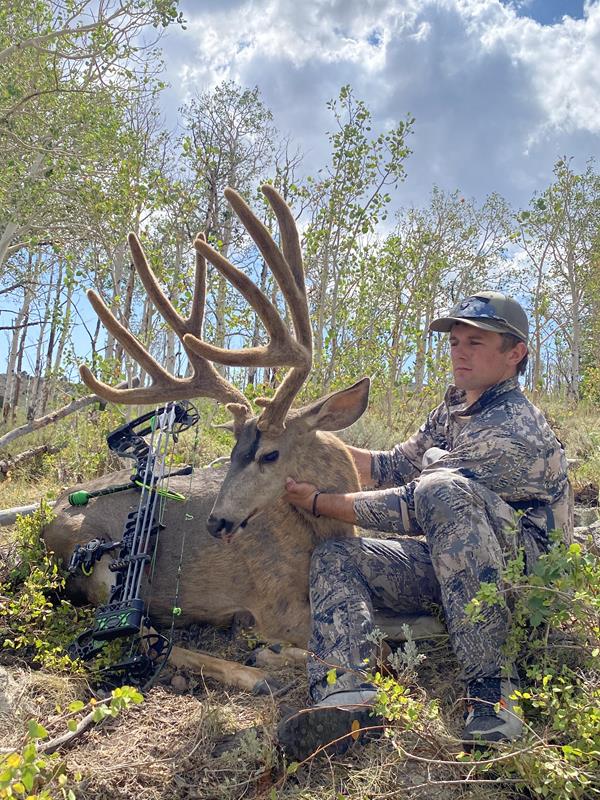 The summer of ‘19 is when I first laid the glass on “Flare,” and I immediately knew he was going to run my life for the next three years. I had drawn the Utah Dedicated Hunter tag and made it my goal that it was “Flare or bust.”

Locating him in late July, I still had a few weeks to pattern him, and man, could this buck cover some ground. My dad and I spent days setting trail cameras, glassing, and racing the sun to and from work as we watched this buck finish out his summer growth without another hunter seen. With a game plan set, we loaded the camp trailer and headed for the hills. What happened next still blows my mind. Flare jumped out in front of the truck three and a half miles as the crow flies from where we had watched him for weeks. The brakes were to the floor, a near miss occurred, and confused looks fell on our faces. Speechless, we watched him trot to the tree line, taunting us by feeding in and out until dark. I felt nervous that he had changed up his schedule but excited that I could finally hunt him at sunrise.

A new plan was made, and we slept very little. The next morning, we set off on a hike to get a better angle for glassing. My dad quickly located him at 450 yards, and he had picked up a doe and another stud buck overnight. We closed the gap and waited for the deer to make up their minds. Into the ravine or back in the thick trees? After about 30 minutes of backtracking with no shot opportunity, he finally broke off from the other deer and fed very quickly up the ravine we were at the top of. There I was, full draw on Flare’s ribcage. My dad ranged and whispered, “Just breathe. He is at 40 yards.” He only needed a few more bites to be out of the trees, offering me a clear shot, when he bolted straight past us and stopped at 120 yards. I was still at full draw, hoping the best of the situation, so I proceeded to sneak to a tree about halfway between us. When I had peeked out behind the tree, he was gone. On our hike back to the truck, reasons of why he busted us were running through my head when my dad simply said, “Shawn, he didn’t get big by being stupid, you know. This just means we get to keep hunting him.”

Fast forward through the 2019 season and into 2020 when we hit the summer scouting even harder. Any given chance, my father or I were covering ground, narrowing in on him. I drug some trusted friends and even the girlfriend up the hill and found some solid bucks, but I found myself sleeping in the truck by Flare’s canyon the week leading up to the archery hunt. What I joke was just luck, my girlfriend, Brylie, claims is skill. The second day into my hunt, she glassed up a group of big bucks right where I originally found Flare. I scanned through them a few times. They were all familiar bucks but still not the one I was after. I continued glassing through the canyon when she insisted one was big. I knew I couldn’t take my eyes off the spotter. Trying to stay calm, we watched him peek over the hill for a quick meal and retreat into his hole of thick pines full of my trail cams.

I knew he was smart and that I had to be patient. The next eight sleepless days went by with no more sight of him. By now, I had moved on from sleeping in the truck and had my camp trailer on the hill. On August 24th, I left straight from work alone with the intention of glassing the “what-if” spots. Thirty minutes before sunset, I found him. He was with a smaller buck, feeding quickly across the sidehill on his way to a bench that connected two peaks. I knew that if I beat him to the trees in the bench, I might have a shot. I beat him to the trees unseen and slowly army crawled and ranged repeatedly until I had him at 90 yards. I did not want that shot, so I awaited his move. An eternity of 10 seconds later, he bedded down with the sun. Disappointed and more trigger happy than ever, I withdrew to the four-wheeler. Once I caught my breath, I briefed my family and close friends on what had happened. Jesson Williams, who was hunting that night as well, had the next day off and offered to come spot for me the next morning. We met at the trailer for a bowl of Ramen, knowing tomorrow was the day.

An hour after sunrise and past the time I had to leave for work to be on time, we still hadn’t found him. I am a firm believer in “one more time,” so as we gathered our things, I did one last scan of where he had bedded the night before and caught the tips of some velvet. It was him. I phoned John Mogle to see if I could come into work late that day, and he replied, “You bet. Go get that sucker!” Game on.

With Jesson on the spotter, we agreed on some landmarks and I ditched my pack and went in. Flare didn’t stay in the open for long. He continued up and over into a small basin about halfway up the hill. Jesson radioed for me to work slowly into the quakies when I got to the biggest boulder on my path. Stepping on dry leaves and deadfall, I decided to stop for a few minutes and just listen. Flare’s hole was behind me, so one way or another he would have to cross me to get there. I listened and heard that distinct sound. Not the branches breaking sound that cows make, but the sound that the buck I had wanted so badly was near me. After a few minutes of quietly glassing through thick trees and shrubs, I caught his antlers through a tree at 64 yards. With absolutely no shot, I army crawled to my left where there was a slight opening. As I peeked out from behind a tree, his two-point buddy had me pinned. I didn’t have a clue on what to do, so I laid on my stomach, sprawled out for about 15 minutes. I finally heard more movement, so I fumbled for my radio. They didn’t bust me, they had backtracked their way out of the basin and into Jesson’s sight again.

I retreated to where I came from just like the deer did and regained sight with Jesson across the canyon. He informed me that Flare was leading the pack and not backtracking every 20 yards. I worked my way around the tree line to get closer when my radio hit static. Standing on a rock in the trees where only Jesson could see, I raised my bow in the air. “He’s probably 200 yards up the hill. Should feed right to you!” Jesson said.

I leaned out of the tree line and ranged him at 174 yards. I took a few deep breaths, killed the radio, and attached my release. Flare fed quickly on the tree line until he was on top of me. It seemed dead silent until I could feel my heartbeat pounding in my head. Tucked under a tree and focused on Flare, I didn’t notice the two-point whipping his tail on the sagebrush next to my head. Just one more step and it was over. I pulled back as slowly as I possibly could, rested the pin, sent one arrow right through him, and jumped up in disbelief. Jesson called my phone immediately after the shot as we watched Flare along with the rest of the herd try to make it to his hideout.

Jesson had watched it all. He had seen me set up under the tree and pull back followed by deer bolting. We both gained elevation and played the waiting game, glassing for any of the deer. Approximately an hour, or 30 phone calls, later, the deer came barreling out of the trees they had entered, all the deer but Flare. After a phone call celebrating with my dad, I phoned my colleagues at Fierce Firearms. Gage Mogle and Preston Snyder were already on their way up with a cooler full of ice and to help with the pack out.

My dad and I made countless memories chasing this buck as well as everyone I dragged up the hill throughout the two years. Notching my tag and all that I learned was just a bonus. Thanks to everyone!