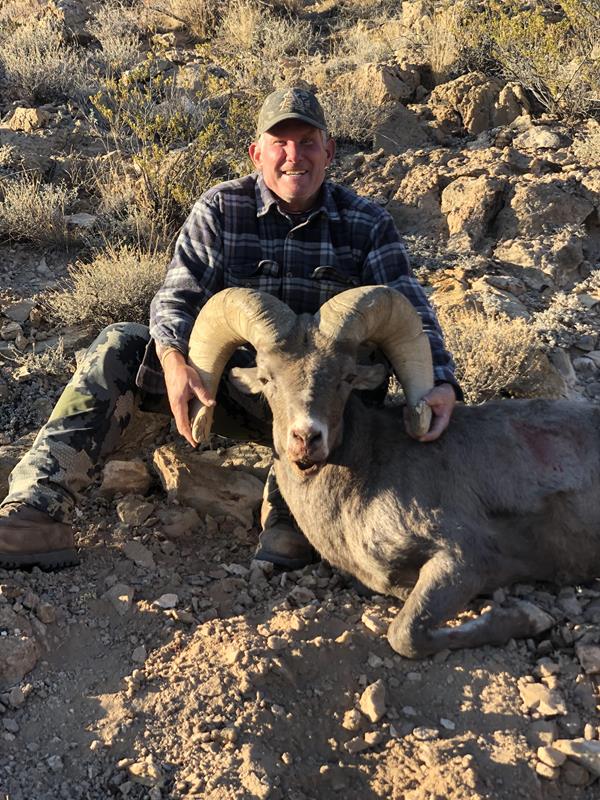 Among hunters in the West, the chance to get a Desert sheep tag is considered one of the holy grails of hunting. Most hunters never get a chance at one tag, but I have had the good fortune to have drawn three.
As an Arizona resident, I have a better chance of drawing than most people, but it is still only about a 1% chance for most hunts. In 1979, I got lucky to draw my first tag. I was only 26, married, and out of school for only three years with no money and a pregnant wife to support. I had been drawn for the Barry Goldwater Gunnery Range where access and hunting days were limited. I scouted about eight days and managed to hunt seven days, but while I saw some nice rams while scouting, I never had a chance during the season. Hunt number one was over.

In 1997, I got lucky again with my second sheep tag. By this time, I was a much better hunter. I was much more knowledgeable, and I was determined to make this hunt count. It was in a unit that had not had a sheep hunt in over 10 years, and I was the only tag. The wildlife manager for the area was a great help, and he showed me maps with survey sightings and even went out with me on one scouting trip to show where he would go. I considered going with a guide, but since no guide had any experience in this particular unit and I had help from my good hunting buddy, Michael Mills, I felt confident about being able to find sheep, especially with a full 31-day hunt.

The year turned out to be a bad one for that unit as I scouted for 17 days and then hunted for 17 days. In those 34 days, I only saw one immature ram. We surmised that the fall rains had fallen further to the east and the sheep had simply moved out of the mountains. Hunt number two was over.

I had been applying outside of Arizona for some years. For New Mexico, I had used a Huntin’ Fool Endorsed Outfitter, A3 Trophy Hunts, and had applied for Desert sheep. When I got an email on April 22 that said it was from the New Mexico Game and Fish Department, I thought it might be a friend spoofing me, but it was real. I had been drawn for a Desert sheep hunt in New Mexico.

My first call was to Jordan Hall from A3 Trophy Hunts, and he congratulated me on drawing one of the premier tags for that state. He was the perfect person to help guide me as he had guided the Governor’s tag holder in that unit in 2018 and had another tag holder there in 2019. With Covid, it was a crazy year, but my wife and I were able to take a driving trip to the area on the way to visit friends in Colorado just to look around and soak in the atmosphere of the hunt unit.

The hunt started on Tuesday, December 1st. I drove the five hours to the hunt area and met Jordan at camp on Sunday. After introductions, I got settled and we went out that afternoon so he could give me a small tour of the area. We glassed for a couple of hours with no luck, so we made our way back to camp. Jordan’s brother, Ethan, was at camp along with Jordan’s partner in the business, Ryan Nogosek. They were there to help scout for the day before the season.

The next day, Jordan and I headed north into the unit while the others headed to the south and east. Jordan and I set up on a favorite spot of his, and within 30 minutes, we had spotted a small group of seven ewes and three small rams. An hour or so later, I felt good when I spotted a nice ram on my own. He would have been a shooter in Arizona, but he was just a so-so ram here.

During the last day of scouting before the hunt, we spotted other sheep, including a nice group of bachelor rams that included the ram I would eventually take. When we got back to camp, another A3 guide, Isaiah Conklin, was there to help.

Opening day of the season saw Jordan, Isaiah, and me heading to the north while Ryan and Ethan went down south to glass. Isaiah spotted the same group of ewes and smaller rams right away. We split up, and after hiking to another glassing spot, we spotted another group of sheep with a nice ram that was deserving of a closer look. However, at that time, Ryan called with news that they had found a group of four rams, including a very nice book ram. The rams were butting heads and acting very rutty. We got back to the truck and began the two-hour trip down to their area. We got there in the early afternoon, but the sheep had moved into the hills and canyons further away and were out of sight. Jordan knew about where they were, so we set up to glass and did so until dark with no further sighting.

The weather on the second day was very cold at 20 degrees, and when we were leaving before dawn, a few flakes of snow came down. Soon, it had turned into a light but persistent snowstorm with low clouds that dropped visibility to less than 200 yards. Ryan headed further down to another area while Ethan stayed at our last sighting spot to hopefully have the clouds lift. Jordan and I moved to explore some new area and hoped for the clouds and snow to lift. It finally did about midday, and Jordan and I went back to the last spotting area and tried to find the rams again. Finally, just before dark, Jordan spotted them moving over into a small canyon.

In the meantime, Ryan had gone back to the bachelor group of rams he had spotted the day before the season.
The next day, Jordan, Ryan, and I went back to try to locate the four rams again while Ethan went to relocate and monitor the bachelor group. After glassing with no success for a couple of hours, Jordan hiked about two miles to another location to get a better angle on the area while Ryan and I kept glassing. When nothing was located by midday, Ryan and I drove to Ethan’s location and took a closer look at the bachelor group he was watching. They had moved only a few hundred yards all day, so when we got there, I had eyes on them for the first time. It was agreed that the other ram we had seen was larger, but he was nowhere to be found. Ryan and I decided to close the distance to take a better look.

After a mile-long stalk, we were on a ridge 280 yards from the rams so I could get a closer look. What impressed me most was the character of the largest ram. His horns made a deep curl and then curved up with nice brooming. I decided that he was what I wanted. I took my time, placing our backpacks down for a nice, solid rest. I told Ryan I would take my time and do it right and then proceeded to rush and miss what should have been a fairly simple shot. At the shot, all six rams ran off about another 75 yards to the top of their ridge. Luckily, the largest ram was in front, so when they all stopped to look back, I had settled down and put the next shot on the money. We could hear it hit, but all the sheep went over the ridge, so we weren’t certain. After about five minutes, the other five rams ran out of the canyon and we knew he was down. After only a 41-year wait, I had my ram. I took this ram with the first rifle I ever had, a Remington 721 in .270. My father bought it used from a friend in 1964.

I want to thank Jordan Hall, Ryan Nogosek, Ethan Hall, and Isaiah Conklin for their work in getting me on that ram and giving me a great hunt. I am especially grateful to my wonderful wife, Terry, for her understanding over all these years and for her support in my endeavors. Now I just have to turn all of these bonus and preference points in several other states into a Rocky Mountain sheep tag.