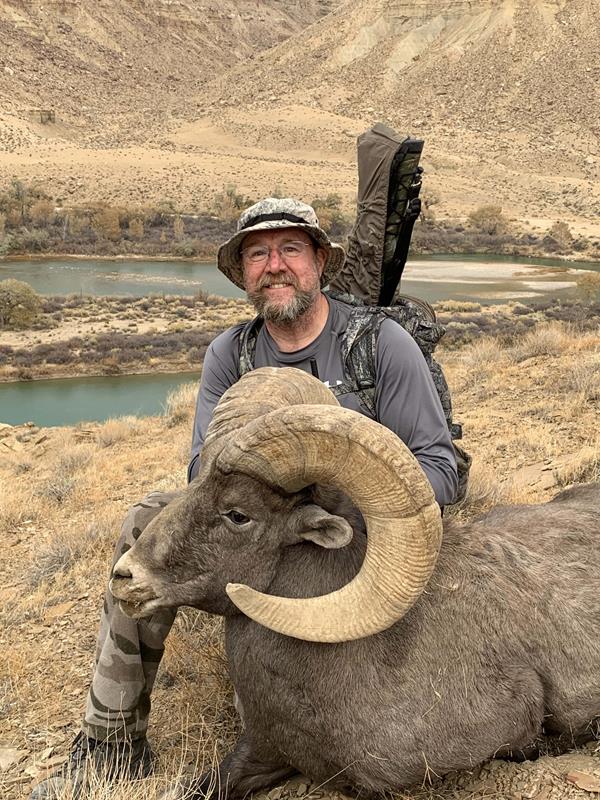 With 11 years of non-resident points, I drew the tag-of- a-lifetime. I grew up in the Eastern Sierras hunting and trapping and spent my whole life dreaming of a bighorn sheep hunt. When I was notified of my draw, I spent six months researching and preparing for the Utah hunt. I spoke with past tag holders from Huntin’ Fool, local biologists, online hunting forums, and a nice local rancher/guide, Coby Hunt, from Green River. He explained what to look for in judging the rams, their behavior, and movement. Along for the ride was my hunting partner of 15+ years, Kevin McMurray, my daughter, Karen Vallauri (who has been hunting since she could walk), and her husband, Cody. This was Cody’s first out-of-state hunt. Those two had no idea what a ride they were in for.

The first four days were spent glassing, walking, and covering a lot of beautiful country. We saw rams every day but nothing big.

The fourth evening, Kevin and I found a beautiful ram lying on a sandstone point 325 yards away. We took pictures and talked about his horn configuration. At first, I was excited, but I didn’t think his bases were that large due to the gap between his horns. When he turned, I could see he carried mass very well, but the tight curls made me think his horn length was not as long as I may have thought. He was a very nice ram, but he was missing the “wow” factor. Kevin is usually telling me not to shoot, but this time, he said, “Shoot! Shoot!” He reminded me that Karen and Cody only had a couple of days left with us and I didn’t want them to miss out. I decided to shoot. Just then, the ram stood up and walked over the point, out of sight, up and over the first climb of the coaster. Was this all there was?

Back at camp, we looked at the pictures and I got that sour pit in my stomach. I really blew it. He was a very nice ram and I didn’t take the shot. We decided we would all be on site before light to find the ram. Morning could not come soon enough. I told Kevin the road to redemption for a mistake like the night before was going to be long and hard. We eventually found the ram mid-morning and watched him most of the day, but he was in an inaccessible spot, tight on a hot ewe. We saw that an outfitter had also found the ram. I talked with him, and he had a client waiting in town. With only a couple hours of light left, we checked out another canyon where we found a group of four ewes that stayed in the back of the canyon and another group with a 7-year-old ram with three ewes. We watched the ram and ewes work their way down to a small finger of water.

The next morning’s plan was the same, except I expected company, knowing guides were after the same ram. We eventually found him. He had picked up a couple more ewes and a 7 to 8-year-old ram. I watched them move off the top and onto the ribbon cliffs and lost sight for a while. The guide came up past us, and then on his way back down, he stopped to talk. He said they were giving up for the day. I should have known better. The sheep moved out of the rocks, and we moved to a better spot to set up our scopes. We ranged the ram at 545 yards, and I set up on a nice rock to take aim with my bipod out, pack under the back of the rifle, scope dialed in, and steady as a rock. Kevin and I could not figure any easy way to get up to the ram once I killed it. We glassed up and down looking for access points and finally agreed to shoot and worry about extraction later. The ram looked majestic in my scope. Bang! The ram fell. I know I’m a good shot, but I never killed anything without squeezing the trigger. (I can laugh about it now.) Actually, I yelled the loudest F-bomb ever. Someone else shot the ram. My roller coaster derailed.

I asked Karen and Cody to quickly go to the canyon we had glassed the night before to look for the four ewes that did not have a ram and see if they had any company. I also told them to take a very quick glance at all the canyons on their way. Kevin and I had a short chat with the guides and their client. Both guides were professional, and I apologized for the F-bomb I’m sure they heard. Halfway to the canyon, we came across the kids glassing. I said they better hurry up and get down the canyon. I had a feeling. Kevin and I got to our glassing spot first, and I quickly picked up the ewes across the river and up the canyon on my tripod mounted 10X binoculars. I could see they had picked up a good ram. Kevin had finished setting up his scope and I was just getting mine out when he said, “You don’t want your scope. You want your raft in the water!” I looked through his scope and saw the “wow” factor I was looking for. I was back on the rails and on the upward climb.

We left Karen and Cody behind to watch the ram, take pictures, and load up all the gear Kevin and I left scattered in our excitement. We paddled across the first part of the river to a large island. We were halfway across the island when the first ewe appeared 310 yards away. They covered a lot of ground quickly. I found a spot I could shoot from, and where the other sheep watered the night before was in between us and the sheep. The ewe stood there as the ram came up behind her on her left and stopped. Her left leg was just at his vitals. Soon, the other three ewes crested and the ram lay down. All I could see was his head and magnificent horns. The waiting game was intense. Different scenarios kept playing through my head. If the ewes did not come down to water and turned back, I would only have a split second to shoot the ram as he stood up. One or two steps and he would be gone. Finally, the first ewe walked down about 30 yards towards the water and stopped. A little while later, the ram finally stood, but instead of following the first ewe, he went to push one of the others. Twice I had a shot as he stopped, but he turned his head toward me and blocked his vitals by his massive horns. Then, he stretched his neck out to test the ewe in front of him and that was it. I fired. I could hear my daughter’s screams of excitement from across the river behind me as I watched the great ram lay motionless. What a ride!

Running on exhilaration and adrenalin, it was two hours before I was able to hold such a magnificent ram of the Nine Mile Gray Canyon area. What a feeling to be able to share this with family and friends. Karen took a lot of photos and video as she recently started an Instagram and YouTube channel for women hunters. It was dark as we loaded the packs after skinning and quartering the ram. Donning our headlamps, we started the very steep descent to the river. Once there, we regrouped and started shuttling the kids and gear across. Six hours after the shot, we were back at camp tired and safe.

Never in my wildest dreams did I think it would pan out this way. The roller coaster ride was a great one but not over yet. Coby Hunt, a local guide, caped out the face and put me in touch with the local biologist, who met us on a Saturday evening to check-in the ram. It green scored an unofficial 188 0/8" and may net a hair below 186". This should place him in the All-Time Utah Top 10. If he didn’t broom off his right side, he would have scored in the low 190s. Utah produces some great rams.