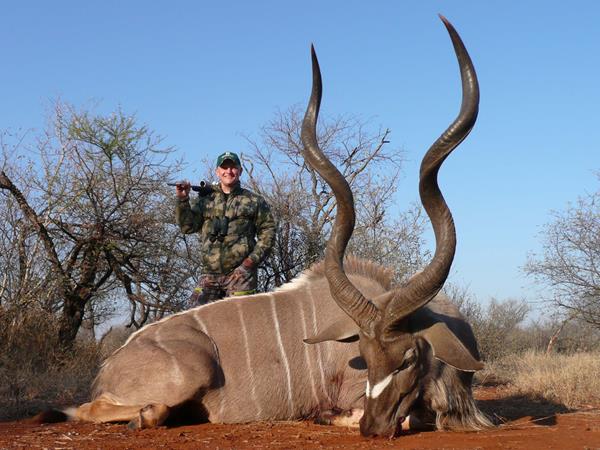 Our family had dreamed of embarking on an African safari for many years. Conversation after conversation in the evenings at our hunting shack in northern Minnesota centered on the idea that we should someday make a trip to Africa to go on a safari. One day, the discussion got serious thanks to our close friend and fellow passionate hunter John Coulter. John is a former social studies teacher who is passionate about teaching people the world of hunting. His teaching and communication skills lead him to be an activist in the Wild Sheep Foundation. He has completed the Grand Slam of North American Wild Sheep in addition to the 16 African safaris he has completed. With John’s passion and direction, we had no choice but to book this hunt-of-a-lifetime with Erik Visser of Quagga Safaris. After nearly 18 hours of plane travel, we arrived at Quagga ready to enter the bush, pursuing our dreams. Our hunting package included five animals apiece.

The Almos family (John, Jack, and Andy) and Bob Ladehoff, along with John and Muriel Coulter, hunted for 10 days in the Limpopo province of South Africa. This life-changing experience left a lasting impact on all of our lives. Our hunting experience had been mostly chasing the whitetails of Minnesota and regular trips to the western states for mule deer and antelope. This was far beyond our wildest dreams!

A top priority was for each of us to take a trophy kudu bull. This proved to be a huge challenge. They call the kudu the grey ghost of Africa, and for good reason. Time and time again we would begin a stalk only to be left wondering how that 700+ pound bull simply disappeared. Spending 10 days chasing these magnificent creatures concluded with us taking three great bulls. When the measuring was complete, John’s bull was 55", Jack’s came to 54" with deep swirls, and Andy’s bull was 51". In total, we were fortunate to take 23 animals on our 10-day hunt. Each animal was as magnificent as the next and each adding to the African experience. Gemsbok, impala, warthog, blesbok, red hartebeest, steenbok, wildebeest, and Zebra were the other animals that hit the dirt on our South African safari. South Africa is a target-rich environment! Many times, while stalking one species, we’d run into another species on our hit list and the hunt would quickly change focus. For example, a zebra hunt may have concluded with taking a trophy wildebeest. This makes hunting in Africa so exciting and unlike most of the hunts in North America.

One of the unforgettable stalks was Jack’s experience trying to hunt a magnificent eland bull. Jack and his professional hunter, Eon, were diligent about every step. Keeping the wind in their face, the bull was all but on the ground. After several minutes of cat and mouse, the bull snapped to attention. Jack and Eon couldn’t believe their eyes. Did this bull really bust them? They did everything right. No, they weren’t busted, but emerging from the bush no more than 40 yards away was a giant Cape buffalo bull. The eland didn’t care to have this old bull buffalo hanging around just as much as Jack and Eon. The hunt quickly changed from the eland to making sure the buffalo didn’t take issue with their presence. Buffalo were not on the hit list, but Jack was worried this bull might quickly become an addition to his trophy room out of necessity. Eon’s experience hunting Cape buffalo came in handy as he quickly made noise to try to assert dominance over this bull. The bull postured at Jack and Eon but realized the fight wasn’t worth it and disappeared into the African bush. Jack and Eon made their way back to the safari truck disappointed to not take the eland but happy their encounter with the buffalo ended without a charge.

Every stalk was a thrill, but another memorable one was Bob’s hunt for his gemsbok bull. ET was the professional hunter who found this bull for Bob. As soon as ET laid eyes on him, he knew this was a bull worth the chase. This was a monster! It wasn’t just his size of the horns that stood out, but also how old he was. You see, Bob’s bull was approximately half the body mass of your average gemsbok bull. This meant he was a very mature bull that was very close to the end of his life. His body was lean, but his antlers were far from it. Bob and ET stalked within 80 yards of this bull. Bob was able to squeeze ET’s Remington .280 off and make a clean kill. This was exactly the kind of bull we were after. He was mature in age with a set of horns we’d been dreaming about. He was a tremendous trophy to add to Bob’s beautiful lake home in Northern Minnesota.

Andy was the first to complete the five animal hunting package. With several days to go, he decided to add a gemsbok to the hit list. ET was able to track down a beauty in short order. After spotting the bull from the truck, the bull took off on a dead run away from the vehicle. Andy and ET set out on foot to try and close the distance. After several hundred yards, the bull was in range. Andy was out of breath when ET set up the shooting sticks. ET said, “Right on the front shoulder, now!” Any hunter knows that in this situation your heart is racing and adrenaline is pumping. For Andy, this was magnified because they had just run 200-300 yards and now he was suppose to be perfectly steady on the shooting sticks. Luck was on his side as his .270 rang out. The bull disappeared into the bush but collapsed after 40 yards. A trophy 36" gemsbok bull was coming home to Minnesota.

As our safari was quickly coming to an end, John set out to track down a trophy blesbok ram on our final night of hunting. As the sun was touching the horizon, Eon and John glassed a group of blesbok and there was a shooter in the bunch. With time fading and a sundowner celebration (champagne at the lookout tower) looming, John settled his .300 WSM and made a 320-yard shot at a tremendous blesbok ram. One shot is all it took to bring down this beautiful creature. This was a hunt John will not soon forget. He had taken a 17 3/8" ram. This ram, no doubt, met the qualifications for the record book.

African plains game are tough critters that require a marksman to achieve excellent precision with shot placement. Their vitals are much farther forward than North American game. A shot slightly too far back can make recovery that much more difficult. Fortunately for us, our professional hunters, Eon, ET, and LJ, were great teachers and took the time to educate us on this important task before we entered the bush. Words cannot explain how good these professional hunters are.

Each animal has its unique story and circumstances. Each night around the campfire, our group would swap stories from the day and make plans with our professional hunters for the next day. Ten days go by extremely fast in the African bush! John Coulter told us before we left home, “You’ll never be able to wash the dust of Africa off you,” (both figuratively and literally) and he was right! We cannot wait to book another African safari. This once-in-a-lifetime experience will hopefully become twice in a lifetime. I encourage anyone thinking about guided hunts to consider booking an African safari. You won’t regret it!