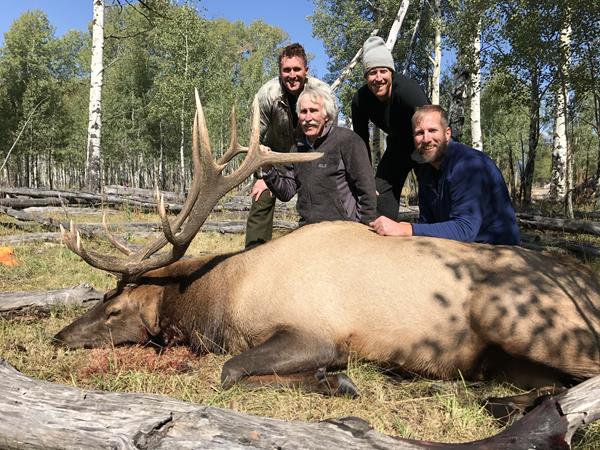 If you were to ask me who was the most influential man in my life, the answer would be easy, my dad! For the past 40 years, I have been hunting and fishing with my dad and two brothers, three of the best and most important men in my life. The brothers, as we often refer to ourselves, have had the true privilege to be led and taught by a man who understands the role of father and now grandfather. His needs have always been a distant second to everyone else, especially when it comes to hunting and fishing. It has always been about his boys getting their deer or elk and never about him filling his tag. Honestly, he could have killed all of our animals, but that was never important to him. At the time, I didn’t understand why he was so willing to sacrifice for us, but then I became a father and it all made sense.

Recently, Dad was diagnosed with Alzheimer’s, which is news no one wants to get. True to form, though, Dad didn’t miss a beat and refused to let the disease define him or limit his experiences. I only mention this to help paint a picture of the man we are celebrating in this story; I would not want anyone to think we are looking for sympathy. Sure, we would change it if we could, but not if it meant changing everything else.

All of that brings us to our hunt and an opportunity to turn the table and make a hunt about Dad. He was 71 years old and had been part of countless hunts, yet he had never killed a bull elk. This was a bucket list item for the brothers, to pay Dad back and be a part of him killing his first bull elk. Knowing the window was closing, we thought it was time to cash in our Wyoming points. With one less than max for all four of us, we knew we should be able to choose a hunt that would meet Dad’s needs and provide a chance at a great bull. Killing a monster was never the goal. If it happened, great, but we just wanted a bull he would be proud of.

As a member of Huntin’ Fool for years, I quickly pulled out my past issues and began to scour each unit. After a number of phone calls, I chose a unit, submitted our applications, and hoped for the best. We had enough points to draw, but it wasn’t a sure thing.

Fast forward to September 15th and the hunt was about to start. Our area had been especially hot and the rut seemed to be delayed, but luck was on our side and winter made an appearance. Temps dropped, and the bulls put it in high gear. The rut was on!

We spent the next few days immersed in more elk than I can ever remember. Mornings and evenings were filled with the sounds of elk bugling. Finding the right bull and the right setup was key, and on the third day of the hunt, opportunity arose. A beautiful mature bull was managing his cows from a distance with no knowledge of our presence. We quickly devised a plan that would put Dad at a point we felt the elk would cross. Now we just needed the bull and his cows to agree and follow our plan.

Not more than 30 minutes had passed, and the elk were right on schedule. Dad was set up and had acquired the bull. He just needed him to stop in an opening. The bull stopped but right behind an aspen tree. Dad waited until the bull stepped into the opening, and without any prompting, he squeezed the trigger. The bull was down. Dad had killed his first bull elk.

It wasn’t a record book bull, but that was not the point. This was about payback and honoring a man who has given so much to his boys and his family. This is a memory that will last forever!