The Goat Gods of the Beaver 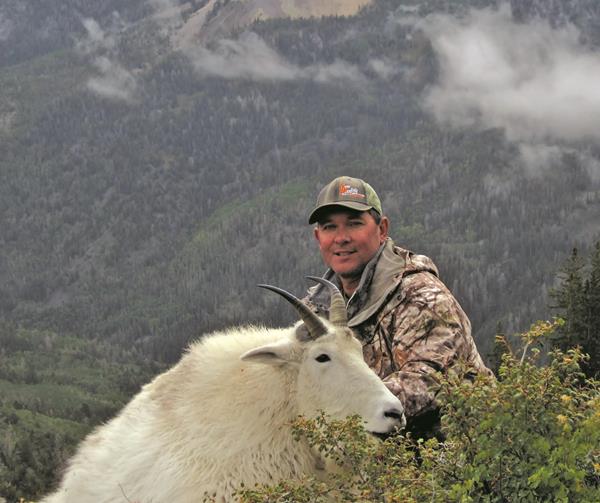 As my guide, Rusty Edwards, crept back from the rock outcropping, he said, “Your goat is just below us, but we have a problem.” You’ve got to be kidding. After 18 years of applying and now standing on what seemed like the top of the world, the goat was below us and we had a problem?

I started applying for a Utah goat tag in the 90s. My kids were little, and life was busy with the usual, sports with the kids, homework, and, of course, running the business and finances. Along with everything else, I had struggled with Crohn’s/colitis since 1985. I was on nearly every drug known to modern medicine. Each time a new drug was FDA approved, it was prescribed to me, and on four separate occasions, I was hospitalized from a reaction to the drug. It was challenging, to say the least.

Fast forward to December 2016 when my doctor announced that my colon was shot and beyond treatment with medication. The only option was a colectomy, the complete removal of the colon. In February, the surgery was successful. After spending several months with an ileostomy, the next surgery reversed the ostomy. After an infection and 10 more days in the hospital, I was back home. Sitting in my office, I realized the Utah draw had been a week or two previous. I pulled up the draw results, and instead of the usual “Unsuccessful,” I saw a hunt number. No way! I immediately changed the screen to my credit card account. If this was real, they would have billed my credit card, and they did! Now what? I had drawn a once-in-a-lifetime tag and had trouble walking 50 yards without getting lightheaded. I could turn the tag in and wait another year, or I could get my butt in gear. With encouragement from my wife (the health nut phys ed teacher) and my kids, one of whom is a strength coach for the Cincinnati Bearcat football team, I decided to go for it. With about three months until the hunt, I had to get serious.

After numerous phone calls and some advice from Jeff Warren at Huntin’ Fool, I booked with Bryant Johnson and Gone Hunting Outfitters. Everything seemed to be progressing, but I still had some apprehension in the back of my mind. I decided a short vacation with my wife, Ann, to Utah would be prudent to see exactly what I was getting into and if it was realistically possible for me to get in goat shape. Bryant invited us for a tour of the goat country in the Beaver area, and we were on our way to our first vacation without kids since our honeymoon in 1986. We thought we were going to spend a night with Bryant in his parents’ rustic cabin, but to our surprise, it was a spectacular lodge in the middle of the mountain and we were greeted with what seemed like a family reunion. Bryant’s wife and daughters and the whole Gone Hunting crew showed up to go look for goats. The evening was spent with spotting scopes and two truckloads of us looking at many goats. We had never met any of these people, yet we were treated like long-lost relatives. It was just awesome.

The rest of the summer was exciting with weekly photos of goats sent to me from scouting expeditions and trail cams at 10,000 to 12,000 feet. They were hiking up there to check trail cams to find the best goat they could for me. On at least one occasion, Bryant’s daughter, Kymber, climbed the mountain to check a trail cam and above her in the clouds was what we proclaimed the Goat God. Not only was it above the trail cam, but it was also above the spot where I killed my goat.

September finally arrived, and I was hiking several miles with a 30 lb. pack and feeling great. Arriving two days before opening day, we continued scouting and keeping tabs on what was the best goat found in the area so far. My guide, Rusty Edwards, is a wealth of knowledge in long-range shooting, so we checked my gun at the higher elevation and established a ballistics chart. We were prepared to shoot up to 700 yards if necessary. That night, we put five billies to bed, including the one I wanted.

Opening day found Rusty, Brett Miller, and me heading up the mountain in the dark. It was easy going until we hit shale slides. Thankfully, I had brought the recommended trekking poles. Then the wind began along with sleet and rain. The hood on my raincoat was flapping like my dog’s ears when he sticks his head out the window of my truck.

After what seemed like an eternity, we reached the top and were above the goats. Now all we had to do was drop down the side and find them. Partway down, we spotted two smaller goats. Rusty advised me to load my rife. As I took my glove of and laid it on my knee, the wind picked it up and took it of the mountain. Now all we had to do was sneak down a barren shale slide and get around the two goats bedded below without spooking them and the other three we assumed were bedded below. Mission accomplished as Rusty had spotted the three below, but there was a problem. We had the gun dialed in for out to 700 yards, but the billy was only 70 yards away. After some quick calculations, Rusty decided I would hit two inches low. I was advised to hit the goat high on the shoulder and anchor him so the cape and horns weren’t destroyed from a tumble of the mountain. As I watched the goat dig the dirt like a dog, finding the perfect spot in his bed, I was trying to do the math. The hair over the shoulder was extremely long, the gun was going to shoot two inches low, and I was shooting at an extreme downward angle. I had just spent three and a half hours gaining 1,500 feet in elevation, and I had spent 18 years of my life waiting for a tag. I was overwhelmed with emotions. I really needed to think this through and relish the moment, so I had a plan. I told Rusty that the goat had laid there for hours the day before and he had just settled in. Rusty confirmed that the wind was good and the goat was content. Perfect. I told Rusty I was going for a walk. At first, I don’t think he thought I was serious, but I had no colon and Mother Nature called. I was on top of the mountain and about to shoot a trophy goat, so I needed to relax and think this through.

I am always amazed when a plan actually comes together. With one shot, the goat stayed put and the cape was spectacular. While taking pictures and caping, little did I know Jeremy was heading up to help pack everything out. We were just about done when he arrived. He put the lifesize skin in his pack while Brett and Rusty divided meat in their packs and away we went. Eighteen years of dreaming of a trophy goat and the whole experience was everything I had hoped for and more. Thanks to the guys at Gone Hunting, to my wife for supporting my hunting obsession, and, of course, to the Goat Gods of The Beaver.