Sometimes It Just Takes A While 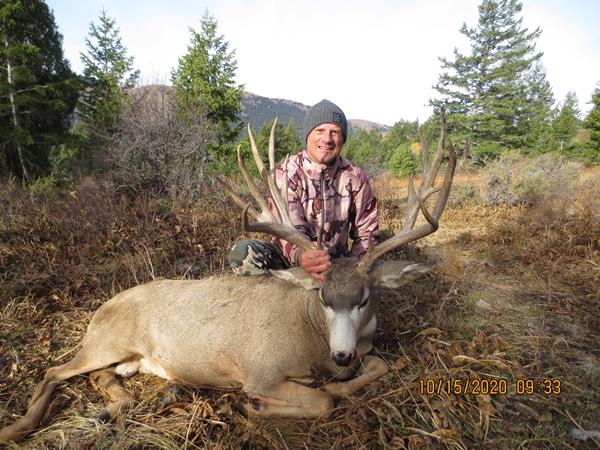 I moved to Idaho in the late 1980s and experienced some wonderful years of mule deer hunting. In 1990, I harvested an Idaho giant, a buck the state is renowned for. From that point forward, I was simply obsessed with mature mule deer bucks. There are several good books and a plethora of articles on the subject. I read anything and everything I can get my hands on that pertains to the subject. It’s generous of the authors to share their tactics and successes. I have become a better mule deer hunter because of it. The experts don’t find full agreement on how to go about finding and killing these elusive creatures. This leaves the pursuit to an individualized way of being successful. Taking this information and adapting it to one’s own situation can greatly improve one’s own success.

In September 2014, I found a buck that was unique in the respect that it was extremely wide. Not a high scoring buck, but unique nonetheless. A main frame 30"+ buck is rare, and this one, I guessed while scouting him, could be as wide as 35". Without the help of a friend (thanks, Layne) this buck would never have been killed. We ended up tagging him on the sixth day of the season. He turned out to be 33"+ wide. What made him even more unique was that he had bite and claw marks on his back from a mountain lion attack a few weeks earlier. How lucky we were that he survived and that we were able to put a tag on him. That was the last time I fired a shot at a deer in Idaho. Since then, the well had run dry on bucks that we were interested in. We found some nice bucks, just nothing that really got us going. Little did I know what was in store exactly six years later.

A five-year lapse without firing a shot, some years not even chambering a round, can seem like an eternity. This is the routine of selective harvest and OTC general deer hunts in Idaho. In these units, finding a mature buck four years or older is an uphill battle. Buck numbers are low, and there are thousands of hunters per unit. Success rates hover around 20%-30%, and about 7%-10% of hunters harvest a 4-point. Maintaining a good attitude and realizing it’s the joy of being in the field for fun and adventure is what makes the journey exciting and tolerable.

2020 started similar to the previous few years. Deer and bucks but nothing great. The two harsh winters in the previous three to four years were showing their effects. We headed to the old reliable unit that started and stoked my obsession. This area has been generous to me for over 30 years. A friend and I went to one of my old standby locations (thanks, Shannon, for suggesting it). We utilized tactics that I had read about, and we trusted what our guts told us. Somehow, the outcome was so much different than it had been dozens of times before. For some reason, the mule deer gods shined on me again and on the exact same day as 2014. October 15th is becoming a must-hunt day. It is truly a privilege to hold and experience a rare specimen like this.

Knowing the odds of harvesting not one, but two great bucks in the same unit is completely unexplainable. He wasn’t quite in the class of my buck from 30 years earlier. Nonetheless, he is a special animal that would be a trophy in almost any hunter’s mind. I realize how fortunate I am.

It’s difficult to know what the future holds for these fascinating animals. Mule deer populations are below objective in almost every western state. The factors leading to this are disease, habitat fragmentation, drought, and numerous others. The demand for mature bucks has never been greater, and hunters are willing to do almost anything to be part of harvesting one. Can they withstand the pressure? There is some hope on the horizon as data on migrations and survival have emerged and we are learning more at a faster pace than ever before. It’s crucial to continue these studies. If mule deer are your thing, support your local or national mule deer conservation organization.

The six-year wait for this buck was more than worth it. Will I ever shoot another deer in Idaho? I hope so. If not, this is a hell of a way to go out.