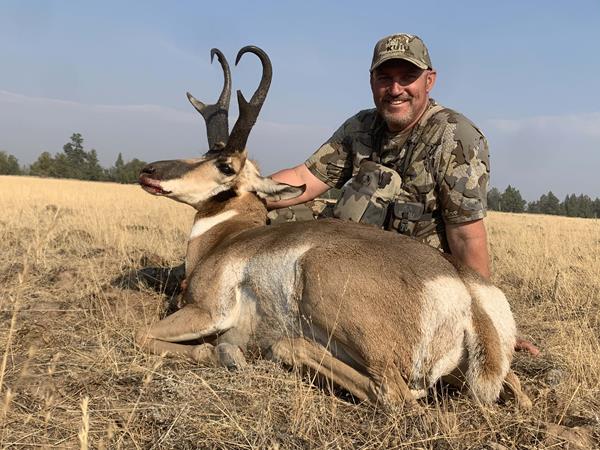 Wyoming, Arizona, and New Mexico come into most hunters’ minds when going after antelope, not California. I had been applying for a California antelope tag for 18 years, and this year, I had a gut feeling that it was my year to hunt antelope in my home state.

The draw results came out in late June, and I was checking the Fish & Game’s website hourly for a couple days until I saw that magic word – Successful! I knew I was going to be busy with my wife and I trying to sell our home, moving into a new home, and my buddy, Randy, and me getting ready to go to New Mexico for an antelope hunt the weekend prior to the California hunt. A scouting trip just wasn’t in the cards for the California hunt since it was a six-hour drive to where we would be hunting.

I had talked to a few people who had hunted the area in prior years and also to a good buddy of mine, Dante, who lives just south of the hunting unit. Dante, Randy, and I gathered all of our information and decided to head up the Thursday before the season started. Hot temps, wildfires all around us, and most of all, the overabundance of wild horses and predators made the scouting somewhat tough to locate many antelope. We located three different bucks, and one of them we thought we should take a second look at on opening morning if we could locate him again.

Opening morning came, and we were able to locate the buck that we found the prior day of scouting. After studying him for a while, I decided that I would hold off and try to find a bigger one since it was only 30 minutes into the season. We put a ton of miles on Dante’s “Goat Getter” (Polaris RZR), glassing every sage flat in the area. We didn’t see another antelope until 4:30 that afternoon when Randy was able to make a good shot on a nice buck.

On the following day, we were in the same area looking for the buck that we had spotted on opening morning. He was nowhere to be found, just a handful of does. Sunday was the same as opening day, a lot of miles put on the “Goat Getter” and a lot of hours behind the binoculars and spotting scopes. However, that afternoon, our luck started to change. We were starting to see more antelope. A group of about 25 antelope fed out into a flat that gave us a good look, but there wasn’t a buck anywhere with them. Fifteen minutes later, Dante spotted two more goats. I played cat and mouse with them, looking to see if there was a buck with them. After sneaking in to 140 yards, I found a buck. He wasn’t big, but he was looking good enough for me since I had only killed one antelope before, and that was the weekend prior in New Mexico. I waited for a clear shot, but the buck never presented one for me. The antelope spooked and took off across the sage flat and out of range. As I was walking back to Dante and Randy, I was thinking that all I wanted to do was get some food in me, regroup, and give it one last go in the morning. I located Randy and Dante, and Dante said he had a spot that he wanted to check out.

As we were coming over a little rise, Randy excitedly said, “There are some antelope under that tree.” They were in the shade, so we couldn’t tell if there was a buck with them. As they moved out from under the tree, Randy said,” There’s a buck.” I got into position for a shot as Randy was giving me yardages. I kept saying to myself, “Be calm and make a good shot.” For some reason, the group of antelope started coming towards us. Randy said to get ready as they were at 440, 380, 260, and the last number I heard was 210. Boom! Antelope down! I never looked at the horns, I just knew he was a buck and that I was going to take him. I didn’t know what I really had until we walked up on him and Randy said, “Dave, you just got yourself a book buck.” After a phone call to my wife and a bunch of pictures, we had the buck field dressed and loaded on the “Goat Getter” to head home.