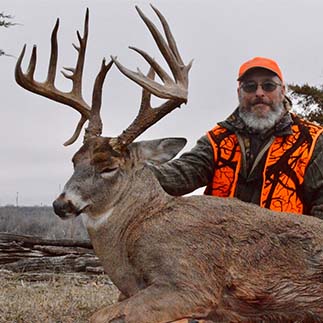 In December of 2019, I was hunting a big 10 on a cattle farm in western Iowa. It is a farm my father and I, along with a rotating group of friends, have hunted since 2001. Over the years, we have been very fortunate to harvest some really nice bucks. My first buck was a non-typical 8-point that scored 184" SCI, and I have several racks hanging on my wall that score between 150" to 170". Even in an area that produces large bucks, the big 10 stood out. Dave Schmidt, a local friend, runs trail cameras on the property, and he had been sending us pictures of the big 10 all summer long. Needless to say, we were all extremely excited about the upcoming deer season.

When opening day of Iowa’s first gun season rolled around, I was hunting one of the stands that overlooked a field of cut corn known as “The Milkhouse.” We had a south wind which prevented me from hunting my number one stand set up on The Milkhouse, so I was 100 yards further away when the big 10 made his way across the field to his bedding area. I ranged him at 220 yards, and even with the stiff 10-15 mph wind, I was confident I could make the shot. I shoot a Marlin lever action 45-70 with Hornady Leverevolution cartridges, and I regularly practice out to 350 yards. At the shot, the big 10 jumped like he was mortally hit and ran out of the field. I was excited beyond belief. I made my way over to where he was standing, and I saw a spray of blood. Tracking was easy because we had a light dusting of snow. I followed the running tracks and a good blood trail to where he entered the bedding area. The blood trail quickly slowed to small drips and then stopped all together. The only sign of blood was in his left front track where the blood had run down his leg. I followed his track as far as I could and determined that I had not made a lethal shot and only inflicted a flesh wound. I was utterly crushed. I went from the highest of highs to the lowest of lows. After relaying my misadventures with the big 10, I was depressed and non-talkative the rest of the week.

In the spring of 2020, Dave gave me renewed hope. A couple of guys who bowhunt the property found the big 10’s sheds. I was happy he survived and did not end up a meal for coyotes. The sheds scored in the high 180s. Later that summer, the big 10 started showing up on the trail cameras and he was looking a lot bigger than the previous year. The preparation and anticipation started. I mounted a new Leupold VX-3 to my 45-70, and even with the ammo shortage, I practiced often. I was ready and looking forward to the long drive from Pennsylvania to Western Iowa.

December finally arrived, and I found myself sitting in a portable box blind that Dave had built. I was located in the middle of the cut cornfield of The Milkhouse halfway between the two existing stands. Normally, I do not hunt out of box blinds. I like to have the freedom and mobility to go after any deer I see, but this blind was set up in the ideal spot and allowed me to stay undetected in the middle of a cut cornfield. The day started out with only a handful of does and two small bucks crossing the cornfield. I stayed in the box all day because the deer bedded on the ridges surrounding the field could see any movement in the corn and I did not want to risk spooking any vigilant whitetails.

When 3:30 arrived, it was like a switch was thrown. Deer started pouring into the cut corn to feed. At first, it was the does and fawns coming out, and not just one or two, it was groups of four to six until there were over two dozen deer feeding around me on all sides. Soon, bucks started to appear. The first couple to come out were basket- racked 1 1/2-year-olds. They immediately started feeding.

Then, a couple 130" bucks showed up. They checked out some nearby does then commenced to feed. The sun was starting to set, and every subsequent buck was getting bigger. The next one to show up was a 140" 10-point and immediately on his trail was a big white-racked mature buck that I needed a closer look at. When most of the bucks came into the field, they would drop into a shallow ravine out of sight and then crest a small hill 100 yards from my stand. I already had four bucks within 100 yards of my box while I was waiting on what I thought was the big white-racked buck to crest the hill. Through my Swarovski binoculars, I watched the next buck crest the hill and immediately thought, ?That buck is a lot bigger than I thought. I need to shoot that deer.”

I traded my binos for my Marlin and took aim. I heard my first shot hit with a solid thump, and he only ran 30 yards before stopping. I am an advocate of, "If the animal is still standing, keep shooting.” I shot again. When he fell into the field, I saw the distinctive droptine and sticker points of the big 10. I started to get excited. After making sure my buck was not getting up, I raced across the field to where he lay. I was speechless.

I took a couple quick, poor quality photos and texted them to my father and Dave, and then I sat down next to this magnificent animal that had given me the chance to redeem myself. All totaled, there were five of us hunting the big 10’s core area. I was praying someone in our group would get this deer just so I could lay my hands on his rack and find some closure. I was hoping, but I never expected that I would get a second chance.

The recovery and celebratory photos that followed were done in a dream- like haze. It was not until later the following day when we put a tape measure to his rack that we realized how much antler growth he had added since last year. We came up with a green gross score of 225 5/8".

I have to thank Dave Schmidt. Without you, this buck might not have been put on the ground. Thank you, Mike and all of your family, for inviting us into your lives and letting us hunt your property. Thank you to my beautiful wife, Carolyn, and our wonderful children, Heather, Matt, Lily, and Sophia. Most of all, I want to thank my mother and father, Ray and Dolores Jennings, for making me the Huntin’ Fool that I am today.