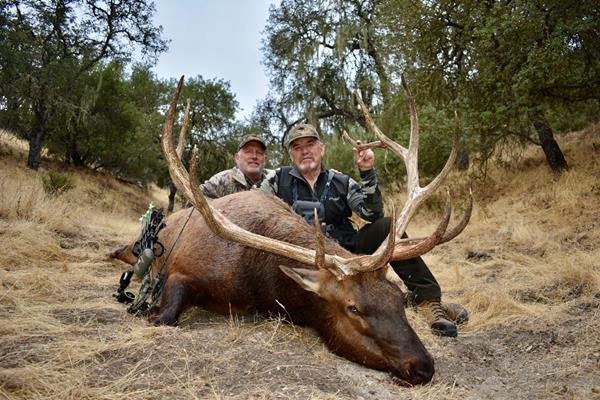 If you read last year’s story “Triple Brow” in the Huntin’ Fool magazine, you’ll notice this is a continuation of our quest to take a Pope and Young world record Tule elk. I thought we had accomplished it last year after taking Triple Brow, one of our target bulls in 2020. However, there were almost 37" of deductions, taking him out of the running.

In May and June 2020, trail camera pictures began to help us narrow down a list of bulls we thought would make the score. By the July 2nd opener, we had three bulls in that class identified. Hunting Central California in July means temperatures in the 90s to low 100s. Sitting in blinds over water is the best method for success in early season as the rut is still a month away.

Tom Fowler had booked a Tule elk hunt with me the last four years, taking four bulls over 300". For the first two weeks of the season, Tom would be the only hunter in camp. We would first be targeting a bull we had named “88” the previous year. He had lost 10" since last year, but he was still a 350" class bull. Last year, he disappeared soon after the opener. and he did the same this year. Within the first few days of the season, he was no longer showing up on our trail cameras. We adjusted our focus to the southern end of the ranch where our number two bull was watering at a few locations. He was a straight 6-point bull with huge third points and no crown points as most of our mature Tule bulls will have. All of his points were long and even. He would have very few deductions.

The big 6-point was somewhat predictable as we would see him up and feeding before dark as he made his way to water. The problem was, he would use one of three water sources and it was usually after dark. We would need to have Tom in the right blind on the right day to make this happen.

This turned into a hunter’s test of patience and perseverance. From July 2nd to August 3rd, Tom spent over 80 hours in a blind, with some days exceeding temperatures over 100 degrees. There were several opportunities to take other bulls, some of them in the 300"+ range. Trail cameras continued to show the big bull using the water sources usually after dark with a few daytime pictures.

The afternoon of August 3rd, Tom was in the blind again several hours before dark. Thirty minutes before dark, he heard a bull walking behind his blind. A 300"+ 7x7 bull came into view going straight to the water. The thought of taking this bull as he watered some 30 yards away was heavy on Tom’s mind. This bull was on our watch list and was a great one. If we were going to settle, this would be a good one. Bow in hand, Tom was ready. I’m sure you know what happened next. The big 6-point bull took the same path as the first bull. At 30 yards and with a well-placed arrow, the big bull only went 50 yards before going down.

After getting word of the bull being down, all who were helping on the hunt converged on the location for the celebration. After pictures and a quick in-the-field score, we realized we may

The bull was invited to the Pope and Young panel measuring in Reno and was scored by two different teams of three measurers to confirm the score. He is still considered a potential number one, but it will be announced as the new Pope and Young world record Tule elk at their convention in July.
I want to thank Tom for being such a great friend and client. Also, thanks to all the others for helping make this a successful hunt. So now what? Tom has booked another hunt for the 2021 season. Stay tuned.