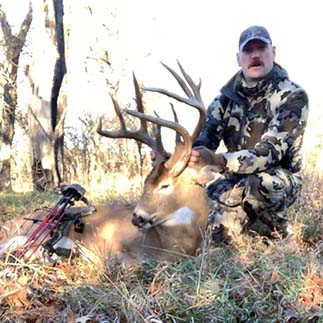 It was a beautiful week in Kansas, and the rut was in full swing with bucks starting to roam and appear during the daylight hours across the public land I was hunting. I was focused on this area for the past two months where I had quite a few nice shooter bucks identified. There was one buck I called “Quigley,” and he was that dream buck every hunter wants to see on their wall. He was a brute of a buck with a unique rack for what was visible in my cheap, hazy game cam pics taken in the middle of the night.

Quigley first made his appearance on film September 9th as he was cruising through a soybean field to fill his belly and gain weight for the upcoming rut. He disappeared and was a complete ghost until he resurfaced on another game camera during the start of peak rut November 10th at 1:34 p.m. I was planning on going out that day in that exact stand but decided to save PTO days for the coming weekend and let the rut develop further along. I about tipped off my office chair when I got the picture notification, and my stomach sank as I thought this was my chance and I just blew it by not going out on that frosty Tuesday morning.

It was now Saturday, November 14th, as I geared up and headed out to my stand an hour before shooting light with a plan to work the wind to different stands throughout the day as the deer’s movement was expected to change. It was a semi eventful day. I had a decent 8-point follow my scent drag to my stand 15 minutes before shooting light and enjoyed watching him work his nose trying to find that Miss Doe before he kept on his journey and disappeared into the brush. As I moved to another stand before lunch, I was on foot, creeping quietly along a trail when I spotted a small forky working his way my direction. I stepped aside against a tree on the downwind side of the trail, and he cruised right by me at five feet. I could see the drool and smell the hormones as he brushed by me.

The rest of the day was quiet until I was walking back to my truck. As I was strolling across a soybean field in the dark into the wind, I looked to my left and saw a black mass sprinting towards me. I thought to myself, “What is this?” I decided I didn’t have time to nock an arrow and draw, let alone take an accurate shot in the dark, so I grabbed an arrow out of my quiver and dropped my bow off to my side. Then, to my disbelief, it was a nice shooter buck standing there 10-20 feet from me with his head in ramming position and stomping, pawing, snorting, and wheezing at me. He was evidently disappointed I was not a doe, and he switched from lover mode to fighter mode. I barked and yelled at him as he continued to paw and grunt at me for what felt like eternity but was likely around 20 seconds before he peeled out. As I stood there confused, rushed with adrenaline and checking my shorts, I continued to the truck, trying to figure out if that was real or if I just imagined it.

The following morning, I went directly to my tree stand with my head on a pivot as I crept through the dark. I chose to enter my tree stand to keep the wind and my scent as priority and risked taking the louder path. I felt like a rhino in a china shop as I tripped over branches that broke as loud as firecrackers and rocks went rolling like there was a major landslide. By the time my butt got into my tree stand, I felt like the whole world heard my presence and I was going to only enjoy a nice sunrise without any hunting action.

To my surprise, 30 minutes after shooting light, I spotted an ivory flash through the brush on my downwind side. How could this be? I strained my eyes to distinguish what was branches and what was a rack. All I could tell was that we had a shooter. He appeared to be creeping his way into a thick bedding area, so I opened my remaining doe estrus bottle and launched it into my shooting lane to take advantage of the wind and drift the enticing scent into his direction and I started doe bleating. That got his attention. I got him within 20 yards, tail flickering and head bobbing trying to see where she was. I then noticed a doe was with him, and I could see she was in heat as she was squatting/urinating consistently and the invitation was on the table. I sat there patiently as they took care of business and my only chance was to hope this doe came out into my shooting lane with her boyfriend following.

Suddenly, she was on her way out into my shooting lane. I waited to draw until her head was behind a tree and before he came fully out. As I got my eye into shooting position, I noticed my 30 and 50-yard pins were broken. It must have happened last night from dropping my bow in the preparation of buck battle royale.

I took my best judgement on where my 30-yard pin used to be and let it fly. Even though the buck was moving like an elephant, he had reflexes like a cat. He was quick enough to spin 90 degrees, which resulted in the shot placement to his back leg. As I saw him sprint off, I about puked thinking I just blew my shot and subjected this beautiful buck to a non-lethal shot. As the buck sprinted down his escape route, he stopped at 70 yards. I watched intently at what his next move would be. I could see blood pouring out of the wound with every heartbeat, and he stayed on his feet as long as he could before he finally tipped. The shot placement ended up taking out his femoral artery.

I couldn’t believe it! I got my composure for a few minutes and focused on not falling out of the tree on my descent. When my feet hit the ground, it felt like I was walking on a cloud.

I walked up to this buck thinking it was nothing more than a nice 10-pointer. I was in disbelief when I looked at his left antler(s). It was Quigley, and my assumption of a possible double main beam was true. Here lay Quigley in the morning sun with a beautiful 4x4 main beam rack with G2 cheaters and a billy club of a third antler. I paid my respects to this beautiful buck and soaked in the moment as I knew there would likely not be another one that would match it in my life.