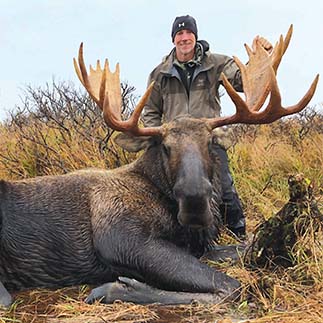 Twelve years ago when I joined Huntin Fool, I took their advice to start building points for the western states that I longed to hunt. Scouring each magazine for advice, one key point jumped out at me time and time again. To be successful, I needed a plan. With limited funds, a young family, and very little time off from teaching and coaching, I would apply for lottery type tags. This would allow me time to build points and save extra cash for when my kids were older and our family was settled.

Like any good plan, I needed a Plan B. I planned to supplement the waiting game with self-guided hunting and fishing trips. Over the years, I had talked to many people about their adventures and one finally caught my attention. A friend of a friend of a friend had just returned from a self-guided moose hunt in Alaska. Having always wanted to experience Alaska but hearing many horror stories of dishonest Alaskan taxi services, this personal recommendation of an honest and hardworking company was music to my ears. I immediately called Renfro Alaska Adventures and talked to the owner himself, Wade Renfro. His knowledge about the moose population, hunting tactics, organizational skills, and honesty had me excited. Hunting dates were picked for two years out, and a payment plan was made.

Two weeks in the Alaskan Frontier was going to require a great hunting partner. My friend, Eric, would be the man for the job. We immediately began the planning and early morning workouts this trip would require.

It is amazing how fast two years goes by, and I can say I enjoyed every minute of the research, workouts, and anticipation for this hunt. Having seen more than one Huntin’ Fool member draw two premium tags in one year, I decided to continue with my original plan of applying for premium tags across the West. After 12 years, I finally drew my first tag, a New Mexico oryx tag in August. What a fall this was going to be!

With our hunt starting on a Monday, we left on Friday in hopes of getting into Bethel, Alaska late Saturday morning. With any luck, we would be weighed in and in the field a day early. As with all hunting adventures, patience is key. The Alaska weather slowed things down, but Renfro’s worked hard to keep things on track. Finally, our number was called, but only one guy was getting flown in. It was Eric’s tent, and he won the coin toss to shoot first. At least we would have one guy behind the gun on Tuesday morning.

Climbing into the Super Cub late Tuesday morning is a feeling I will never forget. The anticipation of achieving a lifelong goal of hunting a moose still gives me goosebumps today. Eric met me at the plane and already had seen a cow and calf that morning. We quickly put the finishing touches on our camp and began to lightly cow call. Less than an hour into our calling sequence, a small bull walked towards us. He quickly cut the distance to 20 yards as I trashed the brush in front of him. I continued to call and play the wind with the bull becoming even more aggressive and finally chasing Eric up into a tall pine tree! As the young bull stood below the tree looking up at him, I could only smile and think, “Yes, Alaska was worth the wait.”

Days two, three, and four were all spent the same with 14 hours of calling and glassing. Late on day four, a very respectable moose came out of the timber less than 30 minutes behind a passing boat. We decided to pass the bull in the fading light and wait to hear from Wade on what he wanted to do regarding the number of hunters we were encountering. Wade has a policy of no other hunters within a seven-mile radius of your drop location, but the uncommon high water must have allowed local sportsmen a pathway to new hunting grounds.

With the temps falling into the low 20s overnight, a beautiful frost-covered sunrise reminded us we were in God’s country. Seeing two boats motoring up the creek below us, we made the tough call of getting moved to another location. Our spirits were high when Wade himself picked us up and assured us this wasn’t normal. Having all our own gear and dehydrated food made the transition to the Beaver plane quick and flawless. Trevor, our new pilot, was excited about our new drop point. The landscape of willow clumps, small ponds, and wet bog was totally different from our last camp. Our Plan B was really starting to take shape.

Camp was set up in record time, and we climbed a small hill for the only elevation to glass the last hour of fading light. As we glassed the tundra and willow patches, we spotted a huge bull a couple miles out. The cow was trying to bed down, but the bull had a different plan. He would take his enormous antlers and toss her into the air.
As we ate our dinner back at camp, we started our calling sequence into the darkness. It was only a matter of hours before we had a bull grunting and clicking around our tent. When a second bull joined in, I had to wake Eric to enjoy the show. We got very little sleep that night as a third bull joined the bachelor party and cruised around our tent.

I was chomping at the bit to get out hunting the next morning. I wanted to get to the vantage point under darkness and be in a position to spot that giant bull from the day before. Working as a team, Eric suggested we wait until first light to make sure we didn’t bump any bulls that might be sticking close to camp from the previous day’s calling sequence. With the coast clear, we snuck out of the tent and began to follow a willow brush draw up the hill. Not even 80 yards from camp, I spotted a moose cresting the small hill and walking right towards us. Kneeling down and with the wind in our favor, we watched as our first shooter moose closed the distance quickly. At under 100 yards, I took the shot and he was down 20 yards later. Eric’s call was a game changer for us. We were only 100 yards from the lake and would have the moose waiting for pickup by noon. This gave Eric the next three days to hunt, and it allowed us the ability to cover some ground if another giant bull was spotted miles out.

Day seven had us going with the exact same plan, except Eric wanted to glass from camp in hopes of spotting or calling a bull to us and preventing a long pack out. It didn’t take long before I glassed up the unmistakable white paddles of another bull. After studying the willow patch he was in, we turned up two more cow moose. With the aid of our yardage finder, we estimated the bull to be at one and a half to two miles out from camp. With three days remaining to pack the animal out, a game plan was set and the stalk was started.

We watched the bull rub willow brush and tend to his cows. Following the edge of the swamp was going to be a challenge, but it was our only way of covering our approach. We got 500 yards downwind of the secluded willows and quickly picked up the two cows, but the big bull was nowhere to be seen. We decided to belly crawl another 200 yards closer and hoped for a better view of the animals. We couldn’t believe our eyes. The massive bull was bedded in the open tundra out of the wind, sunning himself. Eric was set up in the prone position, and we waited patiently for him to stand. Time passed by quickly as Eric kept focused on his target and the moose began to stand. On all fours, Eric made a solid hit, and two more quick shots to the boiler room left the moose lying in the wide open on dry ground. As we walked up on his moose, the antlers continued to grow in size and character.

I would like to thank Eric for his willingness to tackle the Alaskan Wilderness by ourselves and fully commit himself to our goal and dreams. I would also like to thank our wonderful wives for supporting our quest for adventure. Thanks to Renfro’s for treating every drop site as if they would be hunting there themselves, and thanks to Huntin’ Fool for giving me the information I needed to come up with a plan, even if it was a Plan B!