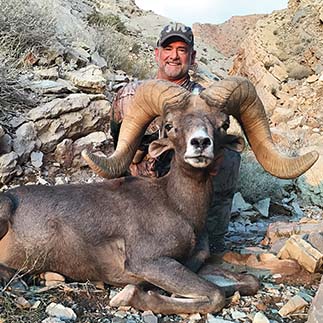 I can’t believe I actually said this, but I did. “Getting my limit on a good day of chukar hunting is equally as fun as you guys getting a sheep.” I said this to my two closest hunting buddies, both sheep hunters with their world slams. So says me who had never been on a sheep hunt. I think I even believed it when I said it.

The morning of the 2019 Nevada big game draw is a big day for hunters. I was in Santa Barbara at a family friend’s wedding, and my phone chimed at 5:00 in the morning with the message, “It’s out – did you get anything?” I quietly got out of the hotel bed, snuck into the bathroom, and logged in to the Nevada Department of Wildlife website to look at my results. I had drawn not one, but two sheep tags, and both were my first choices – California in 031, the Double H’s, and Desert in 268, the Muddies. Normally, I avoid waking my beautiful wife early at all costs, but this was different. I was literally shaking when I explained what had happened, and she politely said “That’s nice, honey.” She clearly did not understand what had just happened. I then proceeded to tell half of Reno and anyone else who would listen as to what I had drawn.

My friend, Steve, and I had decided that if we drew a Desert tag near Las Vegas, then we would use Silver State Guides. He said they had been getting some big sheep the last few years. At 5:15 a.m., I called the number on their website and a sleepy Colby told me, surprisingly, that I was his first call. I booked the first week of the Desert hunt with Colby and Blake.

For my California bighorn tag, I decided to go with my friends, the Puryears, with Nevada Guide Service. This hunt was a blast. I scouted and hunted for days. Hunting for California bighorn in September in the Nevada desert is hot. We found many ways to make shade, and we saw rams every day. The day we finally decided to kill my California bighorn was nasty and windy. The stalk was incredible, and it took a long time to close the deal. The wind was crazy, but after a couple of shots, he was down. Including scouting, I had shot my sheep on the fifteenth day of the hunt, and it was a nice California bighorn.

One thing I found that I loved about sheep hunting is the social side of it. For example, when deer hunting and I see a deer in my binos or spotting scope, I know within a few minutes, sometimes seconds, if I am going to pursue it. On the other hand, with sheep hunting, I found things to be much different. I describe it as an intellectual/social experience. When we were glassing and would see a ram, the discussion would begin. I might hear comments like, “Carries his mass well, but he is short on the left,” or “His horns are longer than they look,” or “Is he broomed on the right?” Even when we made a stalk to get a closer look at a ram, we still would be quietly discussing the nuances of his horns. I had many friends on this hunt, and I was now addicted to sheep hunting. Chukar are cool; sheep are awesome!

Heading to Southern Nevada on November 19th, it looked like we were in for quite the rainstorm for opening day of Desert bighorn. This was significant because it had not rained in area 268 in over 180 days. It was so dry over the summer that in September, many of the big game guzzlers had dried up. When discovered, the Nevada Department of Wildlife saved the day by doing emergency fills of the guzzlers to help the animals. The guzzlers in the wilderness areas were not accessible, however, and therefore could not be refilled. This meant that many of the normal haunts of big sheep had changed.

When I arrived at camp, there were four of us – my college friend, Mark, Colby and Blake from Silver State Guides, and me. The night before the hunt, the guides shared stories of the big rams they had seen last year and scouting this year. One in particular piqued my interest, a ram they had named “Zeus.” They thought he was a high 170s ram, but they had yet to see him this year.

Opening morning was crazy. It rained like we were visiting the Amazon, and the roads became interesting to navigate. We saw many sheep and a few nice rams. Day two brought more rain. Colby and I spotted what we thought was an interesting ram about three miles away on top of the mountain, so off we hiked. The washes had amazing streams in them, and the temperature was perfect for climbing. When we found the ram at the top, he wasn’t the right one. By chance of being at the top of the mountain, however, we had cell reception and I got a call from Blake and Mark. They were looking at a nice ram that they thought I should see. It was 90 minutes back to the truck, an hour drive, and then another hike to meet up with the boys. After looking at this old warrior of a ram, I decided to pass. He was big, but we could see that he had a penchant for fighting and breaking his horns. The rain had stopped, and the afternoon was a nice one. We hiked back to the trucks and decided to head to another area to glass.

On the way out, we spotted a ram with some ewes, and he looked to have some potential. We stopped the truck and carefully planned our stalk. I was pretty worn out, but the glimpse of the ram had me ready to hike again.

When we finally caught up to the ram, I lay down and set up for a shot. I had a solid, prone rest, and I dialed the custom turret on my gun to 350 yards. I started to calm my breathing. The ram was gorgeous – symmetrical and hardly broomed. I was ready, but Colby quietly whispered to me that this was not the class of ram we were looking for. Even after he said this, I stayed on the ram. He was a cool ram, and I debated if I should take it anyway.
At the beginning of the hunt, I had told Colby and Blake that I was a good shot. I trusted my gun, and if Ihad a good, solid rest and good conditions, I would get the job done. I also told them that if we saw a big ram, they would be better off just telling me it was a shooter than saying it was a giant so I would not get too excited during the shot. Then, Colby said, “Shoot THAT ram.” He pointed up above the ram we had been stalking. Blake whispered 550, and I dialed my turret and eased back into position. I found the ram that had just walked into view, and itlooked nice as well. Blake said, “I think it is Zeus.” I took a couple of deep breaths and squeezed the trigger. I thought it was a good shot, but then I heard, “You missed to the right.” I found Zeus again in my scope, still chasing a ewe, apparently not interested in what I was doing. Thankfully, he gave me another chance and I squeezed off another shot. I heard, “Hit!” and watched Zeus calmly walk over a hill. “Let’s go,” said Colby, and the chase began.

We were well into the afternoon when we located Zeus lying in a small ravine. I had done it, but what I had done and what was to come I did not fully comprehend. When we got to the ram and picked up his horns, they were truly gigantic. Colby and Blake were over the moon. Their energy and excitement over Zeus were incredible and something I never will forget. Colby kept saying, “He’s a giant!” and Blake would correct him and tell him, “No, he is giant!”

Zeus ended up scoring 185 4/8" gross and 184 7/8" net Boone & Crockett. He is the third biggest ram ever shot in Nevada. What respect I have for sheep and sheep hunters. I’ll always love to hunt chukar, but sheep hunting is my new passion