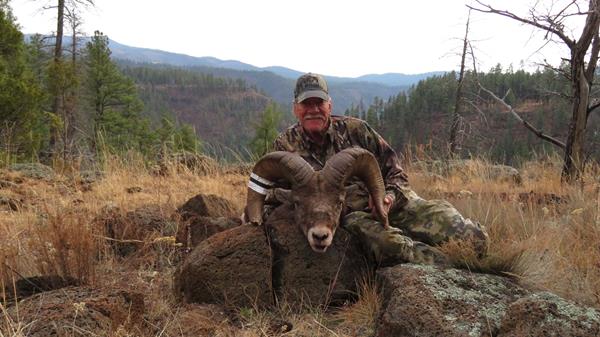 The pilot announced we would be landing in Phoenix in about 20 minutes. My travel time from Maine to Arizona seemed to have taken less time than usual. I guess it was because my mind had been racing 100 mph recalling all the events that brought me here. I would be hunting Rocky Mountain bighorn sheep with the White Mountain Apache Tribe.

My dream of someday going on a sheep hunt started when I was just a kid reading hunting magazines at the local library and drug store magazine rack. Although the dream never left my mind, life’s responsibilities dictated that I would have to be satisfied with Maine whitetail hunting for many years to come.

It wasn’t until the year 2000 that I finally did something that added a whole new dimension to my hunting lifestyle. I joined Huntin’ Fool. I still remember Garth Carter’s famous words, “Apply, Apply, Apply!” That I did, and I was rewarded with some great western hunts. In 2013, I drew my first sheep tag, a Desert bighorn hunt, compliments of the Arizona Big Game Super Raffle. At 68 years old, this flatlander from Maine was finally going sheep hunting. That year, I harvested a great ram which made the cover of the June 2014 Huntin’ Fool. Then, Huntin’ Fool’s advice placed me in some of the most beautiful country British Columbia has to offer where I harvested a great Stone ram. In August of 2018, I hunted the Mackenzie Mountains of NWT, Canada where I harvested number three, a nice Dall ram. Now, I just needed a Rocky Mountain bighorn to complete my Grand Slam.

It was in January of 2018 while reading Huntin’ Fool’s Reservation Opportunities section that I noticed the White Mountain Apache Tribe in Arizona offers a Rocky Mountain bighorn sheep hunt. I called the number that was listed and talked to Jesse Palmer. He is the White Mountain Apache Tribe Game and Fish Wildlife Biologist. Jesse was very informative and answered my many questions in regards to the Rocky hunt. At the end of the conversation, I signed up as an applicant for the 2019 sheep hunt.

I was pleasantly surprised in October 2018 when I received an email from Jesse informing me that I had been awarded the 2019 Rocky Mountain bighorn sheep hunt. He also furnished the name and phone number of a previous hunter as a reference. He happened to be a Huntin’ Fool member as well, who was very receptive to answering my many questions and sharing his hunt story with me. My Apache guide would be Lead Guide Brody Guy, who is the Wildlife Tech for the WMAT Game and Fish. Brody called to introduce himself, offer congrats, and share his email address and phone should I need to reach out to him for anything. Buddy Daley, another Apache guide who would be assisting Brody on this hunt, also called me with the same messages and information. I thought this to be very professional. The advice from everyone was that the end of October would be the best time to start my hunt. I agreed, and then I completed and mailed all the necessary paperwork to the WMAT. The hunt was booked. Now it was the hardest part, the one-year wait.

While I was waiting for my duffle bag to come out on the beautiful day in the Phoenix airport, my phone rang. It was Brody saying he was on his way. As I was reaching for my bag, a big arm came around and grabbed the bag and hoisted it onto my luggage cart. I turned and said, “Well, hello, Brody.”

The hour and a half ride to camp through Apache Reservation Land was pleasantly scenic and very diverse. When we arrived at the WMAT world-class trophy bull elk hunting camp “Maverick,” I understood why elk hunters keep coming back here year after year. They not only have excellent elk hunting, but they also have a very comfortable camp. After stowing my gear in the cabin, Brody and I walked up to the dining hall. Brody introduced me to Apache guide Buddy Daley who was busy grilling the evening meal. Brody then introduced me to Challis Colelay, another Apache guide, who would be helping Brody on this hunt. In the days to come, I would learn that the A-Team (Apache Team) that was chosen to guide me on this hunt was as good as it gets!

Our hunt day started just before daybreak with coffee and a big breakfast and then into the truck for a ride to the day’s chosen starting point. We would then hike to a high vantage point where we would split up and glass canyons and distant mountains until our eyes hurt. After lunch, we would move to another drainage and continue glassing for the rest of the day.

“It is getting better every day.” Those were Buddy’s famous words as we headed out that early morning.

There was one area, Pacheta Falls, that we would check every day. The guides had this place pegged as a hotspot for sheep. However, no sheep was usually the answer after a thorough glassing every day. For some reason, though, we did not go to this drainage this day. Instead, we went to an area a few miles on the opposite end of it. We hiked in, spread out, and started glassing. I wasn’t settled in for more than a few minutes when I turned and saw Challis coming towards me almost at a run. When he got close he said, “Let’s go. Buddy spotted a ram.”

Buddy had positioned himself out on a rock outcropping which allowed him to glass all the way back into Pacheta Falls and he spotted the white butt of the ram as he moved along the canyon wall. Now we had to scramble back to the truck, drive a few miles, bail out, hike in, and hopefully the ram was still there.

The trip might have taken 20 minutes, but it seemed like days before Challis parked the truck and we all bailed out. Buddy and Challis sprinted ahead to locate the ram. Brody hiked with me, guiding me in the direction the guys had taken. When we caught up with the guys, they had the ram spotted and a backpack all set up for the shot. I found the ram in my scope, but he was facing me. No shot. Finally, he turned broadside. At the shot, he stumbled. A second shot put him down for good, or at least I thought. “No, don’t!” is what everyone said as the ram kicked one last time and rolled off the ledge for a 500+ foot fall to the bottom of the canyon. We would later discover that the fall broke large chunks off the ends of both horns.

After congrats all around, I suggested that they would need some long ropes to reach the ram. Brody, the organizer that he is, set up his spotting scope at the edge of the canyon next to a flat rock and suggested I have a seat and watch them retrieve the ram. That I did. I watched these three Apache guides climb down the very steep wall of that canyon like it was something they did every day before breakfast. Within two hours, they were back up on flat ground walking towards me with full packs of meat, cape, and horns. Just amazing!

As the plane climbed out of Phoenix and banked east over the mountains, I couldn’t help but think that at 74 years old I would want to stop climbing mountains. Yet, here I was leaving the mountains of Arizona where I had been hunting Rocky Mountain bighorn sheep with the White Mountain Apache Tribe. I probably hiked over a hundred miles searching for a ram. I hunted with three very knowledgeable and helpful Apache guides. Finally, on day 20, a 475-yard shot across a deep canyon echoed over and over, signaling that my quest for the North American Wild Sheep Grand Slam was over.