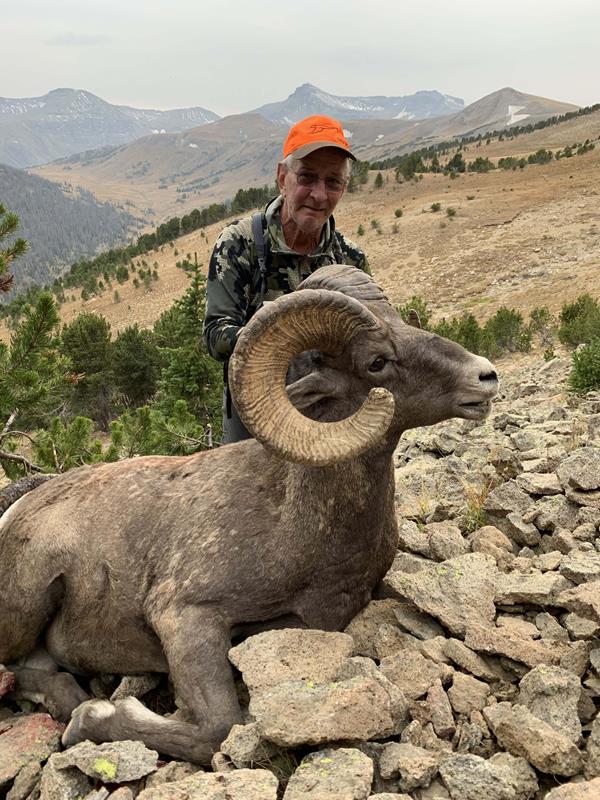 As each new year begins, I realize that I should have started accumulating points in various states much sooner. Accumulating points and planning draws now have to be balanced with increasing age and decreasing physical abilities. Starting the 2020 application process with Wyoming, I was assured of an elk tag since I had maximum points. Receiving a call from outfitter Josh Martoglio asking me if I was ready to go sheep hunting set in motion the plans to do back-to-back sheep and elk hunts. Drawing a unit 4 sheep tag after 21 years and a unit 62 elk tag after 14 years at the same time was a dream come true.

My son, Russell, and I left home in mid-September, and after 21 hours of driving, we arrived in Cody, Wyoming. Meeting up with Josh, his wife, Laci, and guides Kenny and Eduardo, the six of us assembled a 21-head pack string and rode for two days to get where Josh wanted to look for rams. After arriving at our campsite and setting tents up, we started glassing. Within a short time, Josh located nine rams on a mountain two miles from camp. It was decided to go ahead and attempt a stalk on these rams. There were numerous groups of rutting elk around, and one of them spooked our rams just as we got close. The rams split up, and our target ram was relocated on another mountain two miles away after an hour of additional glassing. A hurried stalk was planned, and after a potential disaster with a mule, we found ourselves within 250 yards of our target.

A steady rest over packs lead to one shot to the chest and the bedded ram never moved. He was 10 years old with a 38" long horn and good mass throughout his length. Packing back to the trailhead gave me a week to enjoy the sights and sounds of Cody, Jackson, and Yellowstone.

The second part of this journey began with a three-hour pack to elk camp on the Greybull River. Six hunters packed in on 32 head of horses and mules. Opening day was not without incident as one hunter had to be care flighted back to Cody after a mule accident. However, this did not distract from the camp’s experience as five large, mature bulls were taken on opening day.

Overall, this was a trip for the ages. Taking 21 years to draw a sheep tag and getting to share the experience with my son and also taking 14 years to draw an elk tag and getting dropped in the middle of dozens of rutting bulls, it just doesn’t get any better. Josh and his crew were awesome and totally exceeded their already glowing reputation.

As an addendum, I tested positive for Covid-19 two days after I returned home and spent the next two weeks trying to recover. Everyone, please stay safe.