See You Next Decade! 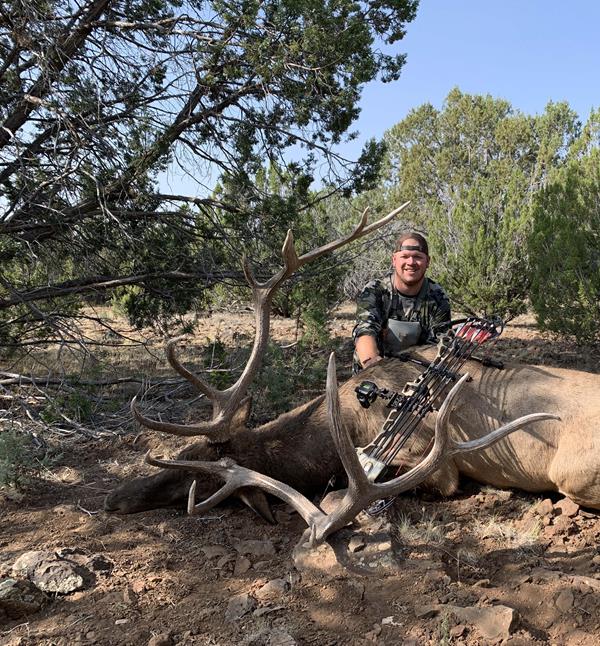 On September 11, 2020, my 10-year streak of waiting for an early archery bull tag in a coveted unit in my home state of Arizona came to an end. I was fortunate to draw the unit 10 tag in Northwest Arizona with 12 points. I found out I drew the tag in late spring and dreamed of bugling bulls for months leading up to September. I was fortunate to tag along in 2019 on the same hunt with my friend, Parker Colburn, who was able to shoot a 390"+ bull. Needless to say, he set a very high bar. Parker’s hunt was awesome. I was able to watch bulls bugle and fight every day on his hunt and that helped grow my anticipation knowing it was my turn to have the premium tag. The early moisture that spring in Arizona had me extremely optimistic that the antler growth would be excellent, and with any amount of late moisture, the rut would be great. Well, the late moisture never came, and this ended up being one of the driest years ever recorded in Arizona. The kicker with unit 10 is that the majority of the unit, you can’t sit water. I had some friends and family suggest turning the tag back in and to live to fight another year, but I was far too stubborn for that!

Fast forward to September 11, 2020. My great friend, Todd Gonzalez, a guide with Pure Addiction Outfitters, and I had been up for a few days and had located a couple good bulls that we knew we wanted to hunt. Overall, we were both sure that the elk numbers were down from the prior year and rutting activity was minimal.
The night before the hunt started, the cavalry showed up. My brother, Will Pyburn, Luke Horak, Justin Jacobson, Chris Jacobson, and Dylan Zylstra came up to glass for us. We made a game plan to hunt a big non-typical bull that we gave a not so politically correct name to.

Opening morning, we passed a few mature bulls that were bugling and had an opportunity at an awesome bull but could not make it happen. My GPS watch logged 17 miles on opening day trying to get on our target bull but to no avail. We knew we were in the right place. The boys had spread out onto a few of the good glassing knobs and had seen some bulls. We went back to camp and shared photos and videos and made our plan for the next day.
Day two, the rut had slowed drastically, and we were unable to find our bull. The bulls in the country decided to be as quiet as church mice. We passed a smaller 6x6 (310-320" type bull) that Todd had called in on the second evening, but other than that, it had taken a total 180 degree turn from our action-packed opening day.

Day five was welcomed with open arms as Todd called in a couple solid bulls that ultimately got a pass at close range. Todd may or may not have had to scare one of the bulls away from me because I thought he was bigger than he was. The prior two days were tough hunting as the bulls had just gone silent. I am not a great elk hunter, or expert hunter for that matter, but in my opinion, the bulls were in survival mode. A lot of dry tanks, bad feed, and high temperatures made for below average rutting activity. We did find pockets of rutting bulls, but the consensus seemed to be that living was more important than rutting. I can’t say I blame them.

Our luck changed in an instant on the seventh morning, although I cannot say it was all luck. I can’t stress enough that the elk hunter in the group was my friend Todd. He had spent 11 days running around the dust bowl with me and created opportunities that I never would have had. Back to the seventh morning. We hunted new country that we were familiar with but had not yet hunted this season. We hiked in and could only hear one bull bugling. We decided to give it a shot and see what kind of bull he was. We had to cover quite a bit of ground that morning.
It seemed like as soon as the sun would start to rise the elk would see how quickly they could run a mile. We caught up to them, and Todd was able to get him fired up enough to come check us out. As soon as I saw the bull, I knew I wanted to shoot him. I could see his long beams and big fourths that canted inward through the trees. Long story short, Todd called the bull in to 27 yards and I shot through a small hole in a cedar tree and was able to put an arrow in him. Todd was able to get everything on video, so we reviewed the tape and decided that my arrow hit a little lower than we would have liked. Todd was optimistic because the bull was quartering away and we knew I stuck the arrow in his far shoulder. We gave the bull an hour and started slowly tracking. Now when I say buckets of blood, I mean football-sized blood puddles that my two-year-old could follow.

We found the bull a few hundred yards away from where I shot him. It was surreal walking up on my bull. Ten years is a long time to wait for a specific hunt, and people wait years to draw the unit 10 tag because it is the land of giants. I did not necessarily care about shooting a “giant.” I have much lower standards than many elk hunters in that unit. What was important to me was trying to kill a big, mature bull that was rutting, and on day seven, my dreams came true. The bull was officially scored at 358 6/8" gross and 346 2/8" net by the Bowhunting in Arizona record book. The bull exceeded my expectations in every way.

I am so grateful to all my friends who came out to camp to hunt with me. There are so many people who gave me a lot of pointers and advice, and I am incredibly grateful. My great friend, Daniel Willett with the Arizona Archery Club, made sure my bow was shooting darts, and my friend, Tyne Heckethorn, owner of Pure Addiction Outfitters, was a great resource. I can’t thank Todd Gonzalez enough. He was up there with me for 11 days straight and was the best hunting buddy through the highs and lows of that hunt.

I was almost not ready to come home knowing it would be a long time before I had the opportunity to have that tag again, but that feeling was quickly overcome by excitement to see my wife, Shannon, and my two-year-old son, Boone. He was bursting with pride to hold the elk antlers in the garage, and it made everything that much sweeter.