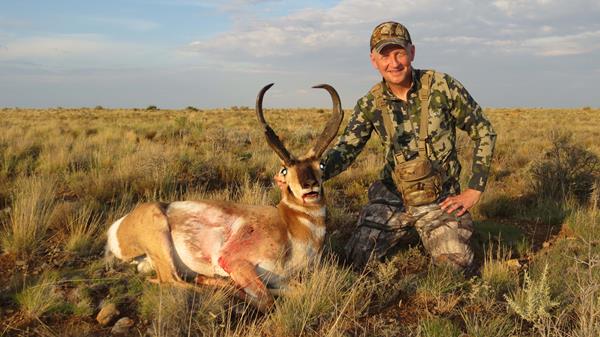 It all started 18 years ago when I started applying in Arizona. Based on the very low non-resident draw odds and subsequent failure to draw any tags, I have been finding it more and more difficult every year to pony up the hunting license cost just to gain points. I applied like usual in 2017, expecting to have a very good chance at a quality archery elk tag. I also put in for antelope in unit 5B as my first choice as a hope and prayer shot. To my surprise, I drew the one random pool tag with “only” 17 points. I realize I was very lucky to draw this tag, but after 18 years of applying, it is really hard to actually say that.

Soon after finding out I had drawn, I called Huntin’ Fool to get previous hunter contact information and also inquired about recommended outfitters. I knew this was a great tag with solid B&C potential if you have the patience. I wanted and needed to consider all my options. After talking with previous hunters and several outfitters, I decided to go guided. I went with High Point Outfitters after Kevin Call suggested I personally talk with who my guide would be, Shane Woodruff. His honesty during our discussion was a huge part of my decision to go guided. The 24-hour each way solo drive was another big influence.

Closer to the hunt, Shane started sending me pictures of potential targets he had scouted and feeling me out on what type of buck I was looking for. One in particular piqued my interest. It was a very massive buck that also had a unique forward slant. I think it was me who eventually started calling him “Mr. Mass” during the hunt.

I flew in on Thursday, the day before the season. Later in the afternoon, I arrived in Flagstaff and proceeded to ensure I could hit a target with Shane’s rifle. He graciously let me use his rifle instead of going through the hassle of the airplane process with my rifle.

Opening day came and went as we proceeded to look for Mr. Mass. He was a timber buck, so Shane warned me it might be hard to locate him. The second morning, we, along with a couple of Shane’s friends, looked for him in the same general area from several different positions. One advantage I noticed about going guided in Arizona with High Point Outfitters is their network of contacts has an exponential increase in knowledge versus one guy. It wasn’t long into the second morning that it was decided we needed to broaden our search for Mr. Mass and look for some of the other target bucks as we may never find the timber ghost.

We drove to another area and ran into a herd of running antelope, which appeared to have a good buck amongst them, coming our way. Out of the truck we went as we tried to cut them off on foot. We accomplished this only to get a glimpse of the buck running through the tree cover. With Shane’s in-depth knowledge of 5B, we got back in the vehicle, drove in the direction the antelope went, and parked to locate them again and perform a stalk. We caught them and looked over the 83-84" buck. I don’t know why, but he didn’t quite trip my trigger. I really struggled with that decision for the next two hours, and Shane commented that I sure had patience. He had no problem with my decision, so that was comforting.

Soon after, we got a call from Shane’s dad, John, who had located Mr. Mass about three miles from where he had been and a couple miles from the nearest road. A quick drive to the location and a stalk ensued. We got as far as we could without being exposed, and Shane ranged him at 460 yards. I proceeded to get a solid prone rest, squeezed, and missed low. I shot again with the same result. Thankfully, Mr. Mass was too busy defending his girls and didn’t run. I told Shane the two shots felt good, so he adjusted the CDS on the Leupold scope to bring it up some. The third shot was right on the mark and put him down in short order.

He was an awesome buck, scoring 91 2/8" SCI, and had incredible mass, which was carried throughout his length. I would like to thank my wife, Barb, for being supportive in my pursuit of my passion. I would also like to thank HPO, especially Shane Woodruff and his dad, John, for making this an awesome adventure.