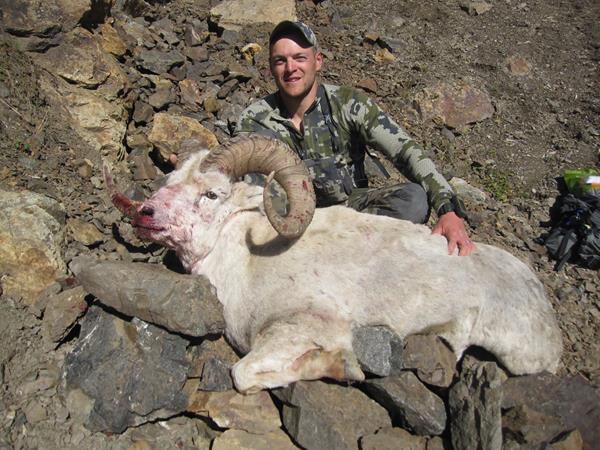 As an Alaska resident for almost 30 years, I’ve been blessed with many opportunities to hunt Dall sheep. Over the years, I’ve been fortunate enough to harvest 10 Dall rams and help friends take several more. The annual self-guided Dall sheep hunt has become our favorite fall endeavor and is not an event to be missed. However, on May 12, 2015, a work-related mishap resulted in me fracturing my spine in two places, cracking a disc, and severely damaging two nerves going into my right leg. I couldn’t walk for three weeks and was out of work for two months. Backpack hunting for sheep was out of the question as was any serious big game hunting that fall. Working hard to rehabilitate after my injuries, I was determined to hunt sheep again the following year.

When August 2016 rolled around, my wife, Gyongyi, and I were more than ready to hunt sheep again. After so many hunts and rams taken, and considering my still-recovering body’s condition, I decided only to pull the trigger on an older, larger ram. Gyongyi and I hunted hard for 10 days, and I snuck on several different trams. Although a couple of the rams were legal, they were not of the age and trophy class I wanted. It was a great hunt, but we went home empty-handed because of my selectivity.

This is where my friend, Travis Skogstad, comes in. Although Travis is a lifelong Alaskan and experienced hunter, he had never hunted sheep before 2014. Travis has a great attitude and is young and fit, and with so much less experience hunting sheep, I knew he would be happy with one of the rams I had passed on. Just one week after returning from the 10-day hunt with my wife, Travis and I made the long drive back to our trailhead arriving at 10 p.m.

Hiking in the dark with headlamps, we punched in three miles that night before pitching the tents. The next day was spent covering the remaining nine miles to our planned location for hunt camp. Just as when Gyongyi and I had hiked in almost three weeks before, numerous animals, including huge bull moose, caribou, and sheep, were spotted.

Our first hunt day, we walked 15 miles, spotted two monster grizzlies, and even saw a legal ram perched on top of an unhuntable peak. Golden eagles, caribou, marmots, and ground squirrels were also seen. That night, Travis and I were treated to a spectacular display of the northern lights. The magical aurora borealis is beyond description, and that was the first of several amazing shows Travis and I witnessed that week.

On hunt day two, another in a string of perfect weather days, we decided to walk about eight miles to a saddle on the back ridge of the valley. At about 1 p.m., while stopped for lunch, I noticed a sheep about 2,000 feet above us on the opposite mountain. A look through the spotter revealed an eight-year-old full curl ram. While it wasn’t the ancient bruiser I was after, Travis was keen to attempt a stalk.

After finishing lunch and planning the sneak, Travis was on his way, with me staying low to signal him if needed. Bedded in a steep cut with a smaller buddy, the ram’s view was limited as Travis made the long circle up and around the mountain. Mindful of wind and cover, Travis worked his way to within 153 yards of the unsuspecting sheep in a little less than two hours.

At 3:27 p.m., the report of Travis’ custom Mark Bansner 7mm echoed through the valley and the ram rolled into the heart of the chute. Seventy minutes later, I reached Travis and his ram, which was a 36” eight-year-old with relatively heavy bases at 13 ½”. Photos, caping, and butchering were challenging because of the steep, confined terrain, but it was a beautiful afternoon and we welcomed the task.  Travis was very happy with his ram, and the joy and contentment I felt from lending a hand was just as special as it would have been had I pulled the trigger myself.

By 7:30 p.m., we were headed down the mountain, and by 1 .a.m, we were back in camp. Completely exhausted but very happy, we quickly prepared a Mountain House dinner under the shimmering aurora, ate, and then crawled into the sleeping bags. The next day, we relaxed in the sun, worked on the cape and meat, and feasted on sheep ribs and tenderloin. The great weather, abundant wildlife, northern lights, and relative ease with which Travis took his ram combined together to make this hunt as enjoyable as possible.

We spent two more days hunting a monster ram for me before hiking out. More legal rams were spotted, just not the ram of my dreams. Regardless, Travis had fairly and cleanly taken his second Dall ram, and that was more than enough. As we reached the trailhead and civilization, we agreed the last week had been something special. Those beautiful days and nights in Alaska’s glorious sheep country will always be treasured as some of the best of our lives.