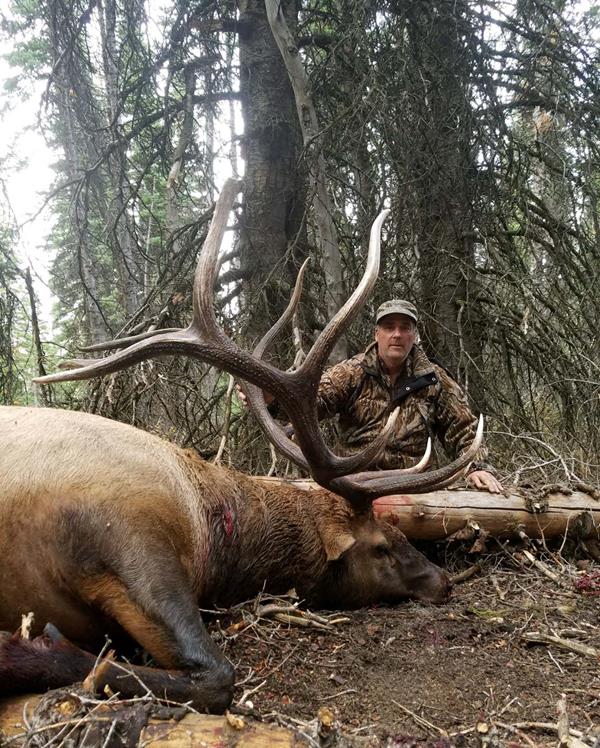 Ever since the first time my dad took me hunting, I was hooked. I loved challenges, and hunting was just that. Big bull elk is one of those challenges that has been a lot of fun over the years.

Late one night in July 2017 at about 11:30, I came in from harvest on my farm and read an email from Huntin’ Fool. I got a weird feeling as it stated that I was one of six finalists for the grand prize drawing of the large truck camper. It sounded legit, so I gave them a call in the morning, and sure enough, it was legit. What were the chances to win it all? A lot of luck. They offered to fly me to Utah for the drawing where we met at the Huntin’ Fool office on July 26th. They put on a great BBQ, and I got to meet a lot of the great Huntin’ Fool staff. And yes, I was drawn for the big grand prize. How lucky can someone be? Thank you, Huntin’ Fool! Little did I know that this was just the beginning of a great year.

July 31st, our married son and his wife had a baby boy (Cooper), which was our first grandchild. He was scheduled to be born the day before I flew to Utah for the drawing, but it didn’t happen. Somehow he waited to be born until I got back and our family could all celebrate together. How blessed can a family be with this new addition to our family?

My only good tag this year was a muzzleloader elk tag in Nevada, and I was excited. I had been in the unit before, helping a friend, so I somewhat knew the area and what to expect. The first couple of days, we saw a fair number of bulls but were hoping for something bigger. On day three, my partner, Darrel, spotted a big bull right at dark, so we made plans for the morning. However, a couple of other hunters were already after that bull, so I just watched as the bull got nervous, gathered his cows, and left.

On day four, we split up again, trying to find the big bull, but nothing. Meeting up at mid-morning, we spotted a decent bull with his cows on another hill, so we went around the ridge to try and get a better look but no luck. We continued on to where we could do some glassing. As we looked in the opposite direction on a far ridge, a bull was walking, just ready to go in the timber. Through our spotting scopes, all we could say was, “Wow, he’s big!” His tops were what stood out as he crossed the ridge and went into the timber where we hoped he would bed for the day. We started to move in the direction of the bull, but the wind was bad, so we stayed put. It also started to rain, so we decided to give it a rest and wait for the wind to settle.

At about 3:30, we hiked in above him to see if we could spot him. As we got above the finger ridge where he was in the morning, we looked down and across the canyon and there he was, walking straight away on an open hillside. He was 50 yards from entering some trees and brush. We were that close to missing seeing him. Darrel gave a cow call, and it didn’t seem like he even heard it. He was 1,300 yards away. Darrel called again loudly through the grunt tube, and the bull stopped and turned to look. As he called again, the bull turned and started walking fast straight toward us. We realized this could happen fairly quickly. I went as fast as I could down the ridge a bit where to my left was the meadow that I was sure the bull had crossed into that morning. I found a good spot to set up while Darrel was calling from 70 yards behind me. A couple of cows came around the ridge and passed 30 yards in front of me, so I knew the wind was good. After what seemed like only a few minutes or so, the big bull walked out. As he came closer, he turned broadside. At 140 yards, I fired but missed. Unknown to me, Darrel had moved to where he could see everything, and when the elk bolted to run, he gave him another call and stopped him. Trying to reload a muzzleloader sideways so the bull wouldn’t see was challenging, but I got it reloaded and this time my shot was good. He stumbled and then ran. After a bit, we heard a loud crash. There was a good blood trail that led us right to him.

He was everything I could have imagined and dreamed about. We savored the moment and took a lot of pictures before we started the work of skinning and caping. This bull scored 388 3/8". What were the chances of getting a second shot with a muzzleloader? I am extremely blessed.

Fast forward a month to the middle of October. As I was harvesting hazelnuts, I got a text from Darrel of a video and a picture of a Roosevelt bull close to his home. Darrel and his brother, Daniel, had spotted a good bull while blacktail hunting, but they didn’t have elk tags for this upcoming season. Even though I was in the middle of harvesting, I couldn’t pass up an opportunity to hunt a good bull.

Friday evening as I was still on the tractor, they were out looking for the bull so we could make a plan for opening morning. I didn’t know until the next morning that Daniel had glassed up a huge bull right before dark about two miles away. Our plans changed, and we went after the bigger bull. By daylight, he had moved to the top and up the ridge a ways from the night before. As we worked our way around the ridge, we spotted the cows first. At 325 yards, it didn’t take long to find the bull. I crawled to a stump for a solid rest and could barely see his horns and part of his shoulder. The shot was good, and as the bull turned to run toward me, I put another one in his chest. He was down for good.

Walking up to the bull, we didn’t realize how big he was because he had fallen in some brush and part of him was hidden. As we cleared the brush away, we began to realize what we actually had. He was a real trophy. We took a lot of pictures amidst the celebration. The bull scored 369 4/8".

A big thank you to Daniel and Darrel for helping me on a once-in-a-lifetime bull that they had only found the night before season. In an open tag area, what were the chances that we pulled this off without interference from other hunters? I am very thankful to God for good friends, family, health, and, most of all, for my wife who supports my hunting endeavors. It has truly been an incredible year!