Monster Elk in the Velvet 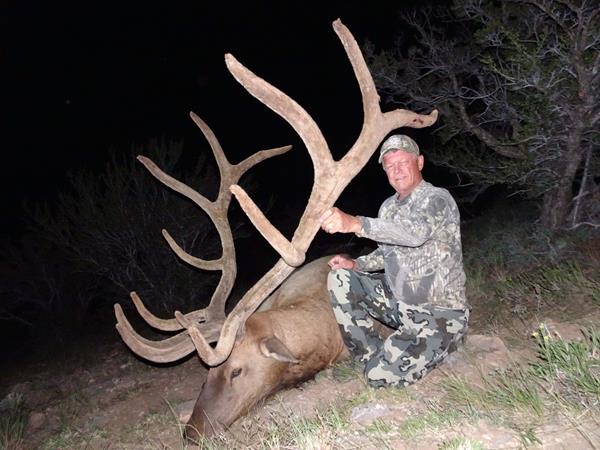 May 26, 2017 was an ordinary day. I was working in our garden when my cell phone rang. I dropped my gloves and answered it. “Hi, this is Chad Bliss with the Nevada Department of Wildlife. You are a lucky guy. About 30 minutes ago, your name was drawn for the Nevada Silver State elk tag, the most sought-after elk tag in the country.” I had forgotten that Huntin’ Fool had put me in for this drawing.

Not 30 minutes after talking with Chad, the phone rang again. It was Jeff Warren from Huntin’ Fool, the company that processes all of my non-resident special tag applications. “You are lucky today,” he started out. I let him go on for a bit explaining the details of the drawing before telling him that he was the second person to call to congratulate me on the tag draw. I thanked him profusely for including the Silver State Tag application with my other applications.

This drawing outcome took me by surprise. I had zero knowledge about Nevada elk hunting areas and would need a guide service to have a successful hunt and experience. I wasted no time in contacting references for a reputable outfitter. One old-time, retired outfitter in Nevada offered that if he had my tag he would book the hunt with Chuck Marques of Bull Ridge Guide Services out of Ely, Nevada.

I contacted Chuck Marques right away and visited with him and his son, Trevor, several times by phone. I was convinced they were right for me. Trevor started sending me photos of elk they had found in their scouting trips. I was impressed. These bulls were large already but still growing antlers with a month or two more growing time before August 1st.

I met Chuck and Trevor on August 1st and made plans for the next day. We would be hunting about an hour and a half out of Ely on public lands. I rode with Chuck, and Trevor and his nephew, Austin, took another vehicle. Chuck and I busted several elk out of the draw near the road, all 6-point bulls but too small. We parked the truck and walked to the ridgetop to glass. We started glassing, and a group of elk came waltzing down the bottom of the canyon floor. We counted eight bulls but no shooters.

As the morning wore on, we glassed the opposite canyon hillside. Near the ridgetop, four elk appeared, but we didn’t get a good look at all of them as they disappeared near the top of the mountain. It was warm and game movement seemed to stop at about 10:00 a.m., so we returned to town. After lunch, we returned to the same area. Trevor and Chuck were convinced the large bulls they had seen when scouting were living between water springs in these drainages.

After reaching a ridgetop opposite of where Chuck and I had started the morning hunt, spotting scopes were set up and the search process began. Trevor wandered down the ridge about 200 yards to get a different view. After about 20 minutes, Trevor came rushing up the road and said, “Let’s go, I found the one we want!”

With the prospect of seeing a monster bull, adrenaline kicked in and my 74-year-old body stayed right behind Trevor with Chuck right behind me. As we approached the top of the ridge across from where the bull was last seen, I was gasping for air and started lagging behind. Finally, it leveled off. We caught up to Trevor as he was setting up his spotting scope. There were three pairs of binoculars scanning the canyon wall near the large rock outcropping.

Suddenly, Chuck blurted out, “Is that him standing on the upper edge of that large, flat rock?”

Chuck now had his spotting scope on the bull. Trevor and I rushed over to the right to find a log to use as a rest. We found an open spot, and I flopped to the ground in prone position to make a shot. “He’s 609 yards,” Trevor reported. I had the crosshairs of the scope just behind the shoulder. I took the shot. Dust erupted just left and high from where the bull was standing. The bull just stood there. Trevor barked to take another shot. I put the crosshairs right of the shoulder as the bull was standing broadside, facing left. The rifle slammed into my shoulder as the bullet echoed across the canyon. Finally, that sweet “whop” sound reverberated back across the canyon.

The bull hunched up his front shoulder and took two labored steps behind a juniper. Looking through my binoculars, I could see his horns above the juniper. He was standing perfectly still. Suddenly, the bull went down, lying under the juniper with this head up. Trevor motioned me forward as we quickly moved down into the canyon to get a closer vantage point. We were 300 yards away, looking up at the bull. He stood up and then immediately went back down with his head still up. I had the crosshairs right on his chest, and I was going to finish him. At the crack of the rifle, his head dropped to the ground and he rolled downhill where he hung up on a cedar tree.

We were all ecstatic and thankful we had closed the deal. I came huffing and puffing up the hill 30 feet behind Trevor, eager to see the grounded treasure. I was speechless. I have hunted elk over 56 years and had never seen a bull like this anywhere. The bull was stuck under a cedar tree branch. We carefully got the horns loose without tearing the velvet, which was in perfect condition.

Chuck, Trevor, and the whole guide crew were fantastic and worked hard to bring this unforgettable hunt to a successful conclusion. The bull unofficially green scored 417" B&C. I never dreamed that I would ever have a chance at such a magnificent bull.