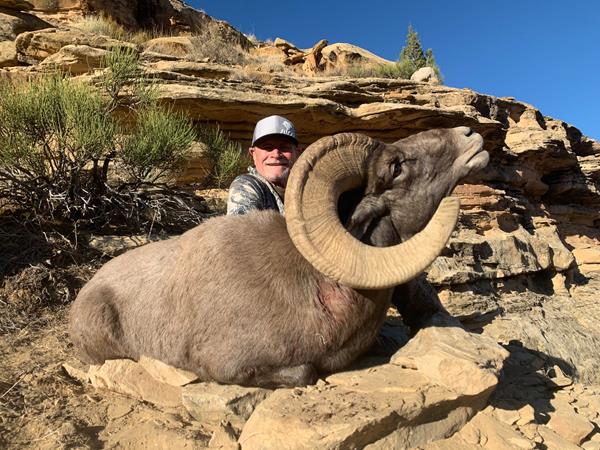 In April, I was lucky enough to get this tag through the Utah Wild Sheep auction. I engaged Wade Lemon Hunting to guide me in the event I was successful, and after the award of the tag, we started making plans for the hunt.

Opening day was November 30th, so I drove up late on November 29th to get ready to hunt. My guides, Brandon Barney and Manny Burns, and I scouted our area and spotted my sheep. He was in a steep, remote canyon with several ewes. We watched him until dark and then returned to camp. The next morning, we left camp very early and met two friends, Brian Thomsen and Jesse Rawle, at our parking area. Manny and Brian were spotting from the cliffs above while Brandon, Jesse, and I walked up the canyon from the bottom to get below where we left the ram. Sure enough, as soon as daylight broke, there he was, right where we left him. Once he stood up at 440 yards uphill, I put one in him with my Banzner .300 WSM. He went down immediately on a cliff straight up the canyon wall. After an hour or two of hiking, we finally reached him. Jesse filmed the whole thing from start to finish with his video equipment. This was a hunt-of-a-lifetime six days after my 71st birthday.

I want to thank GSCO, Austin Atkinson with Huntin’ Fool, Wade and Kalan Lemon, Utah Wild Sheep Foundation, Brandon, Manny, Brian, Jesse, and most of all, my wife.