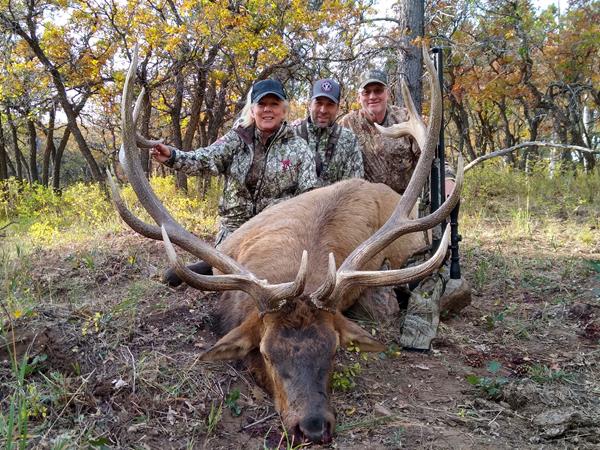 It was time to put in for the Utah hunts, and with my mom having 23 points for elk, we convinced her to put in for muzzleloader instead of rifle. When the results were posted, we were thrilled that we would not only have the opportunity to hunt elk but also Desert bighorn sheep, which my dad had drawn with 23 points, and mountain goat that my brother-in- law, Andrew, drew.

September 19th finally rolled around, and my mom and I were excited to head down with our good friend, Chris, to meet my dad who had gone down early and set up camp with another family friend, Roger. We hunted for a few days and saw a few 300-330" class bulls. On Tuesday morning as it was getting light, we heard a bugle not far off the road. My mom and I jumped out of the Jeep and started moving that direction. As we were working our way up an old cattle road, we heard another bugle not too far off in the distance to our south then another to our north and another and another. Before too long, I could see the elk funneling through the pines and brush on both sides of us. We continued to press on without being seen and watched as the two herds came together with a third in front of us in a small meadow. The earth was shaking and flying up in the air as the bigger bulls were crashing together.

The war moved from the meadow into the pines and brush. We continued to move with the now giant herd and watched patiently for the opportunity at a great bull. I was able to catch a few looks at a bull that had some impressive mass on the back end with dark horns. He had a really low, raspy growl to his bugle, which helped me give him the name “Ron White” after the comedian. There was another bull with light horns and good width, but it was too difficult to get a good look with all the movement and chaos going on.

The herd began to break off, going in every direction. One group ran through a large open area with staggered pines. I could see the large bull with massive back ends and determined he was a shooter. We jumped up and worked our way quickly to get in front of them for a shot, but they were too fast and worked their way out of muzzleloader range. Within moments, the storm had passed and the quiet stillness set in.

We hunted several more days, but we were unable to turn up the raspy growler Ron White. Early Saturday morning, Chris, Mom, and I headed out. We pulled up to the Kelly hump in the road, parked the Jeep, and proceeded to get out. As I was putting on my backpack, I heard a close growl of a bugle and thought that could be him. We walked back up the main road and then dove off into the pines towards the direction we had last heard him. We walked quietly and slowly, not wanting to spook him. I stopped to listen for a second, and he let out his chain smoker bugle right in front of us just as it was starting to get light. The bull worked his way towards us and stopped. Chris and I could immediately tell he was a shooter. I handed the CVA Accura to my mom, and she got in optimal shooting position. The bull started to walk away, so I hit the hoochie call that stopped him broadside, looking in our direction. The shot rang out, and then the hustle kicked in. We could no longer see the bull, so we sat and waited for about 30 minutes. We started making our way in the direction he had gone, and within moments, I could see him. The bull had not gone 40 yards and was piled up. I watched as my mom was able to see him, and the emotions of excitement and joy took over. There was no doubt we had found Mr. Raspy Growler Ron White with his dark horns and massive width on the back end. I’m proud of my mom’s grit and determination on this hunt and the moments we shared that will last a lifetime.

My dad finally drew the Utah Desert bighorn sheep tag after 24 years of being diligent and dedicated. He had made a few calls to the local biologist and friends for intel on the unit about where the best spots might be to start looking. My sister and dad made their way down to their initial area towards the beginning of October to scout and hopefully find a few good rams. I followed Chris and Craig down. Craig had previously drawn a Desert ram tag and was familiar with the area. When we arrived, my dad and sister told us about the cool rams they had spotted the first morning out and had watched for three days straight. They named them “Full- Price” for his heavy curl and “Red Tag Special” or “Clearance” since he had an obvious red tag in his ear with the number 54.

The next morning, we made our way up the bottom of some rugged terrain. We decided to walk along the ridge of a deep canyon where Chris and Craig had spotted a good ram, but before we could get a better look, they must have spotted us and took off. All we could do was watch the cloud of dust at 1,000 yards across the ravine. We went back to camp and decided to regroup and have lunch.

That evening, we headed up the canyon in hopes that we could locate Red Tag Special. My dad was on the four-wheeler about five minutes ahead of us, so when we saw he was stopped and had his gun out, we knew something serious was about to happen. The sheep were up about 300 yards just off the top and Red Tag Special was looking down on us. My dad said he was going to shoot and followed up with a bang. I could see that he hit just above him, and they started to bolt for safety. Another shot rang out, but it was another miss. Red Tag Special was on a full sprint and seconds from disappearing. A desperate final shot rang out, and with that, they were gone. In all my years, I could not recall a memory of my dad’s missing, but I guess this just meant he’s human.

My sister had filmed what she could, and we noticed on the final shot that just before he went over the ridge, he did a funky kick with his back legs. After some discussion, my dad hiked up and was able to locate a steady blood trail and eventually his prize piled up not far from where we last saw him. We were all so excited to get our hands on this amazing creature and elated for my dad to have fulfilled half of the Grand Slam.

My brother-in-law, Andrew, drew the Wasatch moose tag last year with only 6 points where he killed a nice bull and decided to put in for mountain goat on Box Elder Peak where there are only two tags given. He was standing next to my brother and me on a hillside glassing for bear when he found out and said casually to Trevor who has never drawn a once-in-a-lifetime tag and has 24 points on bison, “Guess I get to hunt mountain goats this year.” Maybe it’s his first name An“drew.”

Andrew waited patiently for my mom’s elk hunt and my dad’s sheep hunt to finish and was excited to go after the majestic billy goat, but his luck would turn just a bit as my dad and I came down with COVID shortly after the sheep hunt. He had until the end of November, and we just needed the weather to hold off since snow can be a man’s worst enemy on a goat hunt. After several weeks of waiting, my dad and I were still feeling the effects of COVID and were in no shape to go on a death march up Box Elder. He was able to recruit his dad, brother, and my sister, Candise, who gained some good experience on my mountain goat hunt the year before.

They left early one November morning. making their seemingly endless hike to the top on a surprisingly warm day. They took their time and methodically made their way up through the ledges. As they approached the top, they spotted two good goats. The wind was blowing hard, and Andrew wanted to make sure he made a good shot. As they moved in closer, they took notice and moved quickly around the hillside and out of sight. After catching their breath and coming up with another game plan, they made it over to where they had last seen them and were able to locate a small herd of kids and nannies that also held two billies. Andrew picked out his super fluffy billy and connected on the second shot.