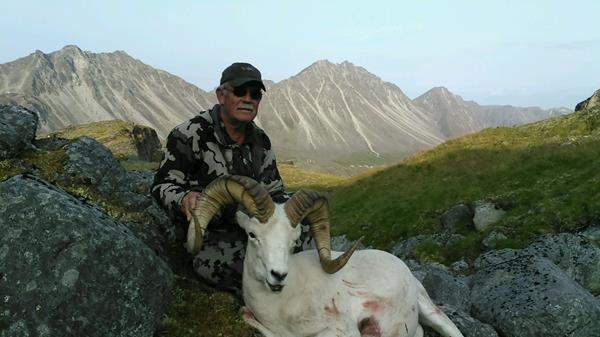 My Alaska adventures began in the fall of 2014 while hunting moose in the Talkeetnas with Alaska Frontier Guides owned by Ben Stevenson and Travis Prezbinbowski as my guide. It was August, and the hills were rife with berry bushes. We grazed on delicious berries while hunting moose. I harvested a 60" moose with exceptional brows, and I saw caribou and Dall sheep, creating a strong desire to hunt a Dall. Watching them in the places they call home can be intimidating to two-legged creatures. However, I decided I needed to get in sheep shape and start saving dollars to make it possible.

Next was a brown bear hunt in October of 2015 on the Alaskan Peninsula. I found myself looking through the scope of a .375 Ruger mag at a 9' brown bear. With a bear in the bag, I flew to Cordova, Alaska to hunt mountain goat with Ben. This was a successful one-day hunt, as in all you have to do is get to them. It seems that if you can climb straight up all day long in the rain and make the shot you can claim a goat. Once again, I would see my dream animal on the flight in and out of goat camp – Dall sheep.

I have been a member of Huntin’ Fool for several years and also take advantage of their License Application Service. With a desire to hunt caribou, I had Huntin’ Fool apply me for the Talkeetna unit. With Alaska’s no preference point system and knowing hunters who have applied for years without success, I wasn’t very confident. I’d hunt Dall sheep when I didn’t draw caribou. However, I drew a caribou tag. With a rare caribou tag, I decided this would have to be my focus and then if time allowed I’d hunt over-the-counter Dall sheep.

Since the unit is only accessible by aircraft, I booked the hunt with Ben. He would be the pilot and guide on this hunt. With caribou everywhere, Ben landed and said, “We have an airplane, 100 square miles, and 10 days, so we won’t shoot the first caribou we see.” Apparently, he was unaware that the first morning we would see seven caribou bulls half a mile away with two of them being shooters. After a short stalk and a brief argument over which one, I wanted the big-bodied, white-maned one. Ben said the one on the right was the one I wanted. Remembering don’t guide the guide, I surrendered and shot the one on the right. He ended up being 404" of Barren-Ground caribou. Good choice.

With another nine days to hunt, we flew the meat to town the next day and picked up an over-the-counter sheep tag. After three days of being weathered in, the rain finally let us fly out to chase sheep.

A couple days later, we found a legal sheep. However, with him not having the “Wow!” factor, there being a four-year waiting period upon harvesting a sheep, and me being 60 years young, I found the courage to pass. I would second guess that decision for the next two years.

With all the taxidermy fees and after waiting a year, I was eligible to apply for caribou again in 2019. When I booked a Dall sheep and caribou hunt with Ben and Travis for 2019, they dismissed caribou as I would never draw it again so soon.

August 8, 2019, I met Travis at DIA for our flight to Anchorage to hunt Dall sheep, and you guessed it, with another caribou tag in my pocket. After some airline delays, we arrived in Anchorage that evening. Ben’s wife, Dawn, picked us up and drove us to Talkeetna where Ben was waiting at his plane. Running out of daylight, Travis jumped in the plane and they were off. My doubt of making camp this evening diminished when Ben landed and said, “Hurry up, get in.”

I thought he was kidding when he said we would land on a glacier. When he landed on the moonlit glacier surrounded by vertical cliffs, I asked him where were we supposed to camp. He said, “Right here. It’ll be fun.” It was a cool experience, that’s for sure.

Travis and I spent the day before season scouting for sheep. With no sheep spotted, we dug trenches to keep the afternoon glacier melt from turning our tent into a swimming pool.

Opening morning at 4:00 a.m., we began an hour-long slide off of an ice cube. That afternoon melt becomes a sheet of ice at night. Once on dry ground, we climbed a couple of ridges and saw a lone ram crossing a valley about 500 yards below us. Travis was on the spotter when the ram paused for a drink and he announced, “We have to go.” An hour later, we found the ram again and Travis said, “200 yards, shoot that ram.” Foolishly, I asked if he was legal. Again, I heard, “Shoot that ram.”

With that, I hurried the best I could ever imagine, and in all that haste, I completely missed the ram of my dreams. With the ram looking for a new zip code, my next opportunity would be 400 yards. Being confident in the shot, it didn’t help anything when we didn’t see red on the white sheep as it disappeared over a ridge. When we climbed to where we last saw the ram and not finding any blood, it was really discouraging. After advancing another couple hundred yards and seeing the ram piled up in a small ravine, disappointment was replaced with a sense of accomplishment.

It truly was a surreal experience to walk up and put my hands on 39" of Dall sheep. This ram definitely possessed the “Wow!” factor. After taking some pictures, we skinned the ram for a full body mount and loaded the head and hide in my pack and all of the deboned meat in Travis’ pack and began the dreaded climb back to camp while wondering how in the world we would be able to climb the glacier with loaded packs. Right on schedule, the rain started, and by the time we reached the glacier, the rain had softened the ice just enough that we were able to climb it without too much trouble.

After a cool night’s sleep, a text on the inReach resulted in Ben flying in the next day to transfer us to caribou camp, which resembled a golf course compared to the glacier. Since you can’t hunt the day you fly, we spent the day enjoying the beautiful country.

The next morning, we went out in search of caribou, and although we saw many bulls, we didn’t see anything we wanted to chase. That afternoon while glassing for caribou, Travis found a dead sheep head across a valley. We think it was a wolf kill because all that was left were the horns and a pile of wolf scat. With the horns loaded, we returned to camp only to find a velvet bull one mile south of camp. I decided with caribou everywhere and still seven days to hunt we would simply find him in the morning.

When we located him the next morning, he was only four miles away and as high as he could go. After a long hike and short stalk, I found myself wishing I had my bow. The bull was 39 yards away and completely unaware that we were there.

After some pictures, we loaded up the meat and cape in the rain. About halfway back to camp, we found a suitable landing strip. Another text to Ben and he flew in to pick up the meat. Travis and I stayed as we still had five days to try and fill my grizzly tag. The only bears we saw would be a sow and three cubs a couple hundred yards from camp. Now my excuse to go back is to add a grizzly to my Alaskan adventures.

All of my Alaska hunts have been filled with adventure. Each hunt unique in its own way with an experience to last a lifetime. However, a Dall sheep hunt was such a tremendous opportunity in many ways but also addictive. I patiently await a bighorn or a Desert sheep tag someday while I dream of a Stone sheep. With Huntin’ Fool applying me in the states that present the opportunity for sheep tags, one day I will see “Successful.”

I highly recommend Alaska Frontier Guides for any Alaska adventure you may be interested in. I cherish the friendships created and trophies harvested with Travis and Ben.