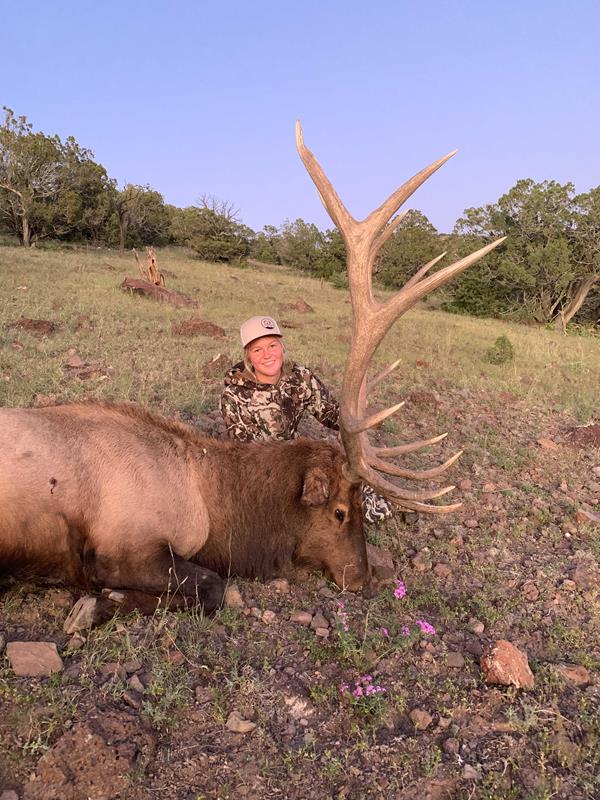 As the temperature dropped with the sun, the bugles began to return. Shortly, a beautiful, symmetrical bull was spotted over a mile away and up the mountain directly across from us. He was alone; his cows had fallen behind. It was after seeing that he was alone that we knew we had to go after this bull. As we jogged a mile across the valley floor to the base of the mountain, my nerves were higher than ever. As we reached the base of the mountain, we dropped to the ground and began to belly crawl between trees. The bull was in our vision, and he too was meandering between the trees. We crawled out from the trees, and I set up to take a shot. The bull was in my crosshairs, and as I began to breathe, he stepped forward and behind a tree. I crawled in the same direction that the bull stepped and set up for a shot again. I aligned my crosshairs on an opening directly in front of him. As I lifted the gun up to my eye, excitement, thrill, and fear rushed through my body. I centered myself by taking a hefty, deep breath.

Immediately after firing the muzzleloader, my vision was obscured by a thick cloud of smoke. I knew that when taking the shot I was steady on the gun. My shot felt strong. My feelings about the shot were soon proved to be true as we watched the bull drop his head and bed down.

I would like to thank G3 Outfitters for bringing me unbelievable experiences. Thank you to Spencer Burns and Preston Price for making everything happen the way it did. You truly made the hunt beyond special. Thank you to Piper Reed for inspiring me to be the girl that I am today. And finally, thank you to my dad for being my everyday inspiration, laughter, and motivation. I love you.