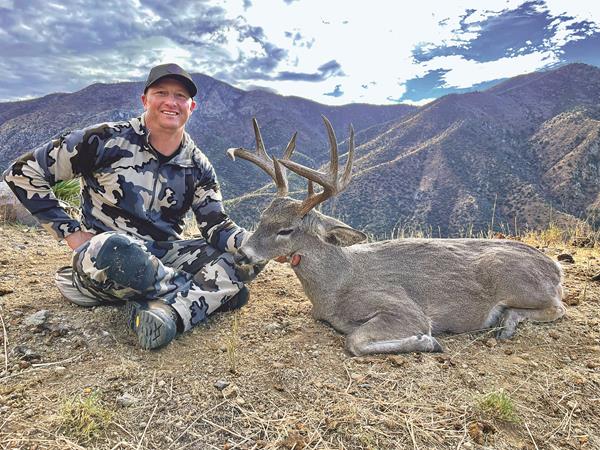 For the last 10 years, Coues deer have been at the front of all my hunting plans. As a native of Utah, a Coues deer is not an animal that I grew up hunting, and quite frankly, I snubbed my nose at them for their small bodies and horns. In my youth, I frequently compared them to mule deer and thought, “Why would I want to hunt those little guys when I can hunt mule deer?”

In my late 20s, a group of friends and I began archery hunting javelina and Coues deer every January in Arizona. I can still remember sitting on a rocky cactus hillside with Steve Barker and Garth Jenson as Garth spotted the first Coues I’d ever seen. Being an avid glasser and priding myself on my ability to find animals, it took me 10 minutes to find the deer that Garth had spotted. I was instantly intrigued with the challenge and started to fall in love with the dream of harvesting a trophy class Coues buck. For the next decade, we chased javelina and Coues with our bows. We tagged out on javelina, but in the last 11 years, I have only harvested one small Coues buck with my bow. After gaining a Coues education year after year, my desire to harvest a trophy class buck grew.

Fast forward to a roadless mule deer hunt in 2020. My steady hunting partner, Garth Jenson, had invited Chad Rhoton and his kids to join us in camp. We would hunt hard all day, and when we got back to our tents each night, I would quiz Chad on Arizona Coues deer. I would ask him about the best units, best habitat, best times to hunt, etc. Chad is a fountain of knowledge and a part owner of A3 Trophy Hunts in Arizona. A3 has a strong reputation of getting their clients on the baddest Arizona big game animals. As you can imagine, I talked Chad’s ear off along with his son, Tate, and daughter, Olivia. As we finished up an unbelievably successful mule deer hunt, my mind was already racing to Coues deer in 2021.

Once I returned home, I called up a good friend, Steve Barker, and let him know I would be dropping my 14 deer points in Arizona to chase Coues. I knew he had about the same amount of points and hoped he would join me on the hunt. We decided to put in as a party in two predetermined units that would give us the dates we wanted along with the opportunity at the quality of bucks we were seeking.

As planned, Steve and I drew Coues tags for Arizona in a premier unit. I am typically a self-guided guy mostly due to budget restraints, but there was no way I was going to go cheap on this tag. I instantly called Chad and let him know both Steve and I drew and we wanted the best guide on his team. Chad assured me he had us covered and would be partnering us with Kory Wynne and Bobby Stringfellow. We were pumped!

As Chad made introductions and I began to talk with Kory about what to expect on this hunt, Kory asked me what size of buck I was looking for. After having the opportunity to ponder this question for over a decade, I instantly replied, “I don’t care about score. I want something that’s massive and has the look.” I believe Kory was a little confused with how fast and intently I answered the question, but in my mind, I knew exactly what I was looking for and I was willing to eat a tag to find it.

Fast forward to the hunt. We talked long and hard about strategy. We had multiple options open to us. We could sleep at a hotel, set up a base camp, and backpack in, or we could live like dirt bags sleeping by our truck, using the tailgate as a table, and scouring the unit looking for the right buck. We opted to live like dirt bags, and that’s exactly what we did. Not once did we sleep in a tent or a hotel. Instead, I slept on a cot by the tailgate and Steve slept in his truck. We moved all through the unit, typically hitting a trailhead two hours before light and walking out in the dark. I won’t bore you with the details, but I’ve hunted a lot of the last 20 years and this hunt ranks top 5 in physicality.

We looked over a pile of deer. Many days we would see 50-70 deer. We saw a lot of great bucks. We would glass and move all day long. Finally, on the firth day of the hunt, we had been glassing all morning and had passed on a solid 100" buck that had a cool split on his G3 and a small dropper on his right main beam. We decided it was time to move. We packed up and headed up the canyon a mile and jumped up on a vantage point that gave us a solid view of a large, remote canyon.

While everyone started glassing across the canyon to our north, I decided to glass close to our glassing point specifically looking into the northeast pockets of the mountain. After 10 minutes, I picked up a small buck that stood up and started feeding. It was 2 p.m. and our hope was to pick up deer as they stood up to switch beds. We continued to glass, and after about 20 minutes, I picked up a heavy antler as a buck rotated his head from where he was bedded. I just caught a glimpse, but I knew what I saw in the glass was special. I quickly signaled to Bobby and Kory that I had seen a large antler for a split second but that the buck was bedded and I didn’t have a visual.

Bobby and I began to pick apart the thick hillside where the buck was. After 10 minutes, Bobby whispered, “I can see his right side, and he’s really heavy. I don’t see the other side, but you need to get on the gun.” Knowing what I saw on the left side and what Bobby saw on the right side, I knew I was going to sling lead when this guy stood up. Steve and I quickly jumped behind our guns to set up for the 415-yard shot. No sooner were we behind the guns than the buck stood up and started to stretch. I could feel the adrenaline pump. I quickly squeezed the trigger, jerking it. Luckily for me, the gun was still on safety and I had time to recover. I switched the safety off, took a deep breath, and lightly pulled the trigger. Instantly, I heard Steve say, “He’s hit but still up! Get another one in him.” Frantically, I reloaded, settled the crosshairs, and fired a second shot, dropping the buck.

Everything happened so fast that no one knew exactly what had happened. I looked at Kory and Bobby and asked what they thought. Kory nervously looked at me and said, “I never got a look at the buck. I honestly don’t know what he is.” However, in my mind, I knew exactly what he was, and my dream had just come true. Bobby and I quickly made our way to the buck as Steve was setting up for a shot on another buck across the canyon. Bobby was first to the deer, and I watched as his jaw dropped. He looked at me, then at the deer, and then back to me. As I walked up, Bobby reached out his hand to shake mine and said, “I want to be the first to congratulate you on killing a world-class Coues deer.”

There was a lot that went into this hunt. For many people, burning 14 years’ worth of deer points on a Coues hunt is crazy, but I have zero regrets. This wouldn’t have happened without the knowledge and passion that Kory, Bobby, Chad, and the A3 team brought to the table. Kory never complained as we hiked countless miles every day, passing on very respectable deer. Most of all, Steve Barker is a true friend. We have hunted all across the West together, and this Arizona hunt was as tough as any. His positive attitude and willingness to go wherever and whenever is something I will never forget, and I owe him a great debt. My buck was green scored in the mid 120s with over 38" of mass. A true Arizona dream come true!