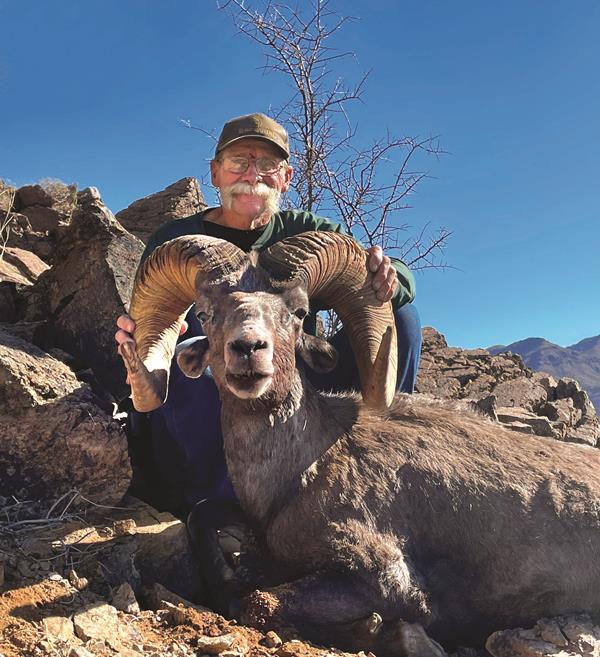 First of all, I would like to thank all the hard-working people at the Arizona Game Commission for making my hunting dream come true and the luck of the draw! I would also like to thank Huntin’ Fool so very much for helping me find a great outfitter like Sundowner Guide Service for my Arizona Desert bighorn sheep hunt. Owners Larry Johnson and Rayne Rush of Sundowner Guide Service were very helpful and take pride in providing the best hunt possible for their clients. Rayne’s brother, RJ Rush, is one of the best guides I have ever had (and I have had plenty), and it was a pleasure to hunt with him.

During the summer and fall, RJ would send me pictures and videos of the game that he saw in the area where I was drawn. It was so exciting to see such majestic animals and to know I would soon be seeing them in person.
Finally, it was time to go hunt! I was lucky enough to not have to leave my home state to go hunt, so I drove two hours to camp. When I got there, I met up with RJ and he said, “You ready to go see some sheep?” and off we went. RJ had an idea of where he wanted to look. We saw quite a few sheep during our scouting but nothing shootable.

In the early morning, we were off and running. We hunted all day and found a really big sheep, but it wasn’t on the unit I had drawn, so it was time to move on. We continued to scout and saw more sheep but nothing big. Back at camp that evening, all the guides told us what they had seen that day and we made our plans on where to go.
The next morning at daylight, we saw several sheep that looked promising. We met up with the other guides and went four or five miles around the mountain to see where the sheep had gone. We found them, and at that point, RJ had picked one out and said we needed to go take a closer look. Everyone stayed behind to keep an eye on the sheep while RJ and I got within 420 yards. RJ asked me if that was the ram I wanted, and I said, “Yes, definitely!”

I got a beautiful 11-year-old Desert bighorn sheep! At camp, they scored him to be 178 7/8". What a ram! I want to thank everyone who gave their time in this hunt. It was a team effort!