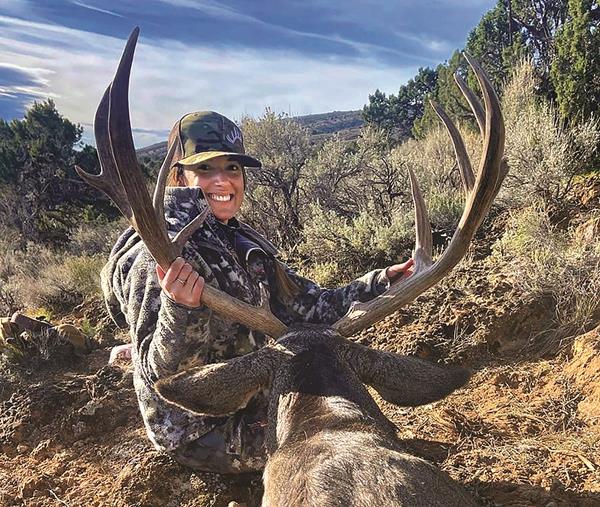 I remember exactly where I was at work the day I got the phone call from my husband, Brett Reyes, that I had drawn the late rifle Kaibab mule deer tag. I had never heard him that excited over the phone, and he ended up calling me five other times that same day just to talk about it. Come to find out, this tag is desired by those who dream of hunting world-class trophy mule deer. As I sat in my office, I remember feelings of excitement, anxiousness, and nervousness washing over me as this would be my first time hunting. One conversation that I remember Brett and I having was not to worry as we would have plenty of time to practice shooting, scouting, and making sure that I was as prepared as possible. Leading up to the hunt, I was so grateful to have my husband to coach, guide, and teach me everything I needed to know. We would frequently go out after work and on my days off to practice shooting, sometimes out to 900 yards!

My husband went up a week before the hunt to start scouting, and I joined a couple days in. I received several videos from Brett of a deer unlike any I had ever seen. We recognized how special he was, and we both agreed that this would be the buck we would try to harvest opening morning. He went on to tell me that we would work hard the next few days leading up to the hunt to learn his behavior and pattern. Fortunately, the deer were showing signs of a strong rut and this buck had already found several does. Brett explained to me that he wouldn’t be moving far since he had does, and as long as other bucks didn’t pressure him, we would have high chances of locating him. I would receive updates from Brett that he was able to find the buck in the mornings, put him to bed, and relocate him in the evenings. This was the case for several days, including the evening prior to the first day of my hunt.

The morning of the hunt, I was excited yet super anxious knowing that this buck was very sought after. I remember praying that morning before getting out of the truck for God to watch over me, give me a steady hand, and if I was successful in my hunt, thanking the animal for letting me be the one who would harvest it.

We gathered our gear, got into position where we thought the deer would be, and waited for first light. I had Brett and our good friend, Tyler Mott, at my side helping me spot and range. This allowed me to focus on remaining calm and making a good shot when the opportunity presented itself.

At first light, Brett located the buck pushing his does across a field of sage and it didn’t take me long to locate him through my scope. He stopped and gave me a perfect broadside shot, but as I went to pull the trigger, it wouldn’t fire. I had left the safety on. After that moment, I thought I had missed my chance. I started shaking from within my core, realizing later that this was the buck fever that everyone had always referred to. I took some deep breaths, regrouped, and with the help of my team, I was able to relocate the buck. He was at 550 yards. I shot and missed right behind the shoulder three inches high.

I felt defeated at this point, thinking once again that I had missed my chance. We could still see the buck, but at this point, he was over 900 yards away. We moved quickly to a new position for a closer shot. He was working up a ridge, and just before he crested over the top, he gave us one last broadside look. We ranged him at 700 yards. I shot, and the rest was history. I had killed my first big game animal, my first mule deer, and a buck that hit the magic 200" mark!

Words cannot begin to describe the overwhelming experience of my very first hunt. It was probably one of the most challenging moments I have ever had to endure on a physical, emotional, and spiritual level. I learned so much about conservation and grew a new appreciation for hunting. I built confidence in my shooting ability and was taught more about deer behavior, maturity, age, and score.

As much recognition as I have received from harvesting this animal, I really want to take this time to give recognition where it’s truly due. I had the privilege of having my husband be a hunting guide. I can tell you right now that hunting guides do not get enough credit for all of the countless hours of scouting, miles they put on their trucks, sleepless nights, and overwhelming dedication they put into each and every animal they pursue. People only get to see the end result and not the story that comes with every hunt. Hunting is much more than just killing an animal. This entire experience would not have been possible without Brett. I also want to give huge shoutouts to Tyler who was by our side the entire morning, making this moment possible, and to my father-in-law, Mike Reyes, and Bobby Reyes for all of their help. Overall, I could not be more grateful for the entire experience, the memories created, and the people I was able to share it with. I am so thankful for this special deer.