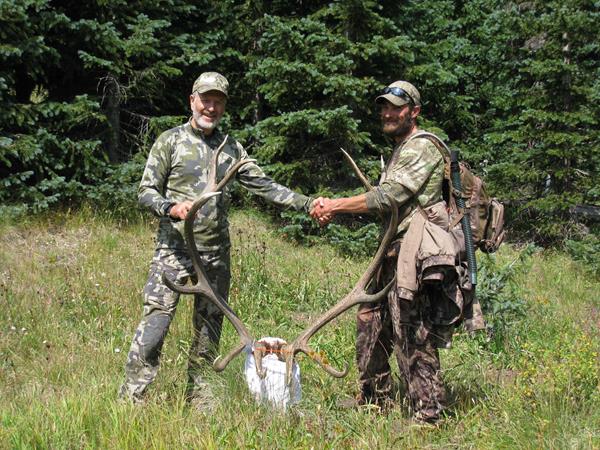 This is a story of two elk hunts connected by a single arrow. Like most hunts, it started in the planning stage early in 2017. I decided this was going to be my year to cash in 6 preference points for a Colorado elk hunt. I perused the Huntin’ Fool magazine for likely options. I had an interest in seeing the Uncompaghre Wilderness, so unit 66 seemed like it was calling my name as I read the review. I contacted Huntin’ Fool for outfitter recommendations, and Justin Mitchell of Action Adventures was hands down the favorite for the area. Initially, my mindset was to go on a self-guided drop camp hunt, but as I talked to Justin, I became convinced a 1x1 guided hunt was the best option for me.

As I drove the 1,100 miles from my home in Washington to Montrose, I thought that I should have high hopes but low expectations for this hunt. When Justin and I arrived at the trailhead, I was introduced to part of his crew – Mike Johnston, “guide extraordinaire,” and Daylin, a young 19-year-old Navajo who was recently hired on as an assistant guide. Mike was to be my constant companion for the next six days. We ended up working well together as a team, and even though Mike always had a plan for the day, he would ask my opinion when we had a situation involving an elk sighting. Being included in the decisionmaking process made the hunt that much more rewarding.

By midweek, we had seen a lot of elk but had not been given an opportunity by the wily beasts. Before we headed back to camp in darkness on the fourth day, we glassed the bottom of a deep canyon we had seen numerous elk filter into after their morning feeding. We spotted a bull coming out of a wallow just as light was fading. Hopefully this was a good sign for the next morning’s hunt.

The plan for the next morning was for Daylin and his two hunters, Zach and Chris, and Mike and me to go down opposite sides of the big canyon towards the bottom. The canyon flattened out to a series of linked meadows adjacent to a 100 acre quakie patch surrounded by pine timber. This was a perfect spot!

As Mike and I headed towards a bugle answering our cow calls, we closed the distance to about 100 yards. I was able to position myself behind some weeds for cover as Mike continued to stimulate the bull’s urge to come investigate. As the bull pushed a cow through an opening, I drew my bow, but he hung back, bugling his head off and forcing my hand to let off. As he finally stepped ahead on the game trail, I drew back again and let an arrow fly. He wheeled around and crashed through the timber as I sat in disbelief at the whole experience.

After some high fives, Mike and I went to investigate the scene. Mike found the intact arrow covered with blood, obviously a pass-through shot. Unfortunately, the blood trail disappeared after 80 yards, heading straight uphill. After much searching by the full team, we decided to come back in the morning. Chris thought he had clearly heard the death moan. That was somewhat encouraging, but that night was still full of doubts. Daylin, perhaps drawing on his Navajo roots, proclaimed that night a fire moon and a sign that we would find a dead elk in the morning. It was only fitting that Daylin found my elk not 100 yards from where I had shot him. He had turned back downhill to finally expire near the meadow. The sense of relief finding that elk was a huge release of dread. I will always be grateful to Justin, Mike, Daylin, and the rest of the team for their perseverance and encouragement. Driving home with a nice set of elk horns arching above the pickup bed, I set my sights on my next hunt.

When the Washington draw results were published, I was pleasantly surprised to draw the same archery bull elk tag I had drawn three years earlier. Hoping to reprise my success from 2014, I contacted my good friend, Luke Carrick, owner of Guiderite Adventures, to see if he could help me once again. We made a tentative plan on the September calendar for my archery hunt. The Norse Peak fire on Chinook Pass dashed any hopes of returning to the previous hunt location. Major access routes were closed by smoke and fire, so a change of plans was necessary. One benefit of relocating was that base camp was now a 12x12 wall tent instead of a backpack camp nine miles from the trailhead. Nevertheless, it soon became apparent that I was going to get my share of hiking in anyway.

The first evening, we sat on a rock outcropping overlooking a giant canyon, glassing for yellow and tan shapes on the opposite face. Smokey haze from the fire drifted below us down the creek bottom, occasionally swirling high into our line of sight. We spotted a couple of bulls and heard intermittent bugling, so our enthusiasm was high with no hesitation about the morning hike down to the creek bottom and up the opposite side.

That night, I carefully inspected the Colorado bull arrow still covered with dried blood and fitted with a new broadhead. Between hunts, I had checked its accuracy with a few target shots and it made the cut, so back in the quiver it went. I decided it would have the first position in the quiver should an opportunity present itself.

After some full-bodied coffee and oatmeal the next morning, we packed our sleeping bags and a small tarp. We certainly did not want to hike up and down the steep and rocky canyon walls daily. The descent down the canyon made me appreciate the wisdom of that decision. As we started uphill after crossing the creek, we heard other hunters cow calling nearby. We pushed uphill to put some distance between them and us, and it wasn’t long before we heard a bugle up ahead. Luke was familiar with the bench the bull was no doubt reclining on. It was obvious from the surroundings that bull elk frequented the knoll we were standing on. I positioned myself next to a large rub while Luke dropped behind me, out of sight, and started cow called persistently and urgently while the bull above kept answering. After 15 minutes, I heard some branches crack as the bull dropped down to join the “cow” he had been conversing with. He climbed the little knoll, and I drew the anointed arrow. I touched the release as he crossed in front of me at 25 yards. The bull did a 180-degree pirouette and crashed 75 yards away.

Luke joined me as I approached the mature 5x5. I marveled at how quickly the shot scene had unfolded, but keeping focused on the target kept my emotions in check, allowing a perfect double lung shot. During the butchering process, we discovered the broadhead just one inch in from the opposite side, but only the front half of the arrow was recovered. We noticed a secondary wound channel exiting the backstrap that seemed incongruous with the direction of arrow travel. After bagging and hanging the quarters, it was nearly dark and time for some well-deserved dinner and sleep on our open-air tarps. As I drifted off to sleep, I kept thinking about the missing arrow half.

Our campsite happened to be the little flat spot on the knoll where I had shot the bull. The next morning, as we sat on the ground drinking a cup of instant coffee, Luke happened to glance over 10 feet away and exclaimed, “There is the other half of your arrow!” It would take a forensics expert to chart the path of the arrow halves, so we were left to speculate. It made for good conversation as we hauled the quarters downhill to a location accessible by horseback. Later that day, we met up with Tracy Sorenson, a local farrier and friend whom I had prearranged to supply pack animals in the event a successful recovery was needed. What a feeling it was to connect these two fall hunts together with a single arrow. Stranger things have happened, but it was as memorable an elk season as I have ever had.