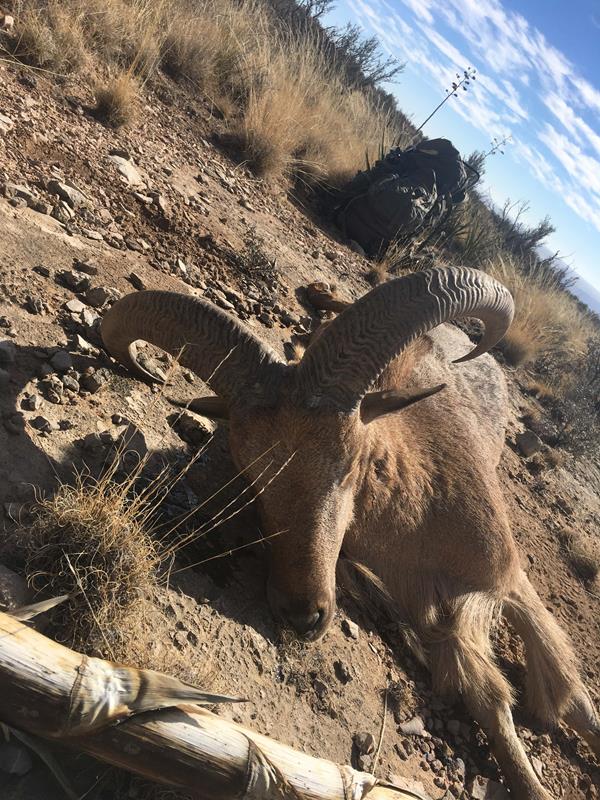 Aoudad sheep, commonly called Barbary sheep, in New Mexico were first introduced in the 1940s in the Hondo Valley on a private ranch. They quickly spread through the state and cemented themselves into the desert landscape. My first experience with them was on a cold winter night 35 years ago when my father came home from a hunt and I laid eyes upon one of these animals. Year after year, I thought about and imagined chasing these desert ghosts. Early 2018 was finally the year I committed and headed to the mountains in southeast New Mexico.

After spending countless hours, much to the dismay of wife, looking at Google scouting maps and topography, I was off in early January to find some sheep. I hunted hard for six days and covered hundreds of miles of country by truck, foot, and glass. I spotted countless elk, mule deer, javelina, and coyotes but not even a whisper of a sheep. On the last day of my hunt, several miles from the truck on an isolated mountaintop, I hit pay dirt - sheep tracks! Unfortunately, though, this hunt had come to an end. As I drove home late that night, I took a mental account of the past week. I could not decide what was more battered, my truck, my feet, or my eyes from all of the glassing. However, I was rejuvenated and was already conspiring on how to make it back to that lonely mountaintop.

For the next two weeks, my dreams were haunted every night by visions of that razor sharp, cactus ridden, prickly ridgetop. I called my father, and he agreed to meet me the following month so I could have another go at it. I was all in. I had another seven days to try to locate one of these sheep. With my truck loaded and ready to go, I received two sabotaging phone calls. The first was from my company’s headquarters saying that I had to go to an emergency meeting at the state capitol. The second was from my father, saying he could not go because my mom was having medical issues. Thankfully, everything worked out well for my mother and I was able to take care of my work responsibilities as well. I awoke from a deep sleep at 5 a.m. with two days of off time left and decided to make the seven-hour drive to my hunting area and at least give an all-in try for one day.

After driving nearly three hours on the broken, boulder-filled dirt road, I arrived. The omens for the hunt were also promising as I had not seen any sign of human life for the last four hours. The following morning, I found myself strapping on my pack and heading up the steep mountain trail at first light. Then, I saw my second good omen as a herd of approximately 150 elk peacefully fed across the desert canyon.  As I hiked and traversed sharp, thorny rock slides, the excitement of finally seeing a sheep was thick. After several hours, miles of hiking, and dissecting the countryside with my spotting scope, I began to wonder if what I was searching for even existed in these mountains. I climbed to the top of the ridge, seemingly the only flat piece of land for miles and miles. I sat overlooking distant canyons and the desert floor, and I was content and at peace. I remembered what it was that truly draws me to hunting. It was this moment. Solitude, quiet, and nature always seem to refocus and reset my being.

As I stood, I decided to cross over the small, flat top and investigate one last canyon. My thoughts were with my mother and her recovery, my wife, my children, and how I wished my dad could have made this trip. Then, all at once, I caught a fleeting glimpse of tawny-colored movement through the yucca, cacti, and chaparral. I immediately dropped to a knee, unshouldered my rifle, and slid a round into the chamber. I slowly stood back up and could see a ewe and then another and another approximately 300 yards away. As I carefully inspected every opening through the brush, my crosshairs landed on a ram. I settled them behind his shoulder and squeezed the trigger. Nothing. I had left the safety on. As I tried to reacquire the ram who had disappeared, I settled myself down and found his front shoulder once again. In that millisecond after the retort of the rifle, I imagined that I saw the ram fall forward and heard the slap of the bullet. Through a small opening on the ridgeline, I saw a herd of about 13 sheep going over and dropping off the cliff one by one. Then I saw a large ram stop and look back. I watched my crosshair stick to his front shoulder, but I let him go. Although I thought I had missed, I did not want to take the chance of wounding or killing two sheep. I quickly scurried to the edge of the drop off to see if I could see any sign of a wounded ram. They had inexplicably vanished. Despite being able to see for miles and miles, I could not find those sheep again. I circled back to where I had last seen my ram and started making my tracking circle, when I caught a glimpse of a shiny rock on the ground. With further inspection with my binoculars, I had my ram down.

While my sheep is not a trophy in the traditional sense, this is one of the finest trophies I have ever taken. I feel blessed to have the opportunity to hunt public land in an over-the-counter unit and have the opportunity to lay my hands on such a majestic animal. While I understand that the Game and Fish is trying to eliminate them so they can reintroduce Desert bighorn, I selfishly hope they are unsuccessful and that I have the opportunity to chase these sheep once again. As I loaded my pack, I could not help to smile. Several hours and 12 miles later as I unloaded my final load at the truck, the energy in my body had faded, but my smile was brighter than ever.