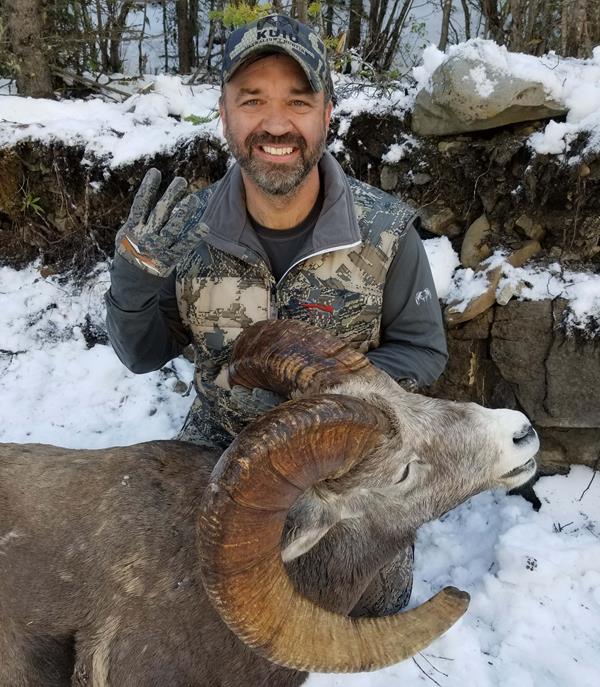 Dare to Dream, Commit to It, and Have the Will to Never Let it Go!

This is my fourth sheep story to share, and I am so thankful! Now that the dream quest of my Grand Slam is complete, I feel so blessed and honored to share my latest spiritual journey with my fellow dedicated brothers and sisters.

After training and hunting hard for my Rocky in 2016, I was pretty bummed given the time and effort put forth and never had the chance to pull the trigger on a legal ram. Instead of getting down, I decided to get over it, change gears, and change teams. I called Scott Carter in Alberta, whom I had talked with before. I had heard great things about Scott, and he was committed to helping me fulfill my dream quest. He told me I wouldn’t leave until it was complete. He was going to come along on the hunt and bring Lee White with him.

I flew from Birmingham, Alabama to Denver, Colorado and then to Calgary. I spent the night in Calgary, and Lee White was to pick me up the next day. I enjoyed my last night in a bed for a while.

The next day, Lee picked me up at 10 a.m. We drove north to Rocky Mountain House for my sheep license and added supplies. We then drove west towards the trailhead bordering Banff National Park. After driving a few miles on dirt roads, we arrived at a meadow where the truck and trailer could be dropped off for a sheep expedition. We ferried a couple of loads to our first sheep camp on the quad, and I enjoyed getting to know Lee. We turned in at 9:15 p.m. It was a cold but calm night.

We got up at first light the next morning to a hard freeze. We had our oatmeal and cowboy coffee before packing out for the day to glass surrounding mountains. We would move camp on Sunday if we didn’t spot or harvest a good ram today. Scott would arrive with horses and more supplies, and we could move deeper into sheep country if needed. By the end of the day, no rams had been found.

On Sunday, we broke camp to be prepared for Scott’s arrival later in the day to ride deeper into sheep country. During the day, Lee and I glassed the adjoining mountains with no luck. Scott arrived late in the day, and we rode about two hours in the dark to get to our next camp. We set up camp and put dinner together before calling it a night. From the looks of the surrounding mountains, I would need to get all the rest I could.

We were up at first light and quickly knocked out the morning chores. We worked hard all day, and 15 rams and 10 ewes were spotted. We saw one really good legal ram, but he was miles away. Maybe we could make a play on him tomorrow. Back at camp, we talked about the day and formulated plans for the next day. We were going to start leaving the horses at camp going forward given the location of the rams and the routes planned to access them.

Tuesday was a lung buster day. I had never hiked so hard vertically or for so many miles! Two legal rams and one young ram were spotted along with six ewes. We would get on them eventually because this team didn’t assemble to fail.

The next day, it was really snowing and visibility was poor. We didn’t know if we would even be able to hunt. We thought we had a break in weather, so we went up the mountain at noon. We got caught in the snowstorm that blew in with force. We moved quickly and got down safely. Over the next 24 hours, over a foot of snow fell in the basin where we were camped. The accumulation high on the mountain was a lot more than a foot.

We were snowed in on Thursday, but the weather cleared and we hunted hard on Friday. We climbed up and down two imposing peaks. Late in the day, we were all spread out, glassing over miles of mountains. Scott came charging up the mountain and said, “I spotted three legal rams together. One of them is really good, but I need to know if you are committed because it’s going to be hard and we have about two and a half hours of light left. Are you in?”

I replied, “Absolutely! Let’s do it.”

We were determined and made great time down the mountain. We got to the place where Scott thought the rams would be and there was a shooting lane in the timber that extended hundreds of yards down the mountain. We looked down this opening, and at the bottom in between fallen timbers was the big ram. I took off my pack and put it under my arm. Then another pack was inserted under my shooting arm. I rested the Kimber Mountain Ascent .280 A.I. on the packs and found the ram. Boom! He was down. I fell back in the snow and was overcome with emotion. After all of the hard work, saving, training, and planning, there was my dream ram.

We got down only to discover that I had shot the ram low on the shoulder. I located him in the scope right before he hobbled over the skyline. Scott and Lee said that it was almost dark and we shouldn’t bump him. Lee also commented that we would find the ram lying at the bottom of the mountain near the river in the morning.

On Saturday, Scott and I met each other by the river. As we looked up at the skyline, we saw the two subordinate rams alone. Scott said that was a good sign. We met up with Lee and told him what had happened. We quickly got our gear together and set out. We tracked blood as we sidehilled for almost two hours, and then the blood stopped at a sheer face. We looked left and down the mountain and saw a blood trail. We looked down to the river and there he was, expired. No second shot was needed. We made our way down and got to the grand old ram that we aged at 10+ years old. I was simply elated!

I got up at 11 a.m. on Sunday, got some coffee on, and gathered all of my gear to wash and get squared away. This worked well because we couldn’t go see the Game and Fish officials until Monday. I had a very productive day getting everything washed and dried.

Scott picked me up Monday morning, and we headed to Edmonton. We handled all of the Game and Fish chores, we had a great visit over a great meal, and he dropped me off later in the day so I could get prepared for my flight out Tuesday morning.

I can’t say enough good things about Scott Carter and Lee White from Scott Carter Outfitting. If you are committed and have the will to persevere through the highs and lows of sheep hunting, Scott and his team will help you harvest a nice Rocky Mountain bighorn ram. He has the game and the skill set required to make it happen. Thank you to my wife and best friend, Kelley, for her understanding of my dream. Also, thank you, Lord; you make all things possible!