Blessed to be a Hunter 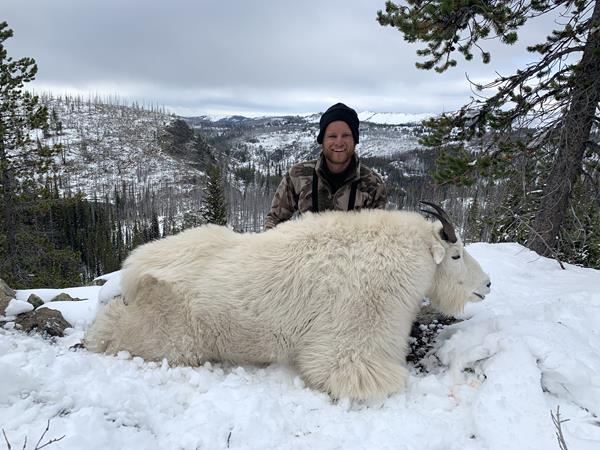 I have been hunting for about 20 years, 5 of which I was a certified guide in Alaska, and throughout that time, I have always enjoyed pursuing a variety of animals. From chasing archery elk in the fall to calling in ducks in the winter, it’s a true passion. In the fall of 2017, my brother, Eric, drew a California bighorn sheep tag. The time spent helping him scout and hunt for his ram hooked me immediately, and I decided that it was time to put in for trophy species draw tags.

In April of 2019, I submitted my application for a Rocky Mountain goat draw tag. The night before my wedding, I was hanging out with a few buddies and opened up Facebook out of habit. The first story on my feed was of a friend who had drawn a goat tag for a different unit. Immediately, my friends and I checked to see if we had drawn, and when I saw the word “Successful,” I was in complete disbelief. There were only four tags available; there was no way I had drawn. I waited until the next morning, the day of my wedding, to ask my brother to double-check the results, and he confirmed that I had actually drawn a tag.

Between all of my friends and me, none of us had any experience hunting goats, so I knew that I needed some expert input and advice. I reached out to Robert at Huntin’ Fool, and he was extremely helpful in multiple facets, including helping me learn how to quickly distinguish a billy from a nanny and tips for spotting them in the snow. I also talked to George Fischer about tips for where to start scouting based off his work as a Fish and Game officer in that area.

I knew this would be both physically and mentally challenging, so I put time into getting my body conditioned. I made it a point to regularly go to the gym and hit the hills, putting on multiple miles in advance of the hunt.
Although the hunt opened in August, the advice I had gained advised that I wait as late as I could before the snow came to begin hunting. I also wanted a shot at getting a billy with his longer winter coat. When October 1st rolled around, I felt like my brother, Eric, and I were as prepared as we could be headed into day one of my hunt in the Seven Devils.

We hiked in and set up camp next to a lake about eight miles from the trailhead and took in enough supplies for about a week. That Monday, the summit had about a foot of fresh snow and the temps dipped heavily into single digits. On Wednesday, we did a lot of scouting and saw plenty of good sign. Spotting goat tracks in the snow was wild; the goats’ coats drag along next to them in the powder, creating a brush-like effect on either side of their hoof tracks.

Thursday morning, we hiked an additional three miles into the Seven Devils to where we felt like the goats would be based off of our scouting the previous day. We saw one young billy right away, and that boosted our confidence in our location. Not long after, a nanny and a kid filtered their way into our view and spent some time soaking up the sun.

We worked our way around the canyon over towards some lakes where Eric spotted a nice billy bedded down on a rock cliff above one of the lakes. The billy’s location was primetime considering the amount of snow that we had and were continuing to get. After watching him for about three hours, I decided he was the one. Eric and I came up with a game plan for getting closer to the billy for a better shot. We thought we could get within 200 yards of him if we hiked around and behind him where we would be at a vantage point. However, once we got to that location, I realized that I didn’t have a shot and we’d have to get even closer.

We snuck around the lower end of our initial vantage point, and it put us within 112 yards of the billy. He was laying down at what was essentially a 45-degree angle with no idea we were there. I wedged myself in a snowbank, got prone on my pack, and set up my .300 Weatherby for the shot. He was still bedded down, so I fired a 180-grain Berger bullet right into where his vitals would be quartering away. He started to stand up, so I fired again, and when he laid down, I shot one last time just to make sure he didn’t get up and jump off of the cliff he was bedded on.

It was so steep and gnarly that it took us about half an hour to get to him, and as I got closer, everything about the experience felt surreal. All of the time that I had spent preparing for the hunt had culminated to this point. These animals are some of the most majestic I have seen. It’s impossible to not respect creatures that live so effortlessly in such punishing terrain.

After we took a few pictures and caped him out, it started snowing heavily again and we were rapidly losing daylight. Our only way out was back up that 45-degree angled chute, and the weather wasn’t doing us any favors. We loaded up our packs and started back out and nearly straight up about 120 pounds heavier than when we came in. It took us about four hours to get back to camp, and we got back around midnight.

Although this tag is open for a few months, it felt like time flew by in a matter of days. Looking back, I’m immensely grateful that I had both the opportunity and the ability to do a hunt like this. I’m thankful that I have a brother who was willing to share the challenges of this trip, and I’m forever blessed to be a hunter.