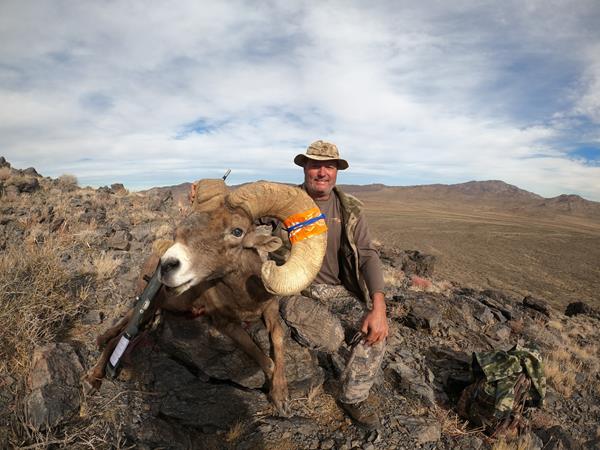 A hot day in May, my cousin called to inform me that the California draw results were up. From a watermelon field, I pulled up my draw results. Reading them three times, I could not believe I was drawn for a sheep tag in the new California unit Newberry, Rodman, & Ord. This unit had never been hunted legally since the Gold Rush era.
By mid-summer, I was required to attend the mandatory Fish and Wildlife meeting for sheep tag winners. A very informative program was set up for us hunters with maps and biologists present. California has a very conservative approach to sheep tags. There must be a minimum of 15 mature rams per tag issued in each unit. I was thinking about how hard it could be to track down a book ram with that many rams that had never been hunted.

By September, I had not even visited the unit to scout. My rationale was that the hunt would begin in December, so what was the point of hiking around in summer heat and wind? My best friend, Doug Stanley, had driven into the unit twice on recent business trips and had some intel as to a certain mountain and bowl that the biologist told me to check out.

By November, Doug and I had a plan to start. We would load up the vintage Toyota Land Cruiser we use to hunt deer and go old school. Due to another business trip, we were delayed a couple days after the opening Saturday of the season.

My first day, we ran into another hunter and heard of the first kill in this unit, a 172" ram. It was a real show of guides, sub-guides, and wheel-to-wheel racing. I was glad I missed it. At this point, Doug and I had only seen a handful of medium rams at mid-range and higher.

The next day, Doug and I determined that we would leave the Cruiser and climb the East Ord Mountain. Walking an old mining and sheep trail from a saddle, it was not too difficult. With the 2,000-foot elevation change, it was a different world of cold and wind. Walking along the ridge, it took several miles of increasing sign before we saw our first ram. We came around a rockpile and he was 30 yards in 40 mph wind. He bounced over the side before I could even digest his score other than he was a very nice mature ram.

Slowing our pace at the end of this ridge, we moved in a better glassing position out of the wind behind a large boulder. From this location, we began to spot sheep all around us. There was a mixed band of seven below us, four in a small patch of snow, two studs in the shadow of a rockpile looking at us at 440 yards, and more scattered elsewhere. I tried to figure out a plan on one of the studs as we sized him up in a wobbling spotting scope. I really did not want to shoot that far in wind with crappy copper bullets. The two studs finally had enough of us and bounced over the ridge. Doug and I followed, hoping to get a better option.

Over the ridge, we found them again with another 10 rams in a small bowl. Of the pack, there were two that really stood out at about 170"+. As we crept in behind a rock finger for a 200-yard shot, a small ram out of nowhere busted us. He ran through the middle of the bowl and everything busted out without looking back.

The next morning, I was too sore and not ready to climb the ridge again. Going old school in the Cruiser, I decided that we should go further south and glass from the desert floor into the end we saw the rams from the previous day. From a lawn chair, I spotted a heavy ram halfway up the mountain. He was by himself but too far off to get a score. Orienting him to various rock formations, we set off on our two-hour stalk.

Popping over the final ridge, I spotted what I thought was him. Delirious from the climb, I laid down and prepared to shoot. Doug looked closer at him and said, “No! That is not the ram we came up here after.” He was right. Seconds later, the ram busted us and four others, including a bruiser. The pack rounded a rock pile and temporarily disappeared into a ravine. I took the time to range the opposite side of their intended exit at 300 yards. Shooting a Kimber .300 Win with crappy California-required copper bullets, I prepared for a shot. Seconds later, they popped out in a single file line. Whack! The big ram broke formation briefly while on the incline, rejoined, and kept going. I racked off a couple more rounds at him, thinking he was hit anyway.

At the whack site, Doug and I found nothing. No blood and no tracks as it was all rock. I could not believe it was a miss and hit a rock. I shoot coyotes on the run regularly like this. We set out walking in the horizontal trajectory the rams took and kept looking for him.

An hour later, we found ourselves in some tough terrain with no sign of any sheep. Focusing on our exit from the mountain, we began looking down toward the ridges leading to the valley floor and the Land Cruiser. Doug spotted him! On a small finger, the bruiser and another large ram were relaxing in the sun. At 1,200 yards with the wind in our faces and both rams lying down, we headed down.

Closing in on the finger where the rams were last spotted, the wind was at our backs again. By the time we made our way through the last pile of rocks, we were 200 yards and the rams stood up on our scent. As they broke for an escape, I took the only shot available. Boom! Nothing. Round two. Whack! He was dragging his back legs. Horrible. I finished him off from a better angle hearing the copper bullet ricochet off into the distance from its exit. I was excited to finally get him down but extremely sad at the events this beautiful old ram went through. I blame everything on the performance of the mandatory copper bullets.

Doug and I spent an hour admiring the ram and discussing the events. Upon skinning him out, we found several bullet holes and a lot of bloodshot meat. One was still in him that I believed to be the first shot from several ridges over.

We checked in with the Fish and Wildlife biologists later that night. Their jaws dropped when the tailgate came down on my Dodge. They called him a real bruiser. Broomed way off on both sides, they rough scored him at 169 7/8" at a ripe old age of 13-14 years.