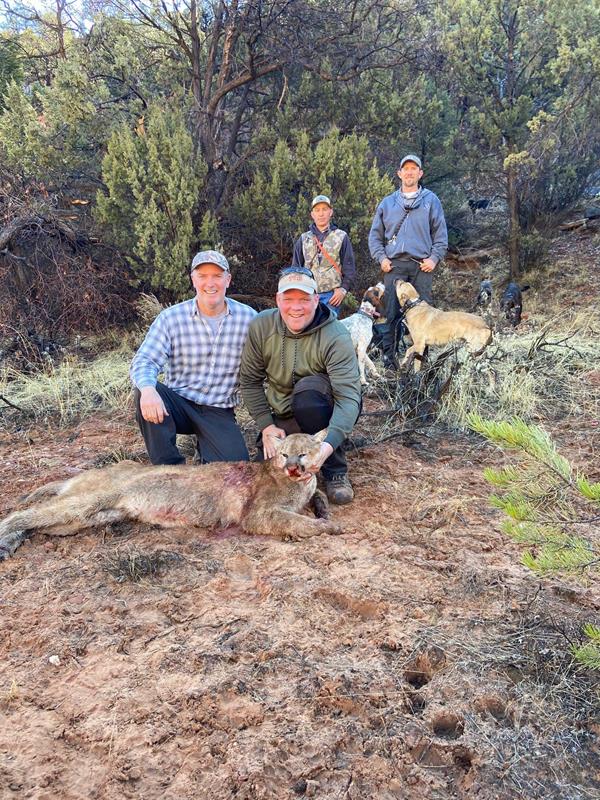 My lion hunt began with a call to Garth Jenson at Huntin’ Fool. He and I connect every January to review my big game application profile and prepare for the upcoming hunting season. While I have had some success in recent years drawing limited-entry tags, I wanted to hedge my luck by booking a lion hunt in the event I did not draw this year. Garth suggested I first speak with Jake Bess, arguably one of the top houndsmen in Southern Utah. I called Jake and he had openings for a spring “dry ground” hunt. He allowed me to invite a good friend to join as an additional hunter, so I booked immediately.

My friend, Andy, and I arrived in Salt Lake City the evening of March 8th. The next morning, we headed south to Cedar City, Utah where we met up with some of the staff at Huntin’ Fool. It was great to shake hands and share stories with the friendly staff members, many of whom I have worked with over the years. Most of the staff we met knew Jake and of his reputation as a successful outfitter and lion hunter. We couldn’t wait to get to Kanab and start our hunt.

Our first day of hunting was Tuesday, March 10th. We awoke to a cool, wet rain, not exactly ideal conditions for spotting fresh cat tracks on the sandy roads of the Paunsaugunt. Jake arrived at our motel around 7:00 a.m. and was unusually optimistic for our morning drive. We spent the better part of the day driving the backroads, looking at many washed out deer, elk, lion, and domestic dog tracks. Apparently, the shed hunters have upped their game and are now using shed hunting canines to increase their odds of finding “white gold.” Day one concluded with no fresh tracks to trail.

Day two started out with even worse weather conditions than the previous day. A steady rain overnight and into the early morning hours would surely wash out any evidence of the lion’s nocturnal hunting tracks. When we arrived at the hunting area, the rain let up some, and after an hour or so, Jake spotted a fresh track. He let out his favorite hound, a dog named Cowboy. He picked up the scent immediately and began making a “whooping” sound common to his breed. Jake decided to let out a few more of the pack, and the chase was on. Thirty minutes later, we could hear the dogs getting excited and barking like crazy. We got the rifle, our licenses, and some extra bullets and headed out.

We made a treacherous climb down into the rocky canyon, picking our way through steep ledges and narrow chutes, and eventually fought our way through the thick canebrake in the bottom of the draws. When we finally got to the area where the cat was treed, a half mile from the truck, Andy and I were gasping for air in the 5,800-foot elevations. After slowing down enough to steady his shot, Andy made a perfect lung shot on the treed cat. The big cat hit the ground running and tumbling down the tree-choked hillside. The excited dogs went ballistic, barking and snarling at the downed cat. We enjoyed a moment of celebration and a brief photo op at the kill site. Afterwards, Jake and his buddy, Richie, expertly skinned the cat. We decided there was plenty of time in the day for more hunting, so we packed up and got back on the road, looking for the elusive cat tracks.

In an effort to cover more ground, we decided to split up into two vehicles with Jake and his two hunters in one truck and Richie and his friend, Don, in the other. As we drove the labyrinth of sandy roads, we eagerly scanned the edges for fresh tracks, when all at once, the three of us blurted out, “Fresh tracks!” These tracks were not only fresh, but even to a novice, they were big. Jake got out and examined the freshly made prints in the road and felt the lion was moving into an area where we could catch him. He called Richie and had him meet us on the side of the road where we had parked. Once Richie arrived and examined the tracks, he let out some of his hounds to see if they could pick up the scent leading to the big cat. They hit the track, barking and howling.

After what seemed like hours, Richie called us back with instructions to drive to the other side of mountain and meet him on top. We made the long looping drive around the mountain, excited and hopeful that the cat would still be there. On the backside of the mountain, we started the very difficult drive up a steep, loosely-packed, sandy road. Halfway up the mountain, our truck bogged down and we needed to make the final approach on foot. We could hear the cacophony of dogs barking excitedly in the distance, and it gave us the needed encouragement to keep plodding along, stopping only long enough to gasp for oxygen.

Finally, I made it to the tree where the big tom was laid out on a high branch, casually looking down at the chaos below him. Jake gave me his rifle, a lever-actioned .357 caliber Rossi. I loaded the chamber, and when Jake gave me the OK, I drew the bead and blade on the forward center of cat’s ribcage and gently squeezed the trigger. The cat leapt at the shot, somehow hanging onto the branch with his front claws. I then quickly cut loose with a second shot. He hit the ground running downhill and over a ledge into a deep draw. Jake shouted for me to come down the hill quickly and finish the cat but do not shoot the dogs. When the cat cleared the dogs and brush, I shot across the canyon and he came tumbling down the hill, dogs barking and whooping in tow. We now had our second cougar caught and killed on the same day in the most unlikely and challenging of circumstances. Congratulations to the hounds, the houndsmen, and one of our most magnificent of big game animals, the western mountain lion (felis concolor), cat of a single color.

For sheer excitement, it is hard to beat the adrenalin rush of a pack of hounds, whooping excitedly, hot on the trail of a big tom cat!