A Chronicle of My Ely, NV Mule Deer Hunt 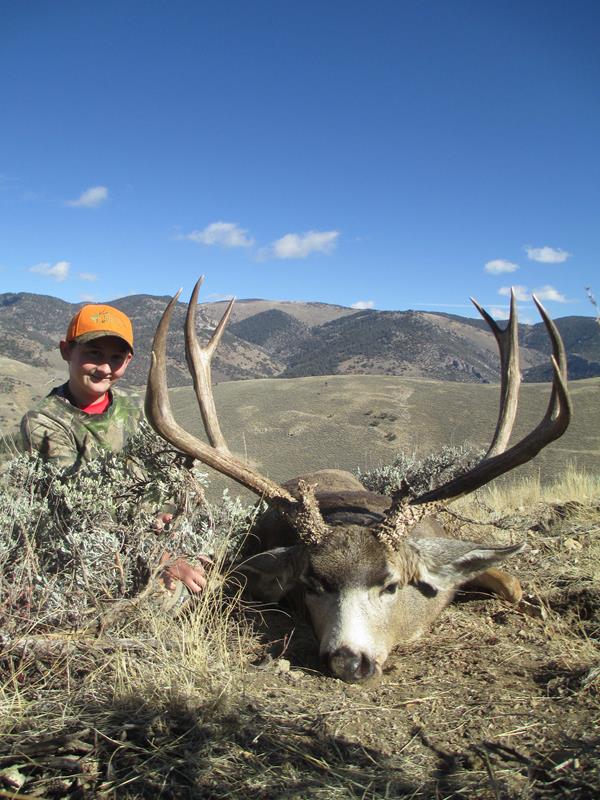 When my dad told me I had drawn the Ely, Nevada mule deer tag, I was super excited. Then he told me there was a Friends of NRA dinner banquet in the area in July. He said we were going to go over there to scout. While we were there, we met up with my dad’s friend, Jody, and he showed us some good places with a good amount of deer, although we didn’t see the big deer we were looking for. On the drive home, my dad said, “We have to workout because we are going to be about 8,000-12,000 feet up and the hikes and the pack out will be rough.”

It was time for the hunt. My dad, Papa, and I set off for Ely. On our first morning, we headed to a place we had scouted in July with Jody. As we were driving up the mountain, we saw five other cars behind us. There was a split in the road, and we took a right. Only one other car came with us. As we drove around, we saw a few does on the side of the road but no bucks. When we stopped to glass, we saw at least 20 does but still no bucks. We got back in the truck and kept driving and repeated that a few more times. We saw a lot of does and about four small bucks.

At noon, we decided to go look for an area to sight in the guns and have a sandwich. After we ate, my dad decided to look off the mountain a bit and saw a small forked horn. It was time to get the guns sighted in. Dad had me shoot at a rock about 600 yards away. After my first shot, he quickly looked over at the buck to see what it did. It didn’t even flinch. I shot a few more times and then we packed every thing back up and left to go look some more.

At about 4:00 p.m., we drove up to a tall peak and looked down and saw a couple of small bucks bedded down in the snow. We got back in the truck and drove some more and saw a few more does on the side of the road. On the first day of the hunt, we saw a lot of deer but no big bucks.

The next morning, we went to a spot that another friend, Jose, had told us about. At 6:00 a.m., we started glassing. We saw a few does and a few small bucks. I spotted a buck in the trees, but it quickly passed and I didn’t see it again. We got in the truck and set off for a different viewpoint to glass. As we were glassing, my dad spotted two really nice 4x4 bucks and a bunch of does. We watched them feed over the mountain and decided to make a stalk.

By the time we got to the peak, my dad said, “Stay quiet.” We were about 50 yards from where we had last seen the bucks. We walked over to a juniper tree and looked around but didn’t see them, so we went down the mountain a bit and up to look it over again. We didn’t see anything, so we took a break and had something to eat. After we ate, we circled back on the other side of the mountain and started to hike.

I stopped. There were about 20 does, and we saw one of the bucks, but it was the smaller 4x4. Right above, there was a patch of junipers, so we sneaked up to them. However, the wind changed and spooked all the does. The small buck followed, and the big one was nowhere to be seen. After that, we had a long hike back to the truck. During the rest of the day, we didn’t really see anything else.

We decided to give the place a rest and go back the day after tomorrow. Instead, we went to another place Jody had shown us. My dad spotted a big group of deer with five bucks, but they were so high up that we couldn’t see how big. We got back in the truck and got to a different angle to look at them again. There was one that was pretty big, but we didn’t know how to get up there, so we decided to move on.

The following day, we headed to look for the big 4x4. Once there was enough light, we started glassing. On the ridge to the right of where we had stalked the other buck and does, we spotted him. He kept walking, and about 20 or 30 minutes later, he went over the ridge. We went around the mountain to see the other side of the ridge but didn’t see him.

The next day, we went to the same place, hoping to see that same buck. As we were glassing, I was looking way up on the back knob where we were the day before.

I replied, “Up the pass, the knob that he was on yesterday.”

Dad couldn’t see it, so I got up to set up on the spotting scope. Dad said it had to be him. He was about three miles away, so we had to find a way to get to him. We drove around the mountain, got out of the truck, and started glassing the knob. At first, we couldn’t find him, but we kept glassing. I was glassing right where I had seen him last, and I just kept looking. Then I saw movement behind a juniper tree. I said, “Got him!” When he came out of the juniper trees, my dad said, “It’s not him. It’s a huge forked horn.”

The following morning was windy, but we were determined to locate the big buck. It started off slow, but we just kept glassing. Finally, my dad said, “Got him!” There he was! We got our packs and my gun and started hiking. It was a three-hour walk. As we got through the trees, we spotted him again. We were about 700 yards away and it was windy, so we had to go up the mountain. I got on the buck, but there was no place to lie down, so we just stayed and watched.

About an hour went by, and the buck still didn’t stand up. My dad said he didn’t think it was him, that it was actually the smaller one. We backed out to the other side of the mountain to think. We talked for a bit and had a bite to eat. When we finished eating, my dad said it was my choice to either start going back to the truck or go back to take another look. I decided to go take another look. We went in at a different angle. A doe spooked up, and the buck looked right at us. Dad said, “Let’s get that buck.”

I put the gun on the tripod because we had forgotten the shooting sticks at home. I put my elbow on my dad’s shoulder and got steady. My heart was pumping. I was ready. The buck stood up, moved about three steps, and I said, “I’m going to shoot when he stops.” He took three more steps and then stopped. Boom! The gun went off and my dad said to shoot him twice. I reloaded and noticed the does didn’t even move.

Dad was looking and said, “I think he’s down.”

We waited for about 15 minutes before we went over. The does were still there, and they had no idea what had happened. As we approached the buck, my dad said it was definitely him. We were super excited and started jumping up and down. We took some photos and then the real work began.

I would like to thank my dad and Papa for passing down their love of hunting to me. Thanks to my dad’s friends, Jody and Jose, for getting us acquainted with the hunting area. This was my first mule deer and my favorite hunt so far!

Also, here is a poem I wrote for an English assignment before my hunt:
My Mule Deer Hunt

Official news is here;
I get to hunt mule deer.
Mountains high with dense trees;
Elated for the trigger squeeze.
Loaded - ready in the truck;
I must seek the biggest buck.
Glassing hours, hikes, and scout;
Will produce the greatest mount.