A First for Everything 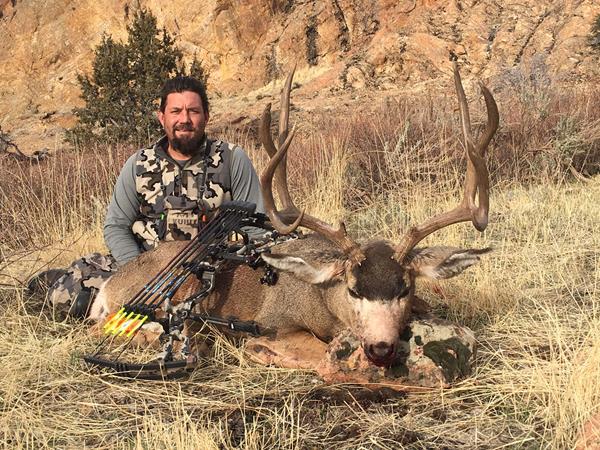 This story starts with a fishing trip I went on with family and friends 20 years ago. While on that trip, I was amazed by the beauty of the country and the nice deer and elk we would see. I told myself I would someday go back there to hunt.

After many years of putting in for bucks and bulls, I finally drew a tag. It was a late season archery deer tag, which was not my first choice. Due to a heavy work schedule, not having the time to scout the unit properly, and having found out from the local biologist that most of the bucks in this area were just moving through on their way to their wintering ground, I thought about turning the tag in and waiting a year. That is until I spoke to Robert Hanneman at Huntin’ Fool. I shared my concerns with him, and he told me I would be crazy to turn in this tag. Robert put me in contact with Riley Manzonie at Currant Creek Outfitters. Riley assured me this was a great unit and shared some photos of the monsters they had harvested in years past. I was still hesitant as I had never used a guide before. However, my wife finally convinced me to book the hunt with Currant Creek Outfitters.

My good friend and hunting buddy, Jerame Schultz, offered to tag along and be my cameraman, so we loaded up the travel trailer and headed to Nevada. It was dark by the time we got to camp the night before the hunt opened. We were welcomed by Austin, who was guiding, and Todd, the other hunter in our camp. Austin helped us get settled in, and we spent the evening telling stories.

Jerame and I were on our own opening day as our guide, Josh, had just finished up another hunt and would not make it to camp until nightfall. We left camp in the dark, heading the opposite direction of Austin and Todd. We drove and glassed all day, covering a large section of the unit. We saw some decent bucks and a couple of small bulls but nothing worth chasing.

We rolled into camp after dark and found out that Austin and Todd had not seen much more than we had that first day. Later that evening, Josh arrived at camp and assured us we would see a lot of bucks. He shared some stories and photos of last year’s success and said there were reports of a drop tine buck seen this year. Our excitement levels were back up, and we didn’t get much sleep that night.

On the second day, we were gone before daylight. Josh took us to one of his favorite spots to glass, and as we came around the corner at first light, there was a beautiful 180" dark horned buck rutting some does 100 yards off the road. We stopped, took some video and photos, and very reluctantly passed on one of the most beautiful bucks I had ever seen.

We spent the next couple of hours glassing and enjoying the beautiful scenery but could not turn up anything worthwhile. That is when Josh got a text from another CCO guide who was guiding some guys on elk. They had spotted the dropper buck. The race was on.

We made our way to the area where the dropper was spotted but were unable to find him. Austin and Todd came up the road super excited, saying they had just jumped the dropper 50 yards off the road. We ran out of light before we were able to put a stalk on him. Back at camp, we looked at the video that Josh had taken of the buck, and I decided he wasn’t quite what I was looking for as he had regressed from the previous year.

On the third day, we were gone again before light, heading in a completely different direction. Josh took us to a place where they had harvested a big buck the year before. We saw at least 10 170" bucks, most of which were in a great area to put a stalk on them, but I was looking for something a little better. We got back to camp after dark again, but this time there was a big set of antlers waiting for us. Todd had harvested a great 175" 5x6.

Before light on the fourth day, we headed back in the direction we had gone the first day with Josh. We moved from one group of hot does and rutting bucks to another. We covered a lot of beautiful ground and saw many shooter bucks, just not quite what I was looking for.

As we came around a large rock outcropping, we saw another hot spot with four or five bucks running around. We pulled over and watched the group for about 15 minutes from 250 yards away. We started to see more and more does and bucks as we watched. There was a large 5x6 that seemed to be pushing all of the other bucks around. He was a great 170 class buck but not quite what we were looking for.

We were about to move on when Josh saw something in the video he had taken. It was a big buck deep in the trees chasing off bucks but never leaving a certain area. I decided I’d better take a closer look. The deer were already starting to spook a little and we were not sure of the wind, so I went alone. I headed around a rock outcropping to see if I could get above the deer. I immediately bumped a doe on the backside that ran around the bottom of the outcropping and into the middle of the hot spot, causing some deer to start moving off. I continued behind the rock outcropping and decided to peek out to see if I could find the buck. As soon as I came up above the rocks, my wind was blowing straight at them. I thought I had blown it, so I dropped back behind the rocks and made my way up the ridge to see if I could get above them with better wind.

As I made my way to the edge of the bowl, I caught movement in front of me in a perfect shooting lane. It was the big buck. He was beautiful with everything I was looking for. He moved up towards the ridge and pushed a doe back into the middle of the bowl. I decided if given the opportunity I would take the shot. I watched him continue to circle. He finally came to a stop just left of my shooting lane. I could see his hindquarters and his head but didn’t have a shot. He stood motionless. I ranged him at 38 yards, set my sight, and waited for a shot.

The wind began to blow again, and the rest of the deer began to move off. Just then, he turned and stepped right, presenting me with a great quartering away shot. I pulled the trigger on my release and watched the arrow bury deep behind his last rib. He crashed through the trees, running down the draw toward Josh and Jerame, who were filming from the truck. Then all went silent, but only for a split second as Jerame and Josh started cheering and yelling. We had done it. I walked down to this magnificent animal in awe and gave thanks for letting me harvest him.

I was so happy and felt very lucky to harvest this animal with a bow. After caping out the deer, Josh field measured the buck at 188", the largest buck yet for me. Back at camp, we had an amazing dinner and spent the evening talking about what an awesome hunt this was.

When we woke up the next day, Josh was already packed and ready to leave. We thanked him and wished him safe travels as he was headed to yet another hunt. Jerame and I sat and discussed all of the things we had experienced, all of the beautiful wildlife and country we had seen, the memories we had created, and the friendships we had made. One thing we realized, we had never seen our camp in the daylight. There is a first time for everything.

I want to thank everyone who helped make this happen. Thanks to Huntin’ Fool for helping me realize the opportunity I had. Thanks to Josh and Riley at CCO for making my first experience with a guide a great one. I will definitely recommend and use them again. Thanks to Jerame for taking the time to go with me on the best hunt of my lifetime so far. Most importantly, thank you to my beautiful wife and daughters for putting up with my addiction.