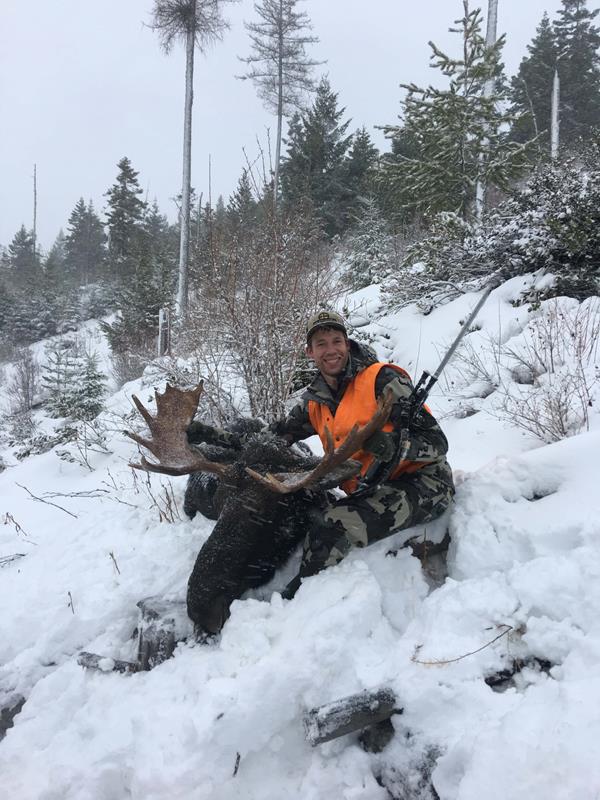 It was the middle of June 2017 when I had finally accomplished my goal of graduating college with my associate degree. I was ecstatic! A few days later, I came home from work anxious to log on to the Washington Fish and Wildlife website to check if the special draw results had been published yet. Once I finally logged in to my account and checked my results, my eyes opened wide and my heart skipped a beat. I had been drawn for a once-in-a-lifetime moose tag for the 49 Degrees North unit in November in my home state of Washington. I immediately picked up my phone and called my dad at work. When he answered, I said, “You’ll never believe it; we’re going moose hunting!”

I had been putting in for a moose tag in Washington for 9 years and my dad had been putting in for one for 18 years. It was at that moment that I knew I had to start planning for the hunt. I contacted many people from around the state to gain more knowledge on the Shiras moose and some good areas to scout. I spent a full month researching maps and articles of the area I was drawn for before I made my first scouting trip.

Finally, in the middle of July, I had two consecutive days off from work, so I decided I should use the time to go scouting. I got a change of clothes and a tank of fuel and headed east on the nearly seven-hour drive to the other side of the state. Later that evening, I found myself in the small town of Chewelah, talking to some of the locals and the wildlife biologists for that region. I had gotten a hotel room for the night and spent the next day up in the mountains checking out some hotspots I was told about. With the temperatures reaching nearly 80 degrees during the day, I had not seen much wildlife. Sadly, that night, I had to turn around to make the seven-hour drive back home to get ready for work the next day.

Once I returned home, I was back to studying maps and started practicing my calls while I waited for the summer heat to cool down. About six weeks later, at the beginning of September, I arranged a three-day weekend from work so my dad and I could load up our ATV and go for another short trip. This time, the weather had cooled down a little bit, but not much. We found some new areas to explore and started to see more wildlife. It was on this trip that I had spotted my first Shiras moose, a cow with its calf. We also saw many bear, cougar, and wolf tracks, so we knew we had to keep our eyes open while hiking. Before we knew it, this short-lived trip was over and we had to journey back home for work.

During the month of September, I learned and mastered both cow and bull calls. I would practice this almost every day in my car while heading to and from work. Once I found out I was getting a three-day weekend from work in the beginning of October, I was chomping at the bit, waiting to get back over to Chewelah to do more scouting. On this trip, I mounted a canopy on the back of my truck so I could sleep in the mountains to maximize my time searching for moose. On the second day of this trip, I called in a mature bull within 50 yards of me. My heart was racing. Later that night as I was getting ready for bed in the canopy of my truck, a wandering bear walked into my camp and rubbed up against the side of my truck. I had to spook it off. Once I woke up the following morning, I had to get ready to yet again go home.

Two short weeks later, I felt the urge to call in sick to work and make my fourth and final scouting trip before the hunt. For this trip, my mom rode with me. Once we got back over there, we found it had already started snowing in some of the higher elevation areas we had been scouting, which were close to 5,700 feet. On this trip, we saw a cow on the first day and a nice mature bull on the second day. The bull was about 40" wide and just starting to rut. This really got my blood pumping, and I could not wait for my November hunt to begin.

I had been counting down the days until the hunt, and then it was finally November 13th. I had just gotten home from nearly a week in Las Vegas with my girlfriend where we watched the Professional Bull Riding World Championship. My parents and I had our truck and camper loaded with our gear and were headed east to Chewelah for my hunt. Once we were there, we had camp set up with snow on the ground and we knew it was going to be a cold hunt.

The next morning, we got ready and headed up the mountain to the area I had scouted. We got into about 18 inches of snow and spotted a young, immature bull moose. It was a slow day with all of the snow. Once we got to camp that night, we came up with a game plan for the next day.

We spent the second day in the high country hiking and driving, looking for tracks to follow. After yet another slow day of not seeing much, we had a snowstorm set in that afternoon that would last all night and bring eight inches of fresh snow. Around 3 p.m. on the second day, we decided to drive a little more through the deep snow before we turned around to head back to camp for the night. As we were rounding the last corner in the road, my dad spotted a moose standing at 250 yards above us on a hillside. As I looked up at it, I could see the massive paddles sticking out against the snow. I had enough time to lie down in the cold, deep snow and use my backpack for a rest. I took one shot with my .300 Remington Ultra Mag and double lunged the massive beast. He took four steps before falling down.

We got calmed down and made the trek up the hillside to the bull where I had shot him. We had about an hour until total darkness, and the snow was not about to let up at all. By the time we got enough pictures and got him skinned out, it was already dark out. We were able to pack out half the meat that night and had to leave the other half until the following morning. When we got back to the truck that night, I was soaked to the bone and so cold that my hands were becoming numb.

The following morning, we left camp at daybreak and started driving back up the mountain to pack out the rest of the meat. When we got back to the place where we’d left the meat, there was eight inches of fresh snow on it. We split up the rest of the meat and made the hike back down the hillside to the truck. When we got back to camp, we were finally able to relax that afternoon. We spent the next day sightseeing in the area before we had to pack everything up and make the long journey home.

Once I was home, I measured the antlers at 39 inches wide. I spent the next couple of days processing all of the meat and unpacking our camper. This hunt was a huge success thanks to Huntin’ Fool where I was able to research and contact other people who have had this tag before.